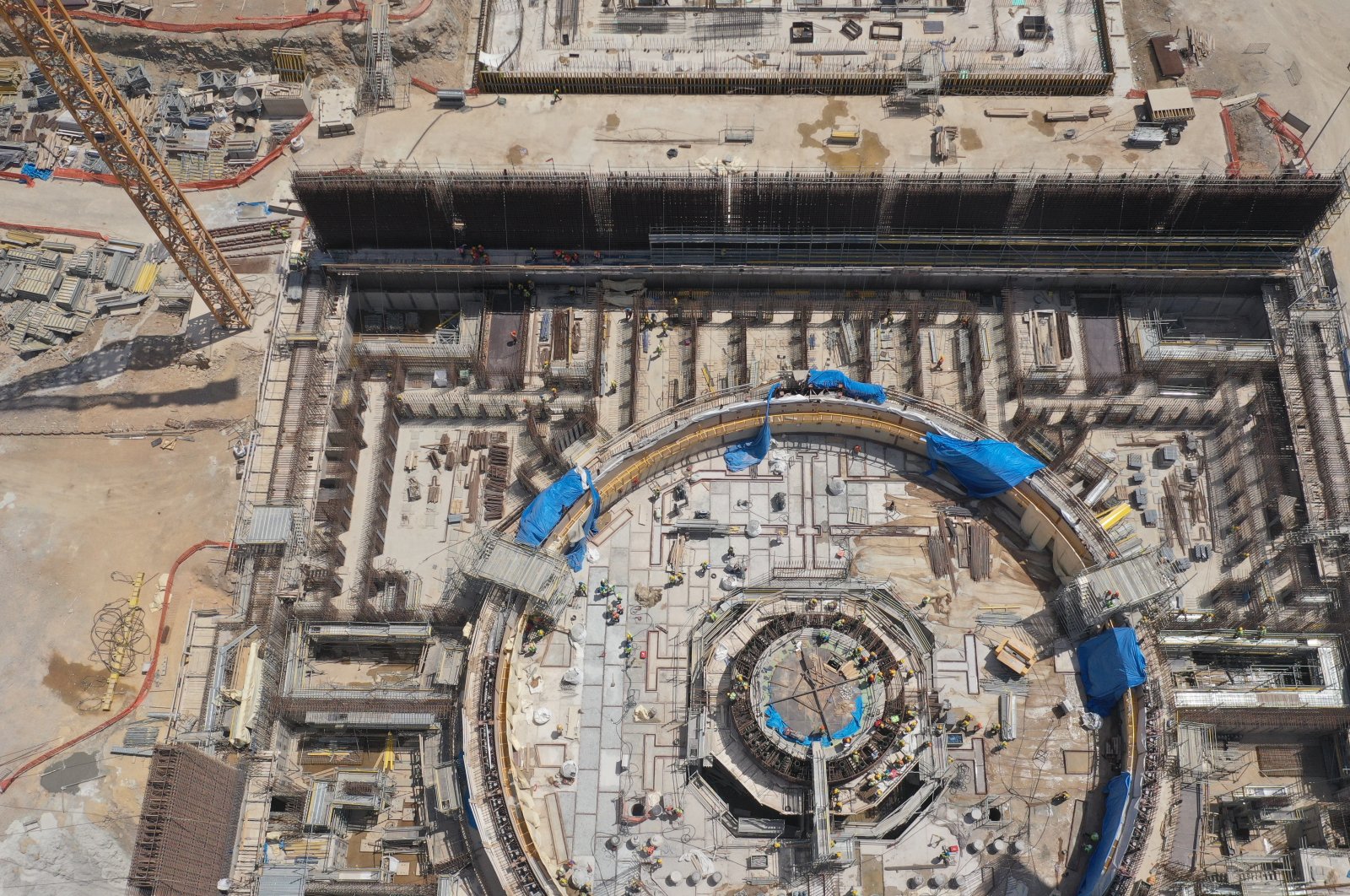 Dönmez stated that they aim to put the first unit into operation at the Akkuyu Nuclear Power Plant in 2023. “We plan to commission the second unit in the following year," he added.

Dönmez examined the ongoing construction with Akkuyu Nuclear Inc. General Manager and Chairman Anastasia Zoteeva during his visit to the power plant Friday.

The power plant is set to consist of four units with 1,200 megawatts (MW) capacity each.

Licensing and pre-construction preparations for the third and fourth units are also ongoing, the minister noted, stressing that the plant will meet approximately 8%-10% of the country's current electricity consumption when it starts operating at full capacity.

Dönmez stated that approximately 6,700 people work in the field and almost 90% of those working in the field are Turkish citizens and Turkish engineers.

Experts from Russia and different countries around the world, which bring critical expertise, are also here, he added.

The plant is expected to employ around 3,000 people, including engineers and technicians.

An intergovernmental agreement was signed between Turkey and Russia in May 2010 for Akkuyu, the first nuclear plant of Turkey that will have four VVER-1200 power reactors with a total installed capacity of 4,800 MW.

The plant's groundbreaking ceremony was held on April 3, 2018, with the participation of President Recep Tayyip Erdoğan and his Russian counterpart Vladimir Putin via videoconference call from Ankara.

Dönmez, in a recent live broadcast, said one of the most important political and strategic objectives under the national energy and mining policy is using more domestic resources to recover from dependence on foreign sources.

"We have focused on our hydrocarbon exploration in the seas in recent years,” he said, pointing out that the country increased its technical capacity with two seismic research vessels and three deepwater drillships.

Before acquiring seismic research and drilling vessels, the Turkish Petroleum Corporation (TPAO), Turkey's national oil company, was conducting these works with international foreign partners, however, the minister underlined: “We wanted to make things ourselves, both with our own human resources and with our own technical means. Especially in very strategic commodities such as oil, natural gas and energy, there are times when you cannot receive such services even if you have money.”

Turkish Petroleum has carried out some six deepwater drilling projects in conjunction with international partners previously in the Black Sea and 10 shallow-water drillings. It has also most recently discovered natural gas resources with its own drilling capacities, the minister noted.

After nearly 1 1/2 months of preparation, Fatih will start its first drilling activities in the Black Sea in the Tuna-1 zone in mid-July.

The Tuna-1 zone is located off the mouth of the Danube block in the crossroads between Bulgarian and Romanian maritime borders with the inland waters of Turkey.

Turkey's first seismic vessel, Barbaros Hayrettin Paşa, had earlier carried out seismic surveys in the Black Sea and had identified rich reserves of natural gas in the Danube block in Turkish seawaters of the western Black Sea.

Romania and Bulgaria have been producing oil and gas for many years in the Danube block.

On the other hand, Turkish drilling procedures in the Eastern Mediterranean fall under two categories: licensed areas issued by the Turkish Republic of Northern Cyprus (TRNC) to Turkey and the licensed areas that are issued by Turkey to Turkish Petroleum.