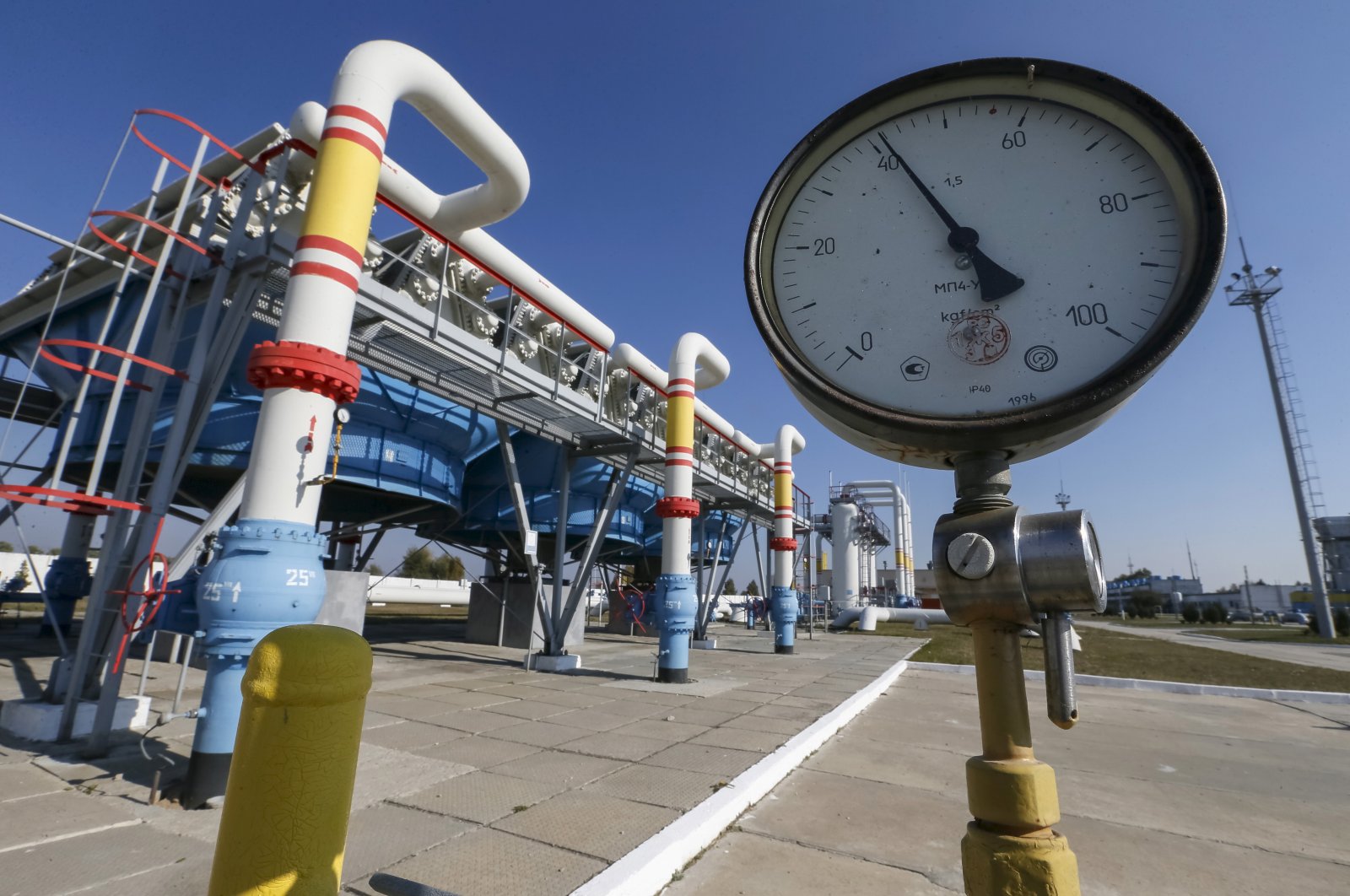 A pressure gauge is seen at a gas compressor station and underground gas storage facility in the village of Mryn, north of Kyiv, Ukraine, Oct. 15, 2015. (Reuters Photo)
by DAILY SABAH WITH AGENCIES Oct 20, 2021 1:51 pm
RECOMMENDED

Gas storage levels at European facilities have dropped by 20.5% year-on-year from January through September of this year, according to data from Gas Infrastructure Europe.

The data sparks fears ahead of the crucial winter heating season, exacerbating the risk of further price spikes from already record-high levels.

Storage sites were 95% full, totaling approximately 108 billion cubic meters (bcm), as of Sept. 30 last year. This level saw a drop of 23 bcm to 85 bcm in the January-September period this year, the data showed, which makes the sites 74.6% full.

Currently, the country with the most gas in its storage is Italy with 17.6 bcm followed by Germany with 16.5 bcm and France with 12.4 bcm.

Outside the EU, storage capacity in the U.K. is full, containing 1 bcm of natural gas. Poland follows with a 96.32% rate, totaling 3.5 bcm of gas in storage.

The countries with the lowest storage occupancy rates are the Netherlands with 14.8%, Austria with 56.8% and Portugal with 59.2%.

These rates represent a dramatic decline from those recorded on Sept. 30 last year when the Netherlands’ storage rate was 90.93%, Austria’s rate was 90% while Portugal’s rate was 98.7%.

Ukraine similarly showed a massive drawdown in stocks from a storage rate of 76% in September last year to 44% this September.

Why is storage empty?

Gas storage is used as a buffer at times of high demand and tight supply. The low levels seen now – shortly before the end of the restocking phase in Europe’s gas market – are a cause for concern, market observers have said.

The winter gas season, when prices are typically higher and more gas is withdrawn from storage to meet demand, began on Oct. 1 and will continue until the end of March.

The increase in energy demand from the extreme heat in the summer months caused more withdrawal of gas from storage.

This was coupled with a fall in Russian gas supplies to Europe via Ukraine and an electricity production decrease from hydroelectric power plants due to dry weather conditions.

Experts predict that European countries will experience greater problems if the winter this year is colder than expected.

Russia supplies natural gas to Europe through its energy giant, Gazprom, either through long-term contracts or on one-off trading agreements on the spot market.

However, Fatih Birol, head of the International Energy Agency (IEA), said in his latest statement that Russia is capable of sending 15% more gas to Europe than the current volumes.

Experts contend that Russia is using the contentious Nord Stream 2 gas pipeline, the construction of which has been completed despite encountering various obstacles and being deemed undesirable by many European countries, to gain leverage in Europe, showing its necessity to transmit much-needed gas to Europe.

Gas flows through the pipeline carrying Russian gas to Europe could start in the fourth quarter.

A Gazprom-led consortium will use the Nord Stream 2 pipeline to carry gas under the Baltic Sea to Germany. An energy regulator in Germany still must approve compliance with energy company laws.