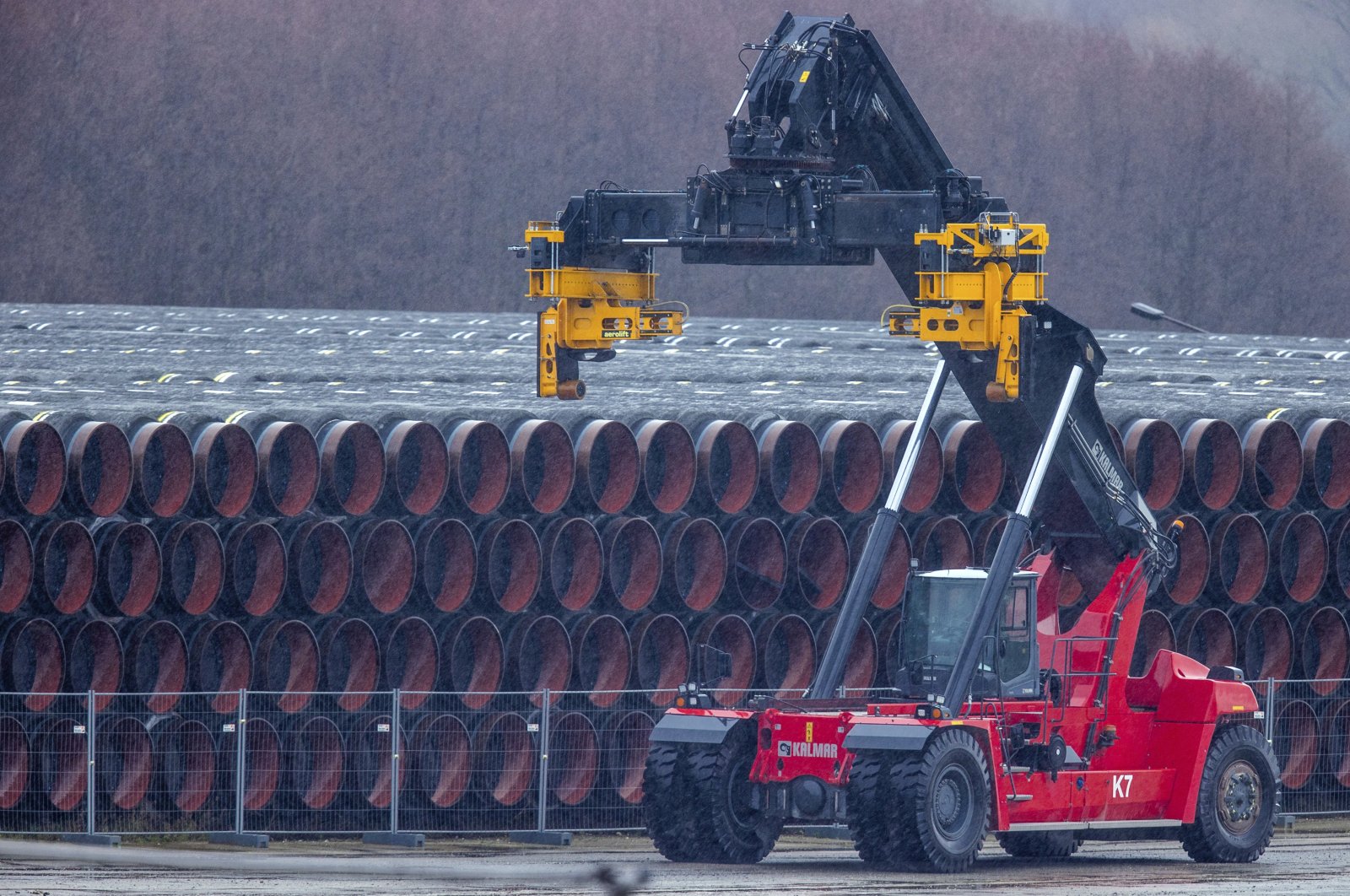 A special vehicle used to transport pipes for the Nord Stream 2 natural gas pipeline stands next to pipes at a storage yard in the port of Mukran in Sassnitz on the island of Ruegen, Germany on Jan. 6, 2021. (AP Photo)
by REUTERS Jan 13, 2021 3:25 pm
RECOMMENDED

The U.S. State Department this month told European companies which it suspects are helping to build Russia's Nord Stream 2 gas pipeline that they face the risk of sanctions as the outgoing Trump administration prepares a final round of punitive measures against the project, two sources said Tuesday.

"We are trying to inform companies of the risk and urge them to pull out before it's too late," a U.S. government source said on condition of anonymity.

The U.S. source said the State Department is expected to issue a report by Thursday or Friday on companies it believes are helping the Russia-to-Germany pipeline. Companies that could be in the report include ones providing insurance, helping to lay the undersea pipeline, or verify the project's construction equipment, the source said.

The companies could be at risk of U.S. sanctions under existing law if they do not stop work.

Zurich Insurance Group could be listed in the report, the source said. The company did not immediately respond to a request for comment.

Nord Stream 2 also did not immediately respond to a request for comment.

The $11 billion pipeline, one of Russia's most important projects in Europe, has sparked tensions between Washington and Moscow.

The Trump administration opposes Nord Stream 2, which would deprive Ukraine of lucrative transit fees, saying it would increase Russia's economic and political leverage over Europe. The administration has also pushed exports of U.S. liquefied natural gas to Europe, a fuel that competes with pipelined gas from Russia.

Germany, Europe's biggest economy, also says the pipeline is simply commercial. It needs gas as it shuts coal and nuclear plants on environmental and safety concerns.

U.S. President-elect Joe Biden opposed the project when he was vice president under Barack Obama. It is uncertain whether he would be willing to compromise on the project after Jan. 20 when he takes over.

Gazprom halted Nord Stream 2 construction for a year after U.S. sanctions in December of 2019. But work has resumed as Gazprom hopes to complete the Nord Stream 2 pipeline under the Baltic Sea to double the existing line's capacity. The project is 90% completed with only a 62-mile (100-km) stretch in deep waters off Denmark left to complete.

A U.S.-based industry source who has seen the State Department communications said European companies, including German ones, received inquiries from the Trump administration over the past several months, dating back to October, about their activities relating to Nord Stream 2.

The State Department asked the companies in October if they were involved with Nord Stream 2 and whether any work continued after July 15, and the value of any services or support.

On that date, U.S. Secretary of State Mike Pompeo warned investors in Russia's Nord Stream 2 and Turkstream pipelines that they could face sanctions under the Countering America's Adversaries Through Sanctions Act of 2017.

On Jan. 1, the State Department reached out again with an urgent request, the industry source said, asking to set up a call that weekend with the Bureau of Energy Resources to discuss the details of the companies' wind-down activities.

The State Department did not immediately respond to a request for comment.