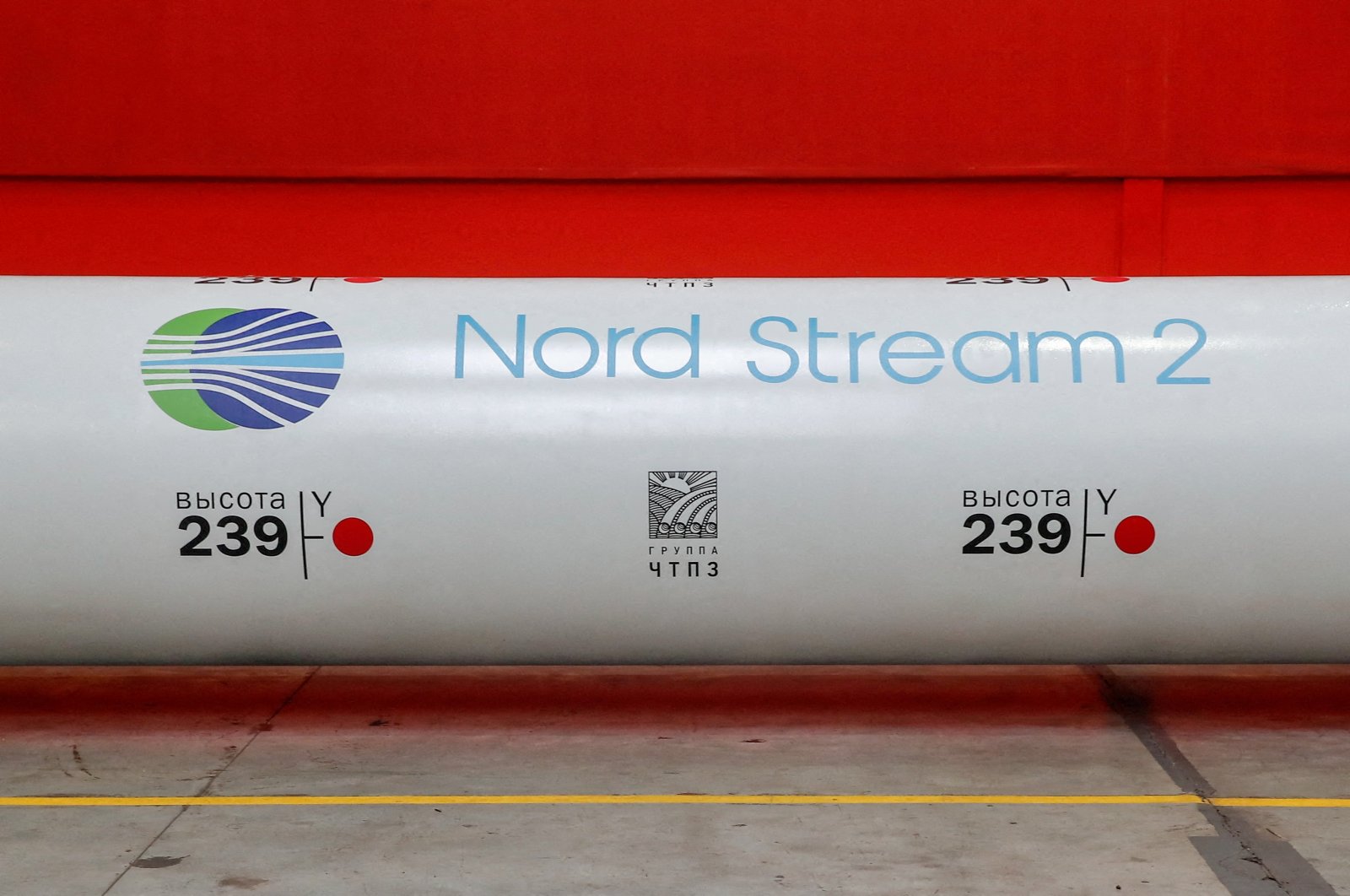 The logo of the Nord Stream 2 gas pipeline project is seen on a large-diameter pipe at the Chelyabinsk Pipe Rolling Plant owned by ChelPipe Group in Chelyabinsk, Russia, Feb. 26, 2020. (Reuters Photo)
by Reuters Jan 10, 2022 3:12 pm
RECOMMENDED

A pipeline that usually sends gas from Russia to Europe was stuck in reverse after three weeks on Monday, pushing up prices in Europe at a time of political tension between Moscow and the West.

Wholesale prices in Europe were up 5% on Monday as gas on the Yamal-Europe pipeline flowed east from Germany to Poland, adding pressure on the market along with lower wind output and a pessimistic weather outlook.

It has now been flowing eastwards since Dec, 21, data from German network operator Gascade showed.

Industry sources and analysts said last month that traders were preferring to take gas from stockpiles to supply European buyers and avoid paying near record-high prices. As Russian gas company Gazprom has not seen bids for westbound exports, the pipeline has switched flows.

Russian energy exports have been in the spotlight during a diplomatic standoff between Russia and the West, including over a Russian troop buildup near neighboring Ukraine, which is trying to forge closer ties with NATO.

United States and Russian officials held talks in Geneva on Monday which Washington hopes might avert the danger of a Russian invasion of Ukraine, but diplomats on both sides sounded pessimistic before they began.

Some European Union lawmakers have accused Russia, which supplies more than 30% of the bloc's natural gas, of using the crisis as leverage. They say Moscow is restricting gas flows to secure approval to start up the newly built Nord Stream 2 pipeline, which will supply gas to Germany.

Russia has denied the allegations, and says the pipeline will boost gas exports and help alleviate high prices in Europe. It has said it is meeting its contractual obligations on gas deliveries.

Moscow also denies U.S. assertions that it is planning an invasion of Ukraine, where it has been accused of building up forces in the east of the country.

Eastbound volumes on the Yamal pipeline stood at 7 million kilowatt hours an hour (kWh/h) on Monday, data from the Mallnow metering point on the German-Polish border showed.

The pipeline carries about one sixth of Russia's annual gas exports to Europe and Turkey.

It is not clear when the pipeline will change the flows back towards Germany, though a source close to Gazprom has said the company is expected to switch flows back at some point this month.

Preliminary Gascade data show the shipments are expected to remain in reverse at least until the early hours of Tuesday.

Adding to the European gas market pressure, Gazprom said on Monday that it did not plan to hold spot gas sales this week.

The reverse flows have contributed to high wholesale prices in Europe, with some energy companies going bankrupt in recent months, and consumers have also felt the impact.

Benchmark gas price reached an all-time high last month of more than 180 euros (about $203) per megawatt hour, compared with 19 euros at the start of 2021.

Prices have eased to below 100 euros, helped in part by arrivals of liquefied natural gas (LNG) shipments in Europe, but were trading up 5% on Monday at 88 euros on limited Russian supply and a forecast of lower temperatures.

Capacity nominations for Russian gas flows from Ukraine to Slovakia via the Velke Kapusany border point, another major route for Russian gas to Europe, stood at 287,321 megawatt hours (MWh) per day.

That level was steady compared to nominations seen since the end of last week but remained below levels of more than 900,000 recorded in early December, data from Slovak pipeline operator Eustream showed.