From an American foe to a friend: OPEC turns 60 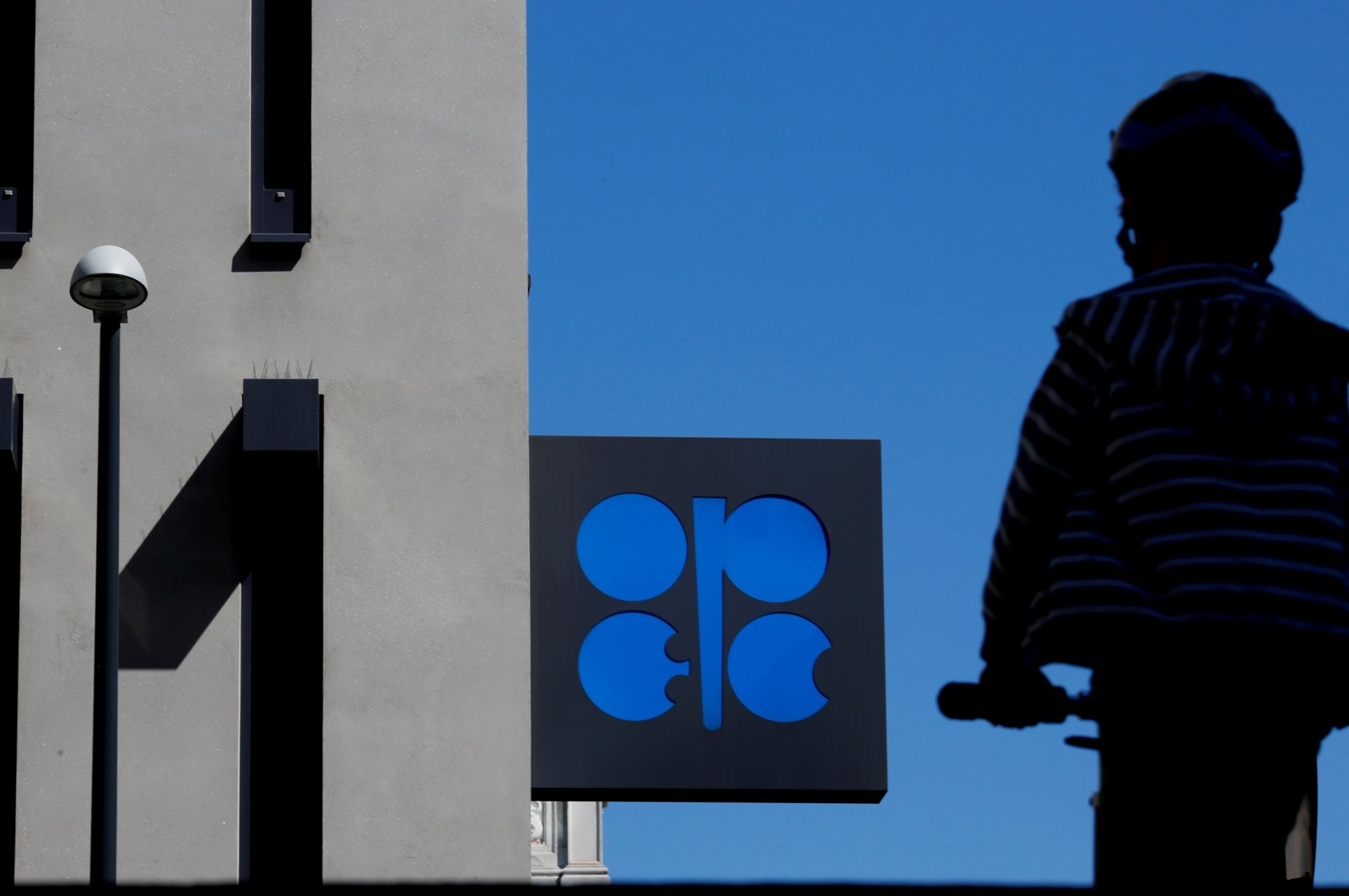 A person passes the logo of the Organization of the Petroleum Exporting Countries (OPEC) in front of its headquarters in Vienna, Austria on April 9, 2020. (Reuters Photo)
by REUTERS Sep 13, 2020 11:42 am

In 1973, Arab members of the Organization of Petroleum Exporting Countries (OPEC) brought the U.S. economy to its knees. Now, the 60-year-old cartel is more likely to do Washington’s bidding.

Since Saudi Arabia and other Arab OPEC members imposed their famous oil embargo as retribution for U.S. support for Israel during the Yom Kippur War, shifts in global politics and a surge in America’s oil production have tamed the group.

OPEC’s most hawkish members, Iran and Venezuela, have been sidelined by U.S. sanctions while its kingpin, Saudi Arabia, has shown it would rather appease Washington than risk losing U.S. support, current and former OPEC officials say.

While OPEC as a bloc resisted U.S. pressure to lower oil prices for decades, notably in 2011 during the uprising against Libya’s Moammar Gadhafi, its record over the past three years has largely been one of capitulation, these officials say.

Founded in Baghdad on Sept. 14, 1960, to counter the power of seven U.S. and British oil companies, OPEC has repeatedly yielded to pressure from Washington to pump more product since U.S. President Donald Trump took office at the start of 2017.

And when prices got too low for U.S. drilling companies to make money this year, OPEC hashed out a deal to bring them back up slightly, in an agreement spurred on by Washington's threat to reduce its military backing for Riyadh, sources have told Reuters.

“Trump orders from Saudi Arabia what he needs for the oil price – and he is served,” Chakib Khelil, who was Algeria’s oil minister for a decade and OPEC’s president in 2001 and 2008, told Reuters. “So indeed OPEC has changed.”

Reuters spoke to eight current and former OPEC officials, representing over a third of the group’s output, as well as analysts, traders and investors to ask how U.S. sanctions on Iran and Venezuela had affected Saudi Arabia’s influence within OPEC, and whether that had changed the dynamic with Washington.

Saudi Arabia has been the leading OPEC producer for decades, giving it the biggest sway over policy, but the sidelining of Iran and Venezuela has only increased its influence.

Iran’s share of OPEC output has nearly halved to 7.5% since 2010 while Venezuela’s has collapsed to 2.3% from almost 10%, according to Reuters calculations based on OPEC data. Saudi Arabia’s share, meanwhile, has risen 7 percentage points to 35%.

Iran and Venezuela, which founded OPEC along with Iraq, Kuwait and Saudi Arabia, had routinely opposed any moves to bring oil prices down in the face of U.S. pressure.

The increased dominance of Saudi Arabia within OPEC has also come at a time of higher U.S. oil and gas production, which has turned the United States into the world’s biggest petroleum producer and slashed its dependence on foreign fuel.

U.S. production more than doubled in a decade to reach over 12 million barrels a day in 2019, according to the Energy Information Administration (EIA), as improved drilling technology made previously untapped basins accessible.

OPEC figures show the U.S. share of the global oil market has doubled since 2010, while OPEC’s has fallen.

OPEC teamed up with Russia and nine other oil producers in 2016 to form a group known as OPEC+ to boost their collective leverage but a senior Trump administration official said even the new group’s influence had waned as U.S. output soared.

‘OPEC is at it again’

Trump has engaged more actively with OPEC than his predecessors, often taking to Twitter to comment on production decisions and oil price moves.

Trump has also developed a close relationship with Saudi Arabia’s de facto ruler, Crown Prince Mohammed bin Salman (MBS), who relies on the United States for weapons and protection against regional rivals such as Iran.

“There has never been a U.S. administration more involved in international oil policy and OPEC than the Trump presidency,” said Gary Ross, founder of Black Gold Investors and an OPEC expert.

In 2018, as oil prices spiked over $70 a barrel, a level Washington viewed as too high for U.S. consumers, Trump fired a barrage of tweets at the cartel.

“Oil prices are too high, OPEC is at it again. Not good!” he tweeted on June 13, 2018, nine days ahead of an OPEC meeting. As OPEC gathered in Austria on June 22, Trump wrote: “Hope OPEC will increase output substantially. Need to keep prices down!”

Later that day, OPEC agreed to raise its output by a million barrels a day.

Two OPEC officials, who asked not to be identified due to the sensitivity of the issue, said a Trump intervention on oil prices effectively nudges the organization to discuss, or even adjust, its production policy.

And Trump’s Twitter feed has become a source of anxiety.

“I hope no tweet will follow,” one top OPEC official told Reuters on April 9, 2019, after oil prices hit $71 a barrel, a five-month high at the time.

Oil market watchers including OPEC officials say the irony is that the price rises in 2018 and 2019 were both due mainly to Washington’s sanctions on Iran and Venezuela, policies that slashed some 3 million barrels off daily oil production.

Oil prices had tanked because of a supply glut caused by a price war between Saudi Arabia and Russia just as there was a collapse in demand due to worldwide coronavirus lockdowns.

“Just spoke to my friend MBS (Crown Prince) of Saudi Arabia, who spoke with President Putin of Russia, & I expect & hope that they will be cutting back approximately 10 Million Barrels, and maybe substantially more which, if it happens, will be GREAT for the oil & gas industry!” Trump tweeted on April 2.

On April 12, OPEC+ agreed to a record cut in production equivalent to a 10th of global output.

Reuters reported on April 30 that Trump had presented MBS with an ultimatum: cut production or risk a withdrawal of U.S. troops from the kingdom.

Asked about his pressure at the time, Trump said: “I didn’t have to tell him.” He said he had spoken to MBS by phone and they were able to reach a deal on production cuts.

“In sum, OPEC does not make decisions anymore on what is best for its members economically, as it is supposed to according to its statutes,” Algeria’s Khelil said.

In 2011, when Libyan output was hit by the uprising against Gadhafi, Saudi Arabia tried to convince OPEC to lift production to lower prices but Algeria, Angola, Ecuador, Iran, Iraq, Libya and Venezuela all resisted.

“Previously, you had a bloc which could become quite vocal and actually upend meetings,” said Samuel Ciszuk, who founded consultancy ELS Analysis and used to work for the Swedish Energy Agency.

“Now, Iran and Venezuela still have votes but they are sidelined and have such desperate economic and marketing situations that other countries are more careful about lining up politically with them,” he said.

Iran’s former OPEC Governor Hossein Kazempour Ardebili told Reuters in 2018, when OPEC+ had just raised output following pressure from Trump, that both OPEC and the broader group had begun acting against the interests of their smaller members.

“They gave an oil price gift to Trump while inflicting revenue loss on all OPEC members,” he said.

While there is no suggestion OPEC is about to suffer an exodus of smaller members as a result of the shifting dynamic, and there have been new entrants, some countries have left.

Qatar quit in 2019, partly due to a political row with Riyadh. Another small producer, Ecuador, left this year and Indonesia departed in 2016. Both said they did not want to be constrained by OPEC production quotas.

Others that may be unhappy with OPEC’s trajectory, however, plan to remain so they can still have a say.

As one source familiar with Iran’s oil policy said, “It’s important to be a member of OPEC or OPEC+ so that you can maximize your interests.”