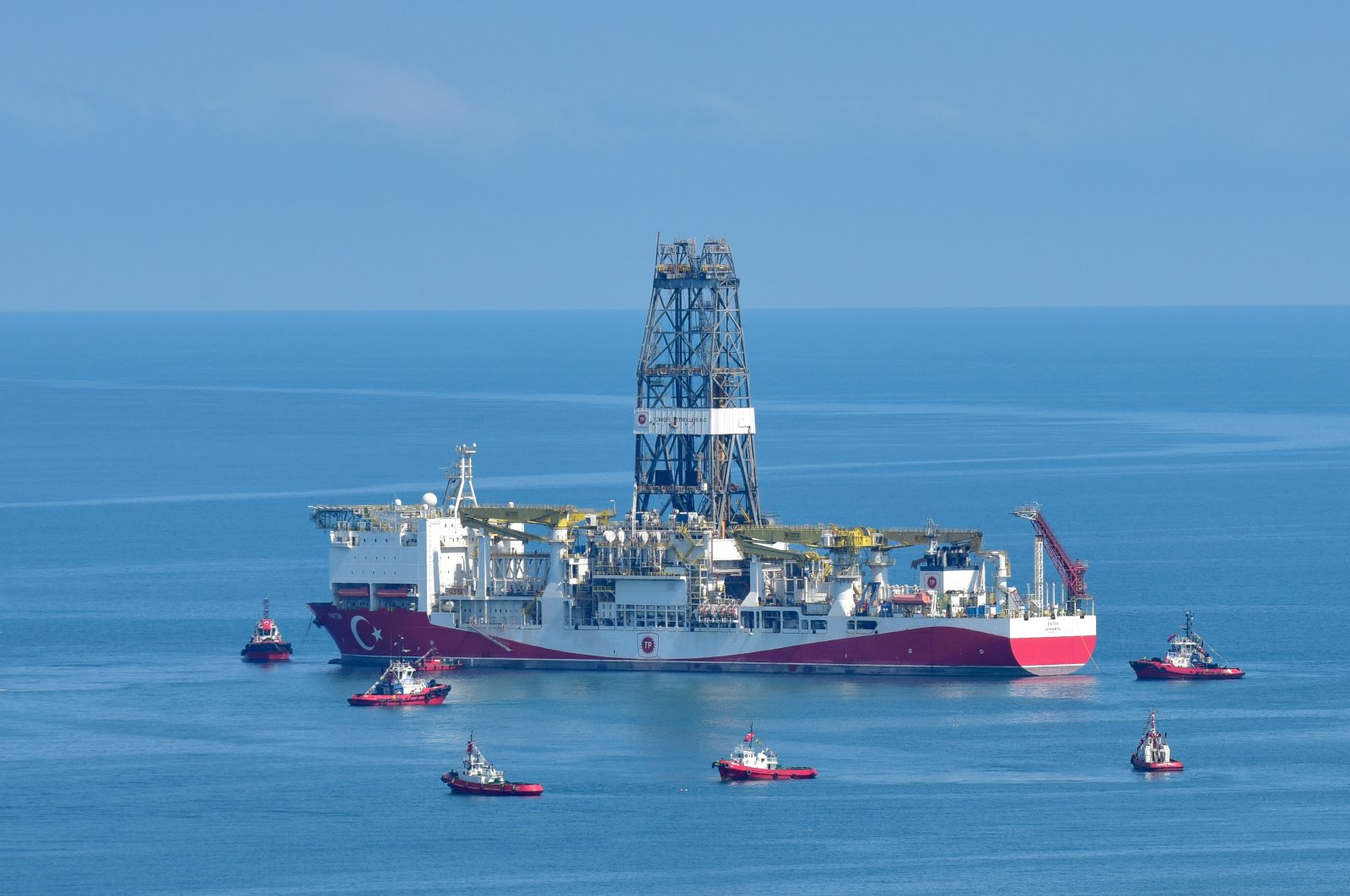 Sector representatives and experts say the discovery will offer a particularly important advantage in the ongoing price negotiations with countries from which Ankara purchases gas and in revising existing contracts.

The gas discovery was made at a depth of 2,100 meters, Dönmez said earlier, with drilling extending another 1,400 meters below the sea bed. "We will go down a further 1,000 meters ... and data suggests we will probably find gas there too."

Investment and consultancy company, APLUS Energy's Volkan Yiğit told Anadolu Agency (AA) on Sunday that the discovery in the Sakarya Gas Field came at a very advantageous time for Turkey as the country’s long-term natural gas supply contract for 16 bcm will end in 2021.

Turkey – a country that is 99% dependent on imports, via pipelines and liquified natural gas (LNG) – increased its natural gas production to 473.8 million cubic meters by the end of 2019 while the amount of imported gas hit 45.2 bcm. Russia has always been the biggest natural gas exporter to Turkey, followed by Azerbaijan and Iran.

In 2019, Moscow’s share, which decreased last year, came to 33.6%, while Azerbaijan and Iran supplied 21.2% and 17.1%, respectively. The remaining 28.1% was met with liquid natural gas (LNG) purchases made from various countries, including Algeria, Nigeria, Qatar, the U.S., Trinidad and Tobago, and Norway.

Yiğit said in recent years, several positive steps have been taken to diversify the country’s supply channels and improve deals with trading partners. With a focus on infrastructure and LNG investments, in terms of gas storage and transmission, Yiğit said that with LNG and floating LNG agreements, Turkey had succeeded in reducing its share of oil-based pipeline gas contracts.

The country has started to reap the benefits of those investments this year, Yiğit said, as it has benefited from lower LNG prices brought about by the pandemic by storing the cheaper purchases.

"These steps were taken, of course, not only for cheaper LNG procurement but also to strengthen our hands in extending or renewing existing contracts, especially with Russia's state-owned Gazprom," Yiğit said.

"We are aware of the discounts made by Gazprom when sitting at the table with other countries in similar situations or the changes made in favor of the buyer. While successful steps have been taken with this regard and contract renewal negotiations are ongoing, both the low prices in the global markets and our natural gas discovery can put us in a very advantageous position," Yiğit said.

Indeed, the majority of Turkey’s long-term gas contracts are close to the end of their duration and the share of more affordable LNG has been increasing.

The long-term contacts between Gazprom and Turkey's Petroleum Pipeline Company (BOTAŞ), along with private sector companies, for 8 bcm of gas expires in 2021. Similarly, a contract signed with Azerbaijan for the purchase of 6.6 bcm of gas also expires in the same year, along with one with Nigeria for 1.3 bcm of LNG.

Accordingly, price negotiations on how the future of Turkey’s long-term gas contract – involving 45 bcm of natural gas, mainly from Russia – will be shaped is now being discussed.

Pointing out that the price formula in the contracts with Gazprom was determined depending on certain petroleum derivatives, Yiğit said Turkey from time to time had to pay very high prices on a dollar basis, especially during periods in which the oil price increased.

Turkey paid over $20 billion for its gas imports in 2014, when the price of oil stood at around $120 per barrel. The country's gas import bill dropped between $10-15 billion in the following years.

He added that with the increase of the country’s production following the discovery, the weighted average cost was set to fall in the gas market. "Because our cost of producing natural gas from the reserve will fall to below our current contract prices under any circumstances," he said, noting that “to predict the effects the discovery will have on the trade side of the domestic market, we will wait for the formulation of a strategy over how to integrate this gas into trade."

Burak Kuyan, chairman of the Energy Trade Association, said the gas is just the beginning of a series of variables that will bring many strategic advantages.

Kuyan said the discovery was more likely a game changer for the country as it was estimated that the reserve amount to be drilled from the area could come to 5 bcm annually, which corresponds to some 10% of the country’s yearly natural gas consumption.

"It will provide predictability and sustainability in terms of natural gas trade since the amount of the oil-indexed imported gas is set to decrease, price of which depending on emerging factors that we had previously no control over," he said.

He highlighted that a more complex issue in terms of trade was the predictability of the price rather than the price itself.

Kuyan emphasized that the effect of this recent development would not only be limited to natural gas prices but would able the country to produce electricity cheaper than Europe since it can distribute cheaper gas to the markets.

"When industrialists use cheaper electricity, this automatically increases their export potential," he said, underlining that therefore, it is the first step in a process that will accelerate both electricity and the natural gas trade.

Petroleum Products Employers' Association (PÜIS) Chairman Imran Okumuş also referred to the discovery as a turning point for Turkey, a country that imports the majority of the energy it consumes.

He said they were hopeful about future discoveries not only in natural gas but also in petroleum, which is rather significant for both supply security and the national economy.

An average of 48.7 bcm of natural gas has been consumed in Turkey over the last four years, according to Energy Market Regulatory Authority (EPDK) data. Accordingly, it is estimated that the 320 bcm of natural gas found by the Fatih drillship at the Tuna 1 well, in the Sakarya Gas Field, which is around 170 kilometers off the country's Black Sea coast, could meet Turkey’s energy needs for seven years. Economists calculate that the annual cost of natural gas imports is above $10 billion-$13 billion which means the discovered reserve can contribute up to $10 billion to the current account deficit.

"Globally, gas prices are oil-indexed. We can say that the economic value of 320 bcm of natural gas reserves discovered in the Black Sea could reach $65 billion if we look at it from a perspective of gas prices over the last three to five years," Energy Minister Dönmez also told public broadcaster TRT earlier Friday.

"This discovery, even if we do not find any further reserves, can meet the needs of our country for about seven to eight years, but of course explorations will continue and perhaps this figure will increase even more," Dönmez added.

Piri Reis University Vice-Rector, professor Erhan Aslanoğlu said in a report published by Turkish daily Dünya on Sunday that Turkey has been importing natural gas at relatively high prices, however, with the recent development, the amount to be saved may come to around $40 billion-$50 billion.

"As of today, this means a saving of $8 billion-$12 billion on an annual basis," he added.

Similarly, Sefer Şener of Istanbul University told the Turkish language daily, Dünya, that the natural gas reserve would make a series of contributions to Turkey’s economy on both micro and macro scales.

The energy cost of Turkish enterprises holds a significant share in total costs ranging from 15%-40%, he said. "Considering that the natural gas discovered can make a relative improvement in the energy costs of the real sector, our companies will have a more advantageous position on the global market and be more competitive," he added.

Speaking on the discovery's potential impact on macroeconomic indicators, Şener said, these would be positive, with a downward impact on inflation, which has been a pressing issue for the Turkish economy.

"When we look at the percentile contribution of the main components of inflation over the 2004-2019 period, energy ranks second with 14.6%, in addition to a 28% effect on food. Therefore, this will help to suppress inflation downward in the long run, as the reserve is expected to reduce energy costs," he said. "This development, which is expected to make an annual contribution of $9-$13 billion to the balance of payments, seems likely to have a relaxing effect on the exchange rate."

The discovery of the 320 bcm of gas reserves came after extensive research in the area, conducted by the Barbaros Hayrettin Paşa and MTA Oruç Reis seismic vessels, over the last two years.

Turkey’s first oil and gas drilling vessel, the Fatih, which started drilling in the location on July 20, 2020, discovered the well after a month of drilling.

The operation of the natural gas field will be handled by state-owned energy company the Turkish Petroleum Corporation (TPAO).