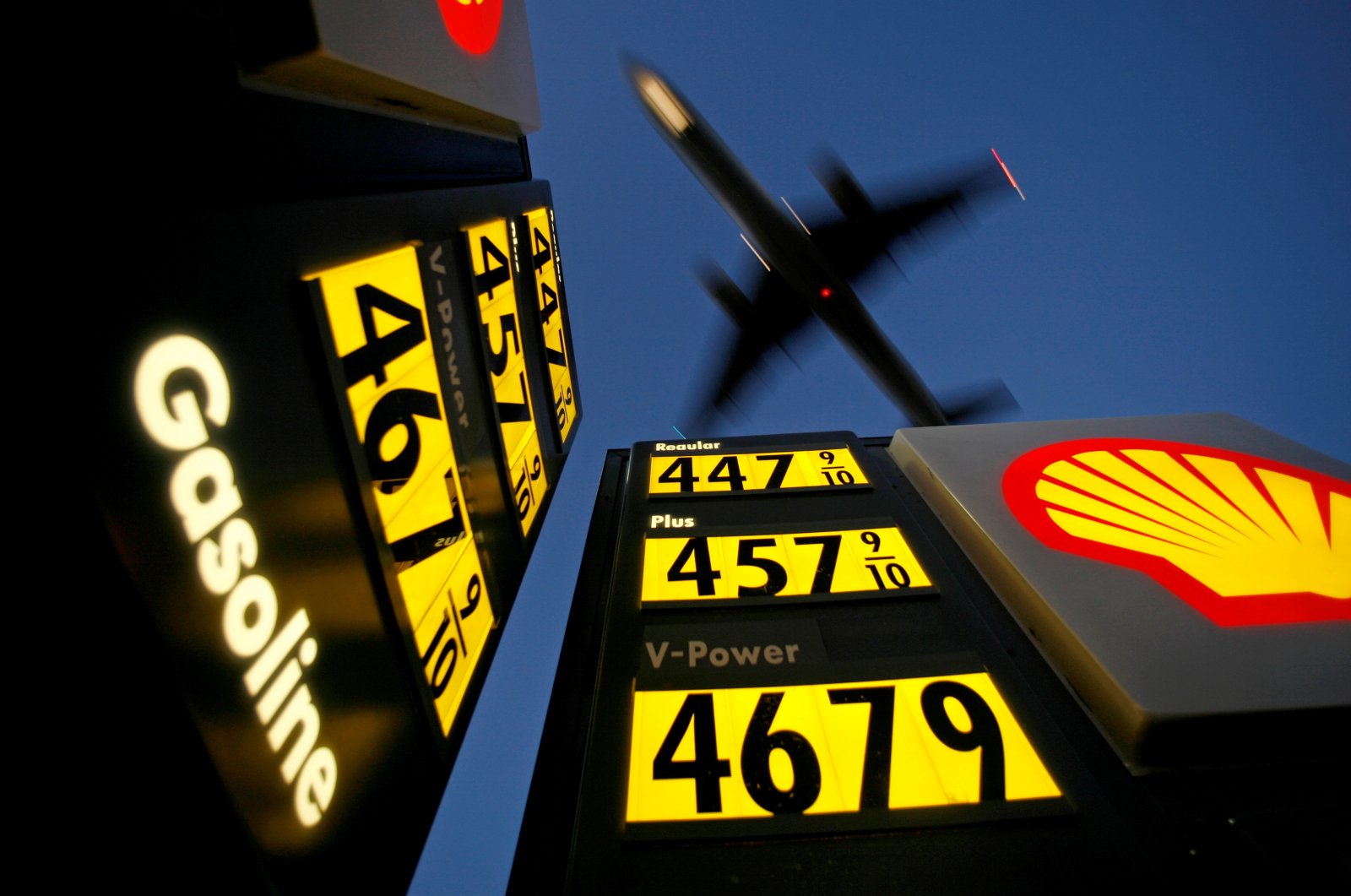 Gasoline prices are advertised at a gas station near Lindbergh Field as a plane approaches to land in San Diego, California, U.S., June 1, 2008. (Reuters Photo)
by REUTERS Jul 28, 2021 9:26 am
RECOMMENDED

The summer rebound in global fuel demand could quickly evaporate, as analysts expect gasoline consumption to taper off due to resurgent COVID-19 cases and structural changes in commuting patterns.

Gasoline demand in the United States, the world's top oil consumer, has nearly recovered to 2019 levels following the plunge in travel and business activity during the worst of the pandemic in 2020.

COVID-19 cases worldwide, however, have started to rise after largely falling in May and June, according to the Reuters global COVID-19 tracker, undermining the recovery.

Gasoline demand in the United States and Europe is hitting a plateau, and those two regions account for roughly a third of global petroleum consumption, making them key to the rebound in oil and refining markets.

Monthly growth in mobility and transport fuel demand are believed to have slowed in June, the International Energy Agency (IEA) said in a July report.

Currently, the energy watchdog expects global fuel demand to reach pre-pandemic levels by next year, but analysts say that could be pushed further out if COVID-19 infections and the slow pace of vaccinations worldwide further entrenches structural changes in demand – including more telecommuting and less air travel.

"We're still very much actively dealing with new cases here in the U.S. and also abroad, and that is putting greater pull on demand and what was originally anticipated for this recovery process in the middle of the summer for this year," said Devin Gladden, manager of federal affairs at motorist group American Automobile Association (AAA).

The IEA, which represents oil-consuming nations, also said in March that gasoline demand was unlikely to return to 2019 levels, in large part due to a shift to electric vehicles.

Global gasoline demand is expected to total 25.4 million barrels per day (bpd) this year, down 4.5% from 2019 levels, the IEA said in March.

Countries in Asia are restricting movements again, affecting travel patterns. Indonesia, Asia's top importer of gasoline, is grappling with the worst COVID-19 outbreak in Asia. The country, with more than 270 million people, now has Southeast Asia’s biggest caseload and is extending some restrictions.

The latest update of aggregated travel patterns Google collected from its users' phones showed retail and recreation visits fell from June 10 to July 22 by 21% in Indonesia and travel to work fell by 33%. Several other countries are dealing with outbreaks, including Vietnam, Thailand and Malaysia.

China's refineries continue to process oil at high rates, suggesting strong consumption, but the world's largest crude oil importer just announced a crackdown on the misuse of import quotas, which could cut its demand.

Fuel sales increased in early July in India as motorists took back to the roads after states eased COVID-19-related lockdowns, helping offset declines in other nations. However, crude imports by India, Asia's second top importer, fell to a nine-month low in June, after the lockdowns and low demand boosted inventories.

In Europe, road traffic has started to plateau following gains in May and June. Daily average gasoline and diesel sales at sampled gas stations in Britain have stagnated, while travel is declining in Russia.

Europe is one of the top consumers of global oil, taking in about 14% of the world's petroleum in 2017, according to the U.S. Department of Energy.

"While transportation demand is still improving in many countries, demand-flattening has started in some key consumers and conditions are deteriorating in others," Standard Chartered analysts said in a note.

England scrapped nearly all COVID-related curbs last week, while in Germany, Chancellor Angela Merkel warned more people needed to be vaccinated against COVID-19 before restrictions could be lifted in Germany.

Infections are rising in the United States, which consumes about a fifth of the world's oil. U.S. gasoline demand recently reached 9.4 million bpd, near levels not seen since 2019, but some analysts expect that demand to plateau.

Officials in some areas, like Los Angeles, are reinstating precautions like mask mandates due to the rise in COVID-19 cases.

Demand "has been tracking at around 2-3% below 2019 levels. That's a number you're going to continue to see," said Robert Campbell, head of oil products research at consultancy Energy Aspects.