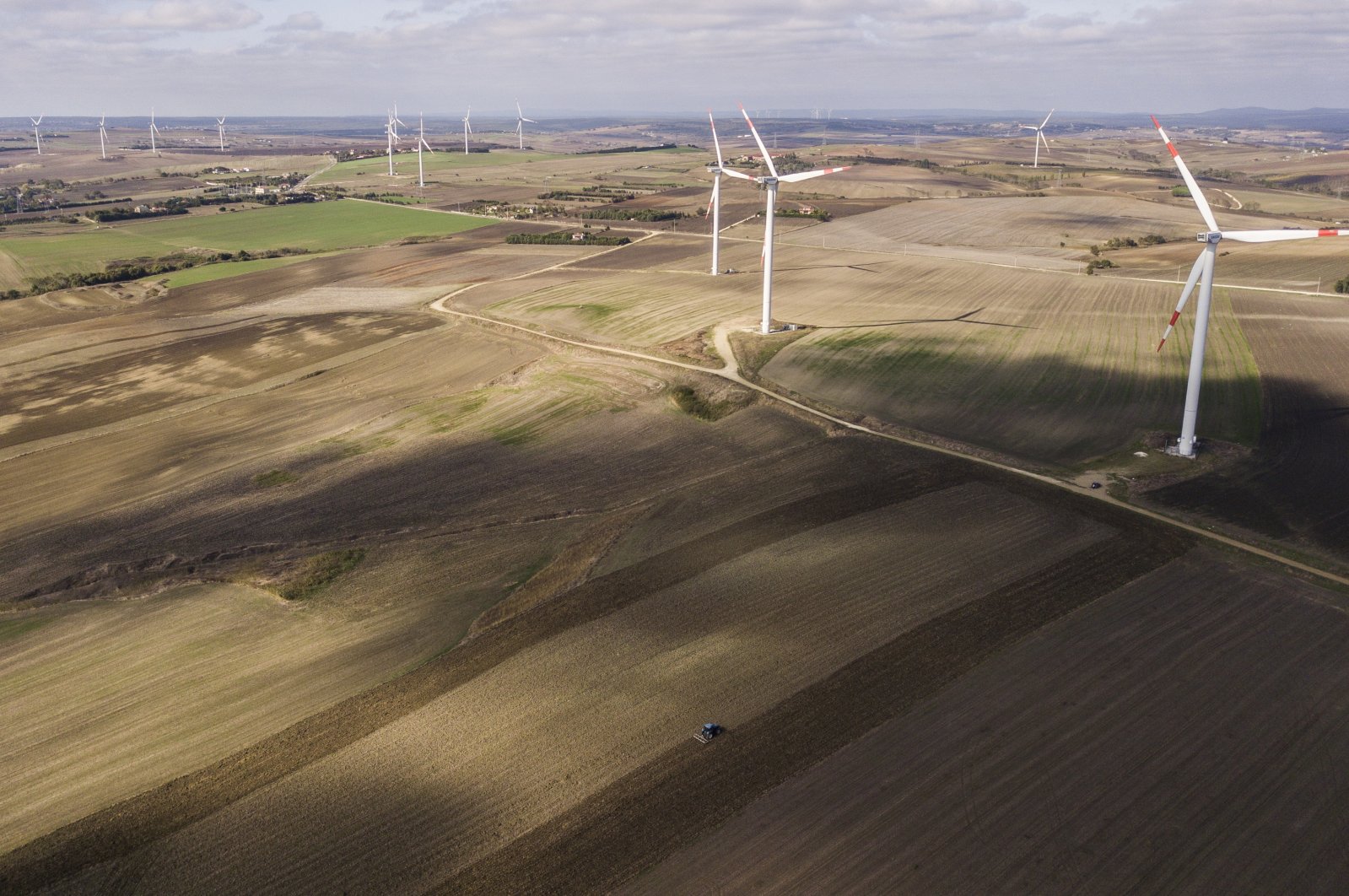 An aerial picture taken with a drone shows a Turkish farmer plows his farmland with a tractor in front of wind turbines at the country side of Istanbul, Turkey, Oct. 22, 2020. (EPA Photo)
by DAILY SABAH WITH AA Nov 02, 2020 1:51 pm
RECOMMENDED

A local industrial molding firm in western Turkey's Izmir plans to produce all the different parts of a wind turbine after it received TL 170 million ($ 20.2 million) in investments.

With the investment, it will establish a factory that is expected to create an added value of TL 329 million in five years by producing large turbine equipment. The facility will be built on a 145,000 square-meter area in the Organized Industrial Zone (OIZ) in Izmir's Kınık district.

Dirinler Döküm Board Chairperson Melih Dirin told Anadolu Agency (AA) that they have been operating in the field since 1974 and currently have an annual casting capacity of 204,000 tons.

"With the investment in the Kınık OIZ, we will build a facility to produce the bulk capacity of large products, used in the production of heavy industrial machinery. The program is aimed at increasing the wind energy power capacity and reducing Turkey's current account deficit," he said.

"We are planning a modern and technological casting production line, which works with all units in an area of approximately 100,000 square meters," he said, adding that in the coming period, a processing plant and assembly line will also be built.

Currently, the firm exports some 80% of its products to Northern Europe, Germany and neighboring countries, Dirin said, adding that 50% of the production consists of wind energy equipment currently manufactured at the facility in Izmir Atatürk Organized Industrial Zone (Izmir AOSB).

The new facility will produce larger parts required by wind turbines weighing 25 tons and above, he said. The factory will initially employ 100 to 150 people while the number is expected to reach 500 in the upcoming period, he added.

Dirin said currently certain wind turbine parts cannot be cast in the company's facilities due to building and equipment capacity. The Kınık OIZ investment will allow the company to produce those parts, making it a strategic investment.

"The equipment to which the wind turbine blades are connected to weighs around 25 tons, for turbines 3-megawatt (MW) and above," he said. "These types of parts have a simulation and pre-planning period that take one to two years."

"We have already completed our preliminary studies for the production of these parts with our current structure and research and development (R&D) center," Dirin said.

He added that the schedule for the construction of the factory depends on the developments of the coronavirus pandemic, but once the foundation has been laid, construction will be complete within two years.

Kınık Mayor Sadık Doğruer told AA that Dirinler Döküm will manufacture value-added parts in the region, enabling northern Izmir to be a production base for wind turbines with both Kınık OIZ and factories in the Çiğli district.

The district's location is also important as it has a highway connection to Istanbul as well as port connections, he added.

Kınık OIZ Chairperson Ufuk Akgün, highlighting the strategic importance of the region, said there are currently turbine wing and tower manufacturers in the Tepeköy neighborhood and Bergama district of Izmir. He added that the generator and tower productions are almost entirely carried out in the region too.

"With Aliağa and Izmir ports, along with other port construction that may occur, the north of the Izmir is becoming the wind energy production center of the country," said Akgün.