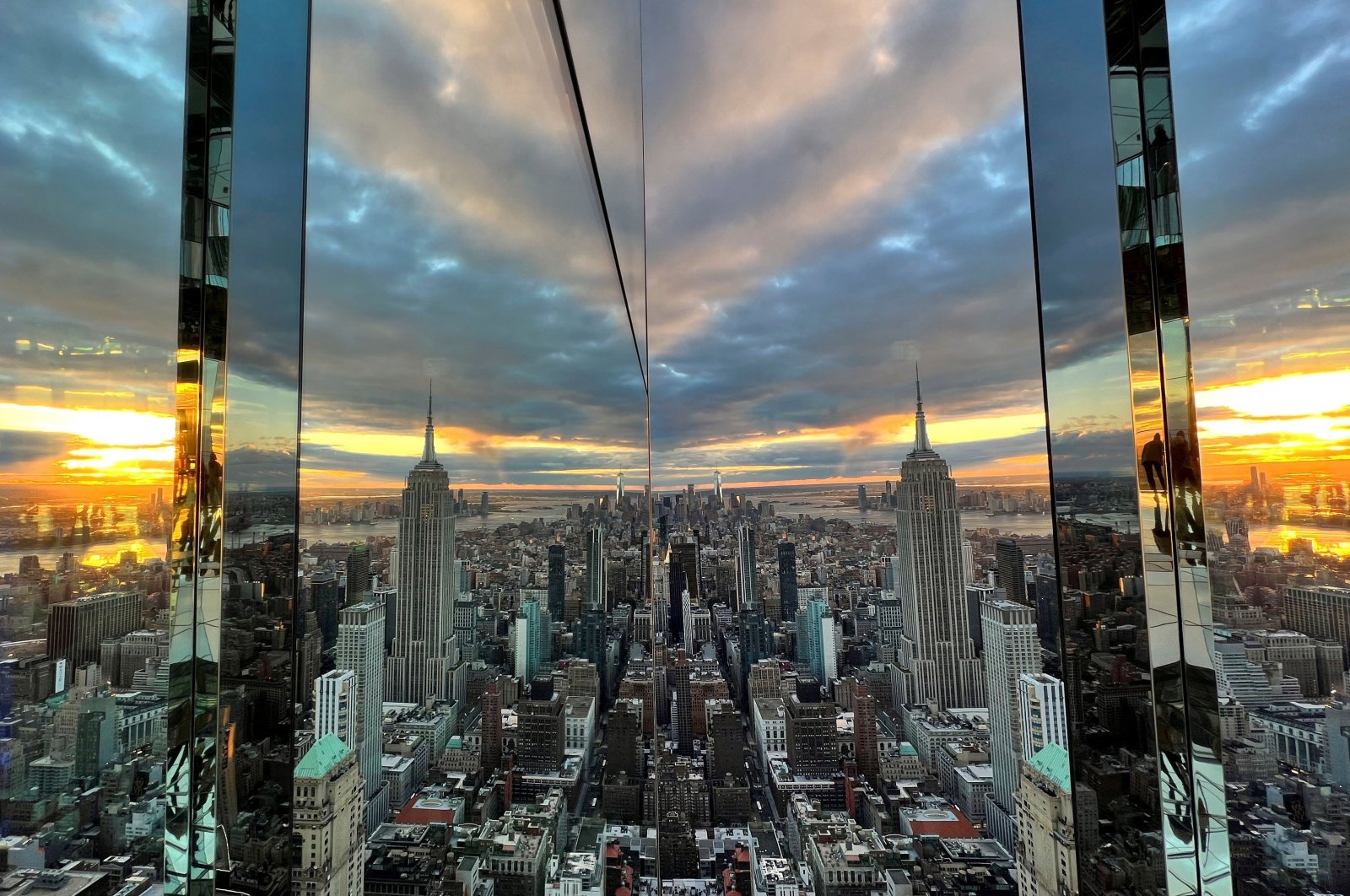 The Empire State Building and New York’s skyline are seen during the preview of SUMMIT One Vanderbilt observation deck, which is spread across the top four floors of the new One Vanderbilt tower in Midtown Manhattan, New York, U.S., Oct. 18, 2021. (Reuters Photo)
by Daily Sabah with Agencies Dec 15, 2021 10:35 am
RECOMMENDED

New York City lawmakers are expected to vote Wednesday on a bill banning natural gas hookups for new buildings in order to make the city a showcase for a climate change fighting policy that has been both embraced and blocked around the country, following in the footsteps of dozens of other smaller United States cities seeking to shift from fossil fuels to cleaner forms of energy.

Should the law pass, new buildings in the city of 8.8 million residents – the biggest in the U.S. – will have to use electricity for heat and cooking.

The measure is expected to pass the City Council and subsequently receive Mayor Bill de Blasio's signature. If all that happens, most construction projects submitted for approval after 2027 would have to use something other than gas or oil – such as electricity – for heating, hot water and cooking. Some smaller buildings would have to comply as early as 2024, while hospitals, commercial kitchens and some other facilities would be exempt.

Supporters see the proposal as a big and necessary move in a city where heating, cooling and powering buildings accounts for nearly 70% of emissions of carbon dioxide and other heat-trapping gases.

Although stoves and furnaces would use electricity generated partly from burning natural gas and other fossil fuels, backers say the change would boost momentum ahead of a statewide requirement to use 70% renewable energy by 2030, up from about 30% now.

"We can’t keep expanding gas if we have any prayer of hitting the state’s climate goals,” said Alex Beauchamp of Food & Water Watch, an environmental group.

"This is a huge, huge step forward," he said, calling the legislation "a real game-changer on the national scene."

Proponents also say they're fighting air pollution, particularly on behalf of communities of color. Researchers have found that non-white people are exposed to more air pollution than whites across the country.

"We must take steps towards climate justice – which is inextricably tied to racial justice,” and the gas legislation "provides an actionable and meaningful answer,” Council sponsor Alicka Ampry-Samuel tweeted in September. The Democrat represents an overwhelmingly Black Brooklyn district.

A few dozen other cities, including San Francisco and Seattle, have moved to end gas hookups for heat, hot water and sometimes cooking in at least some new buildings.

At the same time, states including Arizona, Oklahoma and Texas have barred cities from doing so, saying that consumers should have their choice of energy sources. In Texas, the effort began before, but gained all the more steam after, a February storm spawned massive power outages that left many households shivering without electricity, heat or drinkable water for days.

In New York, shifts toward electric vehicles, furnaces and appliances are "expected to create long-term upward pressure” on electricity use, according to the New York Independent System Operator, which oversees the state’s electricity supply.

The organization said in a recent report that it's still studying how those trends will affect the power system, but it forecasts that electricity demand could start peaking in winter, instead of summer, by about 2040.

The state envisions big increases in wind and solar power, among other approaches to meet its renewable energy targets and growing demand. Some projects are in the works.

Still, some building interests, including a big landlords' lobbying group called the Real Estate Board of New York, raised concerns at a City Council hearing last month about whether banning new natural gas hookups would strain the electrical grid. It already struggles during heat waves in the city, sometimes resulting in sizeable neighborhood outages.

Real estate groups also pressed to push back the deadlines for nixing gas, saying that alternative technologies – such as electric heat pumps that transfer heat between indoors and outdoors – need more time to develop, particularly for skyscrapers.

"We have real concerns that, as envisioned, these (proposals) may result in increased energy costs for customers,” said Bryan Grimaldi, a vice president of National Grid, which provides power in some parts of the city. Con Edison, which serves much of it, called for making provisions to help poorer renters with what it characterized as increased costs of electric heating.

Environmental groups say electric doesn't necessarily mean more expensive. In fact, they say it's just the opposite in some new, energy-efficient buildings. They also note that natural gas prices fluctuate, having risen notably this year before recently dropping somewhat.