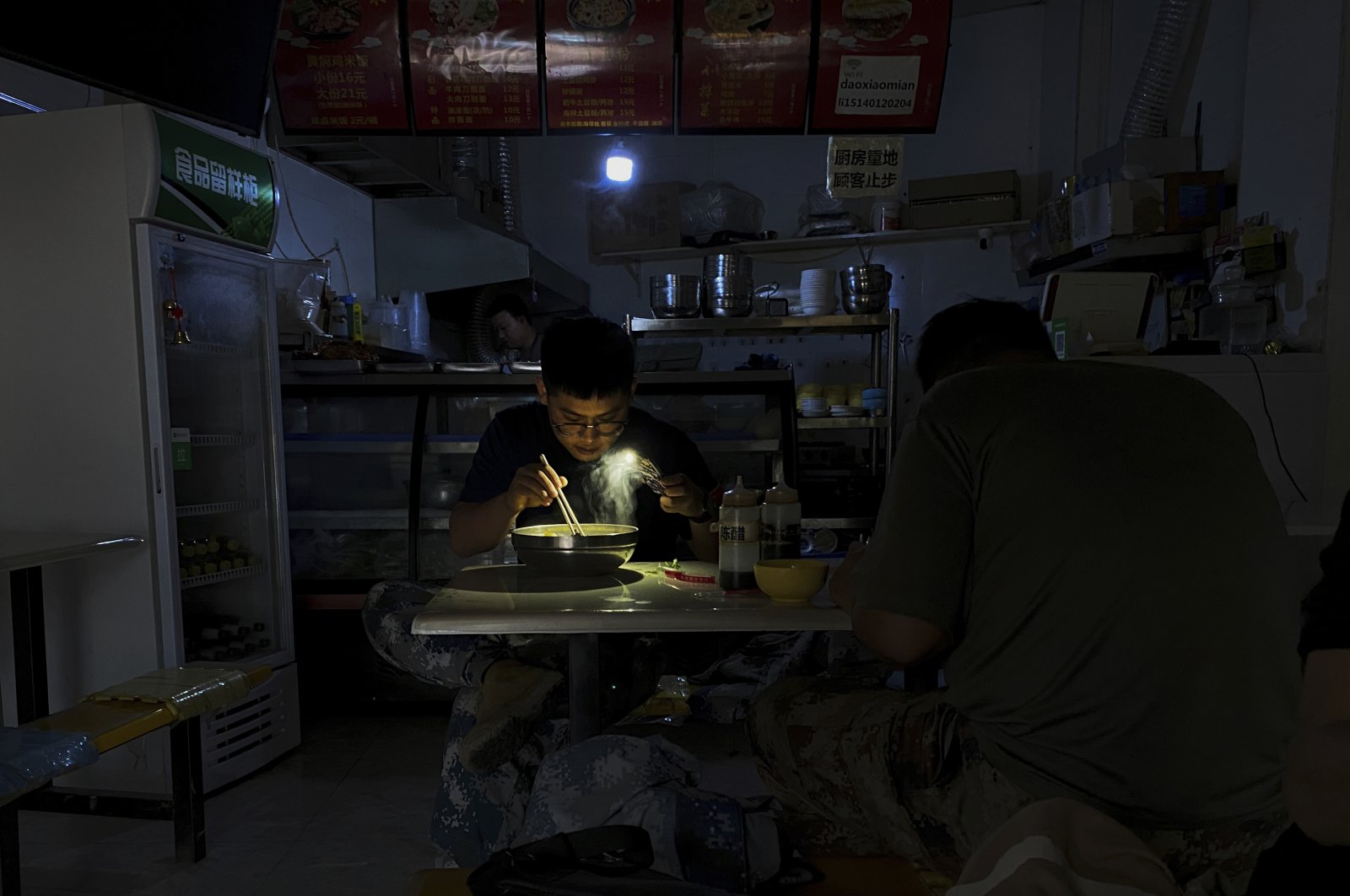 A man uses his smartphone flashlight to light up his bowl of noodles as he eats his breakfast at a restaurant during a blackout in Shenyang in the northeastern Liaoning Province, China, Sept. 29, 2021. (AP Photo)
by German Press Agency - DPA
Oct 03, 2021 9:05 pm

China has been facing an unprecedented energy crisis recently with no sure end in sight. Schools have also been suffering as some like the Baita Elementary School were without electricity. The screen at the front gate usually displaying announcements had gone dark too. Children were playing sports outside instead of learning.

"We’ve never had power cuts like this in Shenyang,” said one mother, wearing a long flowery skirt and permed hair. She declined to give her name. Blackouts for an hour or two were annoying, if tolerable, but now entire neighborhoods in her city were losing electricity for daylong stretches.

The woman was most worried about her elderly parents living in an apartment building 33 floors high. When the electricity went out, so did the water. She imagined them huddled in the dark, the elevators broken, their phones dead. She said people shouldn’t "have to live like this in modern times. At least the government should warn us before it happens.”

China’s nationwide power crunch has caused drastic electricity cuts. Factories across the country have shifted to reduced schedules or been asked to halt operations, slowing a supply chain already strained by shipping blockages because of coronavirus outbreaks. The crisis had been building through the summer but caught public attention last week when China’s north-eastern provinces made sudden electricity cuts to residential areas.

The shortages come at a time when China’s leaders are facing complaints from a widening middle class worried about housing, education and prospects for the future. Those worries were underscored in recent weeks by news that one of the country’s largest property developers, Evergrande, was $300 billion in debt and facing potential collapse. Analysts say such troubles are signs of deep-set problems in China’s slowing economy.

In Shenyang, the capital of Liaoning province, hundreds of cars were stuck on darkened highways for hours last weekend as traffic lights suddenly went out. On Sept. 24, 23 people in Liaoyang, an hour south of Shenyang, were hospitalized with gas poisoning after power cuts at a steel-casting company.

Chinese social media filled with complaints from other north-eastern residents of being stuck in elevators, losing water and a case of carbon monoxide poisoning when exhaust systems lost power in the middle of the night. In a manufacturing area a few miles from Baita Elementary School, all the factories appeared closed this week except for one called Jinbei, which makes car parts. The low roar of a generator buzzed and hummed in the air.

A worker outside the factory who declined to give his name said the plant had lost power earlier in the week, but the managers had brought in this generator two days before. Most of the other businesses on the street had told workers to go home early for the October holiday. The factory was determined to finish its orders. "As long as Benz is still making cars, we’ll keep making parts,” he said.

Coal prices have skyrocketed as the nation struggles to meet rising demands as it spends on heavy industry, real estate and infrastructure construction to spur economic growth and recovery from COVID-19. A rebound from the coronavirus in the United States and Europe has led to more demands for energy as China’s manufacturing industry moves to meet increased orders. Meanwhile, droughts in south-western China reduced hydropower production, leading to more reliance on coal.

"What happened was a repeat of what has happened every time there is a negative economic shock in China,” said Lauri Myllyvirta, lead analyst at the Center for Research on Energy and Clean Air. "The government uses real estate construction and infrastructure construction as a way to stimulate the economy. That’s what led to this.”

Many mines were shut down this summer after several deadly accidents in the lead-up to the Communist Party’s 100th anniversary. China has also been closing inefficient or overcapacity coal mines in an effort to improve energy efficiency. Stockpiles were further reduced when China stopped importing coal from Australia in retaliation for Australia calling for an investigation into the origins of the coronavirus that causes COVID-19.

Environmental concerns have also played a role. Political pressures to have smog-free skies for China’s national games, a sports event hosted in Shaanxi province in late September, probably added to coal mining reductions. Calls for blue skies are now shifting to the provinces around Beijing in preparation for the 2022 Winter Olympics.

Despite pledges that China’s carbon emissions will peak by 2030 and that it will be carbon neutral by 2060, the country is still the world’s biggest coal consumer and has continued to increase coal consumption in pursuit of economic growth. More than 50% of its energy production relies on coal.

The problem is compounded by a structural problem in China’s energy sector: Power plants buy coal at market price, but are not allowed to raise electricity rates on customers beyond small margins set by national planners. When coal is expensive, many plants report "maintenance outages” and reduce or stop operation rather than suffer losses.

"No one will generate power to lose more money because they know they’re not only burning coal, but also burning money,” said Li Shuo, senior global policy adviser at Greenpeace East Asia. That disconnect between market-based coal prices and regulated power prices is a symptom of China’s outdated power sector, he said.

"The challenge in our power system is we are trying to integrate more technologies that belong to the 21st century,” Li said. "But the political economy, the way that we run our power system, still belongs to the 1990s. It is very much command and control.”

"It’s a big disaster. It just shows that they are unprepared,” said Yan Qin, lead analyst at Refinitiv. Beyond the price regulation problem, provincial governments also failed to plan for supply security, even as the central government is moving to close inefficient mines and reduce carbon emissions, she said.

That failure to react stems from provincial governments prioritizing gross domestic product (GDP) growth as a measure of their performance. For decades, China’s overall economic model has relied on construction and heavy industry to drive growth, with local officials rewarded for high production numbers.

That strategy may be changing. China’s top economic planner, the National Development and Reform Commission, has set targets for reducing energy consumption while increasing efficiency. Many provincial governments have yet to meet those targets but are under increased pressure to take corrective measures.

Analysts say in the future – despite the coming winter when coal mining and coal imports will increase to meet energy demands – the crisis should reduce China’s dependence on fossil fuels and lead to investment in renewable energy to avoid high fuel prices.

China’s power system is structured around coal plants with the expectation that they can operate 24/7 and provide stability, he said.

"But what I’m seeing in front of me just debunked that narrative. Coal is not entirely safe and secure.”