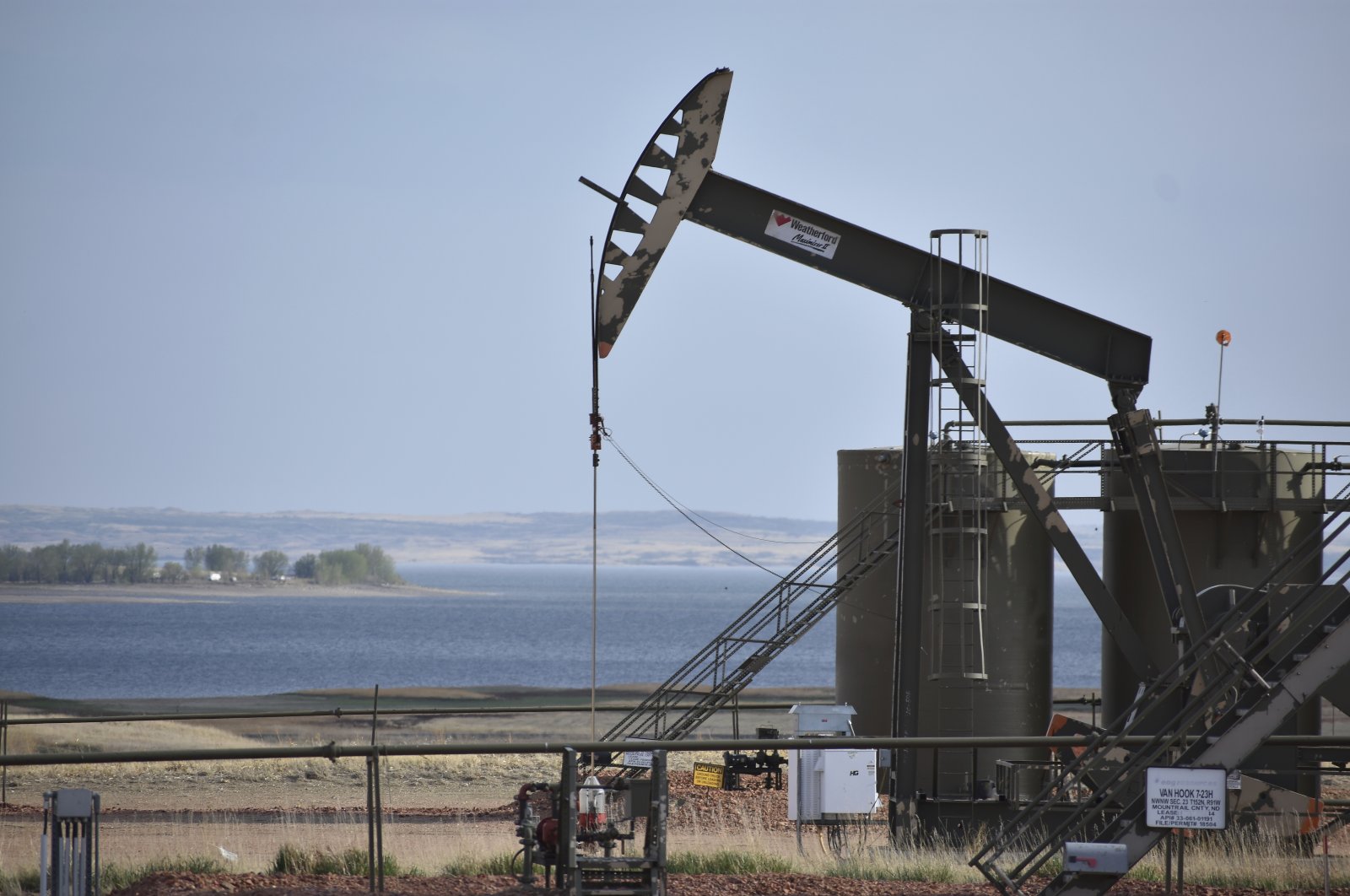 A pump jack extracts oil from beneath the ground on the Fort Berthold Indian Reservation, with Lake Sakakawea in the background, east of New Town, North Dakota, U.S., May 19, 2021. (AP Photo)
by French Press Agency - AFP Jul 13, 2021 12:22 pm
RECOMMENDED

A meeting of Organization of the Petroleum Exporting Countries (OPEC) and its allies, known as OPEC+, earlier this month was deadlocked over plans to gradually ease production cuts, imposed to reverse the plunge in oil prices at the start of the coronavirus pandemic as demand tumbled.

But demand is rebounding, with the IEA estimating it surged by an estimated 3.2 million barrels per day (mbd) last month, which is more than a third of the overall drop in demand last year.

The IEA expects oil demand to rise by another 3.3 mbd in the three months from July. That is more than twice as large as the seasonal increase registered during the same period in 2019, which the agency said is a result of easing COVID-19 restrictions and increasing vaccination.

While OPEC+ had been set to gradually raise oil output, the stalemate means production is frozen at current levels until an agreement is found.

"Oil prices reacted sharply to the OPEC+ impasse last week, eyeing the prospect of a deepening supply deficit if a deal cannot be reached," the IEA said in its latest monthly report.

The main international oil contracts have been trading around $75 per barrel, and some analysts see a spike to $100 as possible.

But there is another possibility: the overall OPEC+ deal breaks down and producers open the taps and try to gain market shares, which would likely lead to prices crashing.

"At the same time, the possibility of a market share battle, even if remote, is hanging over markets, as is the potential for high fuel prices to stoke inflation and damage a fragile economic recovery," said the IEA.

Investors have been worried that a surge in inflation could force central banks to raise their ultra-low interest rates, thus removing one of the main supports for the economic recovery.

The IEA said that absent increased production by OPEC+ nations the market for crude is set to tighten, with additional stocks built up during the pandemic already gone and reserves running below the long-term average in industrialized nations.

Furthermore, it forecasts the biggest draw upon stocks in at least a decade will happen this quarter as OPEC+ pumps nearly 2 mbd less than market demand. The gap will rise to 3.2 mbd in the final three months of the year.

"Oil markets are likely to remain volatile until there is clarity on OPEC+ production policy," the IEA warned.

It also noted that a spike in prices would not be in the long-term interest of oil producers.

"While prices at these levels could increase the pace of electrification of the transport sector and help accelerate energy transitions, they could also put a drag on the economic recovery, particularly in emerging and developing countries," the IEA report said.

While the agency, which advises oil-consuming nations, foresees oil demand recovering along with the global economy, it doesn't discount the pandemic continuing to weigh upon the market.

"Covid-19 remains a significant threat to oil demand growth in the near- to medium-term, in particular in the non-OECD."

Emerging nations not in the OECD group of advanced nations – such as China and India – were responsible for much of the growth in the global economy before the pandemic.