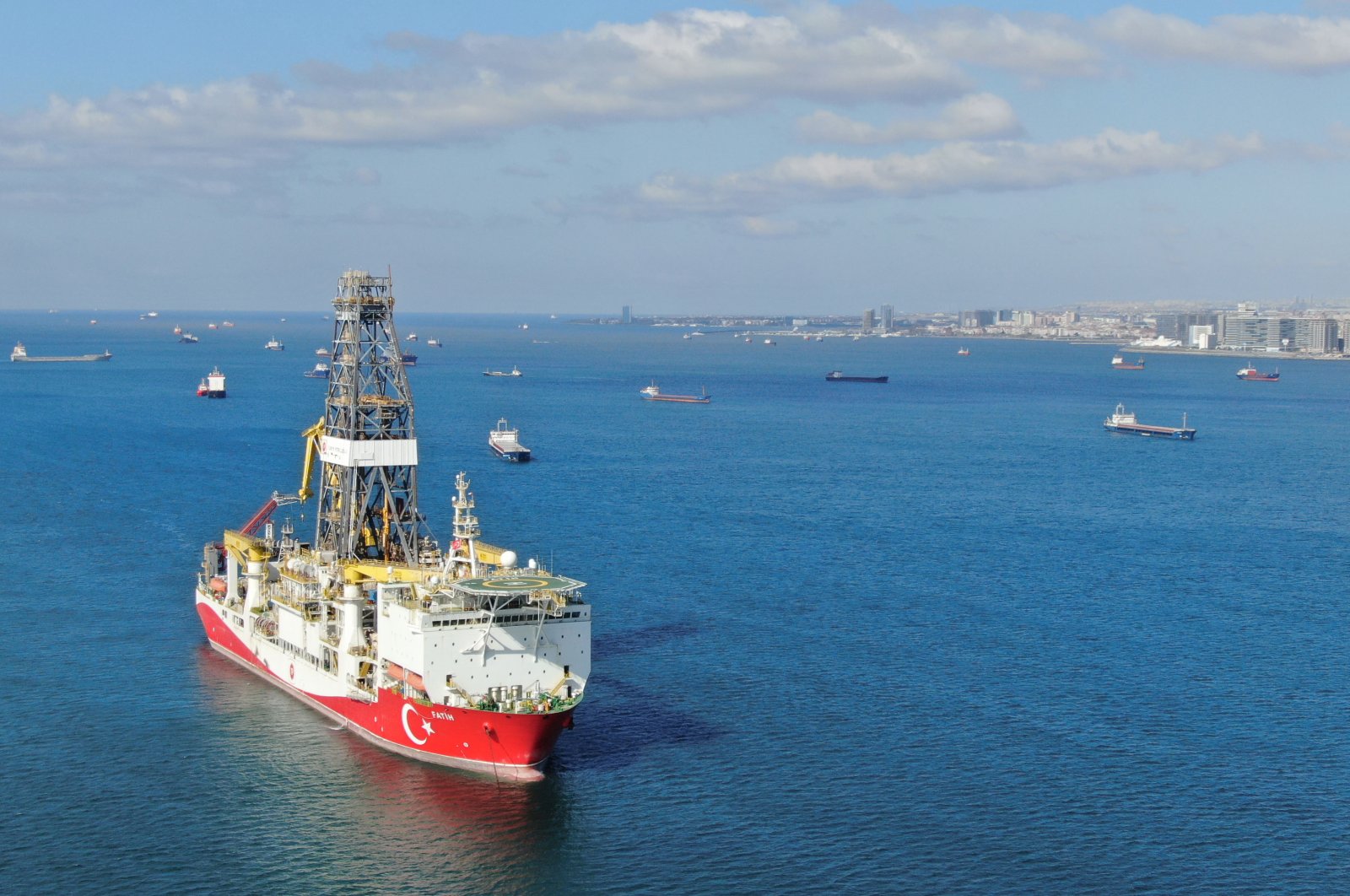 The Turkish drilling vessel Fatih is seen off the shores of Istanbul's Yenikapı during the coronavirus pandemic, Turkey, April 9, 2020. (DHA Photo)
by DAILY SABAH WITH AA May 04, 2020 12:12 pm

Turkey has intensified hydrocarbon exploration and drilling activities in the Eastern Mediterranean despite the ongoing COVID-19 pandemic, which along with causing low oil prices has resulted in a temporary suspension of activities by foreign oil companies in the region.

The country is conducting exploration activities in the Eastern Mediterranean with two drilling vessels – the Fatih and the Yavuz – along with the Oruç Reis and the Barbaros Hayrettin Paşa seismic ships.

The third drillship, the Kanuni, also arrived in Taşucu, a coastal city along the Mediterranean Sea in the province of Mersin, on March 15.

The effect of the virus has caused a sudden global economic downturn and a corresponding fall in global oil prices. This collapse deepened further due to the onset of an oil price war between the world's two biggest oil producers, Saudi Arabia and Russia, following the Organization of the Petroleum Exporting Countries (OPEC) and non-OPEC countries' failure to reach an agreement in March to curb production.

The impact of COVID-19, coupled with low oil prices, has affected exploration and drilling activities on the part of global oil companies and resulted in revisions or temporary suspensions to these programs, including those in the Eastern Mediterranean.

ExxonMobil shelved its plans to drill off the coast of Cyprus as of April 13 in response to the outbreak and the subsequent chaos it sent rippling through international markets.

Likewise, international media outlets reported that the drilling programs of French-Italian consortium, Total and ENI, were also postponed on the three wells planned for 2020 and six wells planned for the following two years.

On March 25, Italy's ENI announced the revision of its 2020-2021 plans. The revised projects include mainly upstream activities, particularly production optimization and new project developments scheduled to start in the short term.

Mehmet Efe Biresselioğlu, head of the Sustainable Energy Division at the İzmir University of Economics, said the exploration ships and naval vessels would leave the Eastern Mediterranean after the COVID-19 outbreak had subsided.

"The collapse in oil prices has resulted in an appetite loss for international actors in the region," he told Anadolu Agency (AA).

"We can say that countries that adopted an inward-looking policy due to COVID-19 have given pause to their plans in the Eastern Mediterranean. However, this does not eliminate the possibility of a change in the situation as the virus diminishes," he noted.

Before the pandemic, many countries were developing revisionist policies toward key regions, including the Eastern Mediterranean and the Middle East, according to Biresselioğlu.

He stressed the impact of Turkey's active policy and increased presence in the region.

"Turkey has followed a similar path and developed appropriate policies through bilateral cooperation, achieving important gains in this region. If Turkey can get through this crisis with the least possible shortfalls, its advantageous position could be strengthened even more," he said.

Turkey and Libya's U.N.-recognized Government of National Accord (GNA) signed two separate pacts on Nov. 27 last year; one ensuring military cooperation and the other on shared maritime boundaries of the countries in the Eastern Mediterranean.

The maritime pact asserted Turkey's rights in the Eastern Mediterranean in the face of unilateral drilling by the Greek Cypriot administration, clarifying that the Turkish Republic of Northern Cyprus also had rights to the resources in the area. The pact took effect on Dec. 8.

"This pact has been a game-changer, and we will continue to see further positive results of this agreement. I believe this pact will contribute to a possible diplomatic solution and adoption of a win-win principle," Biresselioğlu said.

He added that the third drillship, the Kanuni, which entered Turkish waters in mid-March, would be ready to start operations following a relaxation on measures against the COVID-19 pandemic.

Last May, Turkish-flagged drillships began offshore drilling operations in areas off the coast of Cyprus. The areas fall entirely within the Turkish continental shelf registered with the U.N. and in permit licenses that the Turkish government in previous years had granted to Turkish Petroleum, the country's national oil company.

Turkey has stressed it wants to see energy as an incentive for political resolution on the island and peace in the wider Mediterranean basin, not a catalyst for further tensions.

'International companies can work with Turkey'

Many oil companies currently do not have the budget for "risky ventures," Akyener said but noted that the situation for Turkey was different. "Turkey continues its exploration activities in the Eastern Mediterranean with the support of public finance in its maritime zone.”

He suggested that international companies could work with Turkey, describing it as a “most advantageous country in the region, both financially and logistically.”

At the end of February, Lebanon officially announced the start of the country's first oil and gas exploration operations in its Exclusive Economic Zone.

The results of the drilling, located nearly 30 kilometers (18.64 miles) off the coast of Beirut, were projected to be reported in June 2020. However, the Minister of Energy and Water, Raymond Ghajar, recently announced that no commercially viable amount of gas was found in Block 4. But he added that there is a possibility for a larger find in Lebanon's waters because several small pockets of gas were uncovered during the drilling.

In January 2018, two exploration and production agreements for Blocks 4 and 9 were signed between Lebanon and the consortium exploration team comprised of Total, ENI and Novatek.

Akyener said any new discovery by Lebanon could bring about new equilibrium in the region, adding that currently, all eyes are on Lebanon's offshore drilling operations.

"Therefore we need to use our advantages in the Eastern Mediterranean and build our future here accordingly," he concluded.