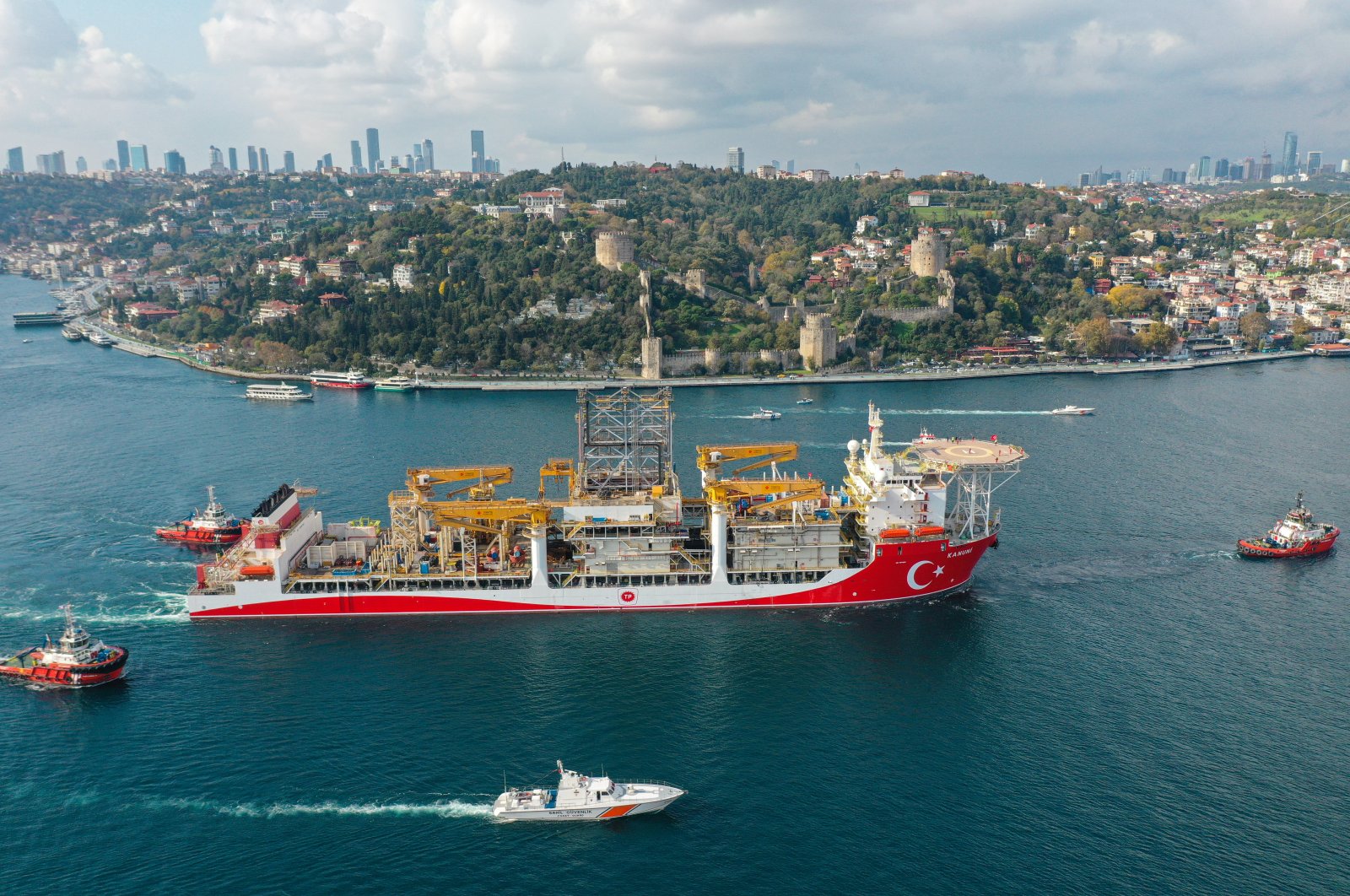 Turkey's third drillship Kanuni is seen off Istanbul as it departs for the Black Sea to carry out drilling activities, Nov. 13, 2020. (AA Photo)
by DAILY SABAH Feb 09, 2021 3:53 pm
RECOMMENDED

Turkey is close to adding a fourth vessel to expand its drilling fleet and speed up activities in the Mediterranean and the Black Sea.

The Turkish Petroleum Corporation (TPAO) is said to be very close to reaching an agreement for a deep-water drilling vessel that would arrive from Norway, reports said Tuesday.

It is said to be purchased from the Norwegian rig company Dolphin Drilling, according to Norwegian newspaper Finansavisen.

Delivered from South Korea’s Hyundai Heavy Industries in 2014, the drilling vessel was considered the crown jewel of the rig company, which was previously listed under the name Fred. Olsen Energy.

The price being negotiated has not been disclosed. VesselsValue is said to value the drilling vessel at $95 million (TL 673.49 million).

The figure is well below the price the company announced in November 2018 when it said it was in negotiations for the sale of the vessel for $340 million, according to the report.

The deal is said to be a part of the restructuring of the Dolphin Drilling, which started in the summer of 2019.

It is said that the vessel is being sold to cover some of the billions in debt to secured creditors Danske Bank, DNB, SEB, Swedbank and Strategic Value Partners (SVP).

“One of our vessels is in the Mediterranean. We have two ships in the Black Sea. We have said we may go in the direction of buying or leasing a third ship. Our friends are working (on the subject). We will prefer what is more economic for us,” Dönmez had said.

The third drillship, Kanuni, which joined the fleet last year, is set to join Fatih soon. It departed Istanbul in November en route to the Black Sea for maintenance at the Port of Filyos on the sea's coast before starting its mission.

Fatih last year made the country’s largest-ever gas discovery after it found 405 billion cubic meters (bcm) of natural gas at the Tuna-1 location in the Sakarya gas field, located about 100 nautical miles north of the Turkish Black Sea coast.

TPAO is now considering partnership and gathering funds to carry out work on the Black Sea gas, a Bloomberg report said Monday.

The country’s state-owned oil and gas company is said to have made preliminary contact with several international oil companies, including some of the majors, to jointly produce gas.

Sources said the capital investment needed to produce the gas from the offshore field and deliver it onshore is estimated to be around $3.2 billion.

The amount allocated to the TPAO from the government’s 2021 budget is around TL 13.4 billion ($1.9 billion), though it is not clear how much of this amount was for the gas project.

Engineering studies are currently ongoing to bring the gas ashore at the Filyos port in northern Turkey’s Zonguldak province after production starts, and Turkey is determined to connect the gas to the country’s transmission system by 2023.

Turkey envisages an annual gas flow of 5-10 bcm. The field is expected to reach a production plateau of around 15 bcm as of 2025.

The fourth vessel is said to arrive in Turkey after completing the necessary procedures, the Turkish Sabah daily suggested.

Dubbed a “legendary vessel” among deep sea drillships, the 229-meter ship is said to equipped with advanced technology and is said to be capable of drilling to a maximum depth of 12,000 meters.