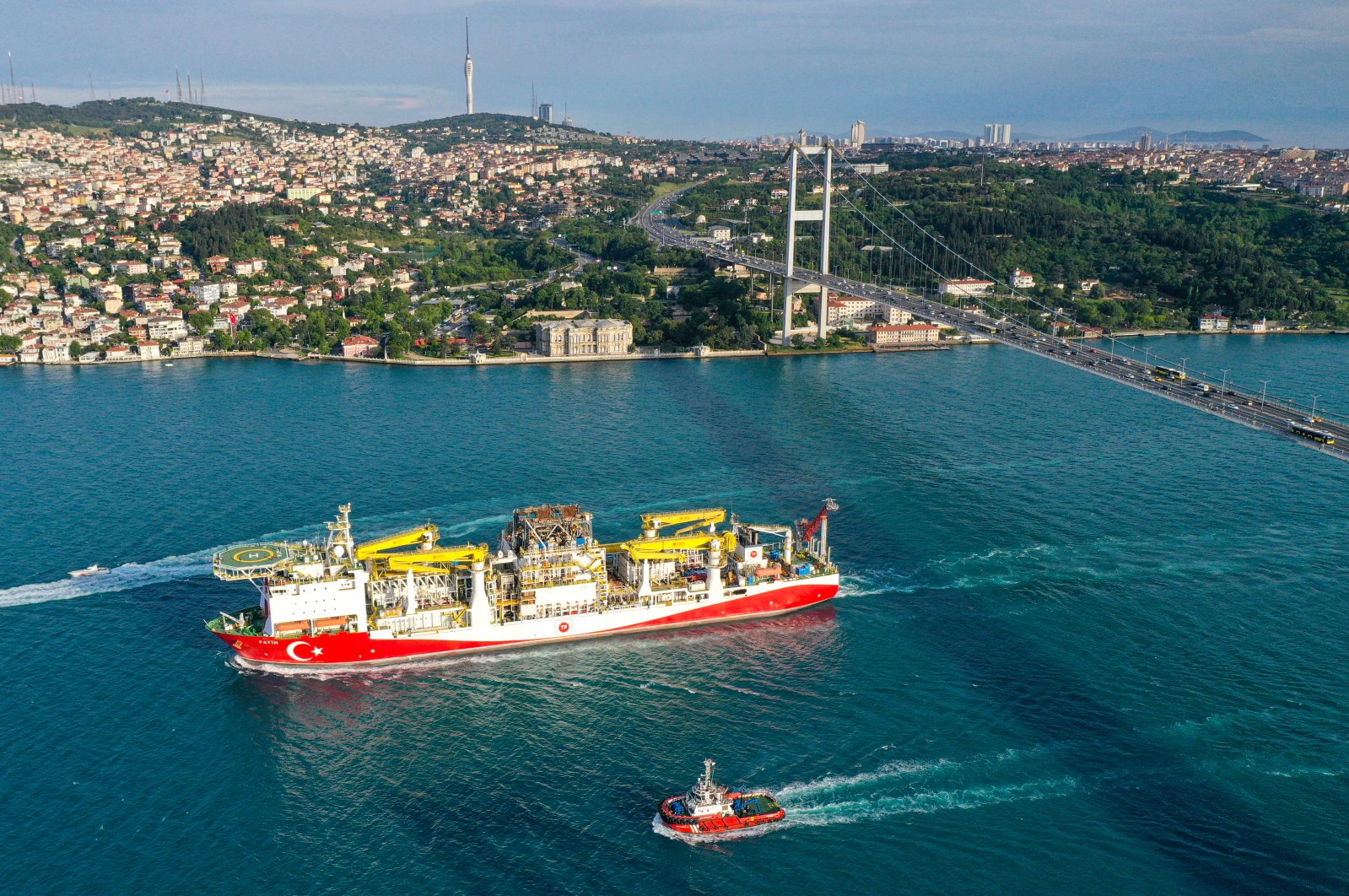 Turkey's first drilling vessel Fatih sails under July 15 Martyrs Bridge, formerly known as the Bosporus Bridge, as it leaves for the Black Sea, Istanbul, Turkey, May 29, 2020. (AA Photo)
by Daily Sabah with Wires May 29, 2020 5:44 pm
RECOMMENDED

Turkey may begin oil exploration in Eastern Mediterranean within 3-4 months as part of an agreement with the Libyan government, Energy and Natural Resources Minister Fatih Dönmez said Friday.

Speaking at a ceremony to mark the launch of Turkey's first drillship Fatih oil-and-gas drilling ship to the Black Sea, Dönmez said Turkish Petroleum (TPAO), which had applied for an exploration permit in the Eastern Mediterranean, would begin operations in areas under its license after the process was completed.

"Within the framework of the agreement we reached with Libya we will be able to start our oil exploration operations there within three to four months," the minister said.

The maritime pact asserted Turkey's rights in the Eastern Mediterranean in the face of unilateral drilling by the Greek Cypriot administration, clarifying that the Turkish Republic of Northern Cyprus (TRNC) also has rights to the resources in the area. It went into effect on Dec. 8.

Dönmez earlier this month said that TPAO has applied to Libya for an exploration permit in the Eastern Mediterranean, stressing that the exploration would begin as soon as the process is completed.

The minister said that Fatih's 103-meter long towers were disassembled in Haydarpaşa port to enable the vessel for safe passage under the bridges through the Bosphorus and is projected to reach Trabzon in northeastern Turkey on June 1 to be reassembled.

"After completing nearly 1.5 months preparation period, Fatih will start its first drilling in the Black Sea in the Tuna-1 location in mid-July," Dönmez said.

Turkey will continue to carry on offshore exploration studies which are vital for the country's energy independence, he added.

"Yavuz continues its operations in Selçuklu-1 location in the Mediterranean Sea, which marks the 7th deep drilling activity that is conducted in the area. Barbaros Hayrettin Paşa and Oruç Reis seismic vessels are also exploring our seas," he said.

In May 2019, Turkish-flagged drillships began offshore drilling operations in areas off the coast of Cyprus. The areas fall entirely within the Turkish continental shelf registered with the U.N. and in permit licenses that the Turkish government in previous years granted to Turkish Petroleum.

Turkey's third drillship, Kanuni, arrived in Taşucu, Mersin, a coastal city in the Mediterranean region of the country on March 15.

Following the completion of renewal and upgrade studies, Kanuni, which joined the fleet at the beginning of 2020, is also projected to start operations in the Mediterranean Sea this year, according to Dçnmez.

The country plans to conduct five drills in the Eastern Mediterranean this year, according to Turkey's Annual Presidential Program for 2020.

"Our two seismic and two drilling vessels will continue to work in the Eastern Mediterranean at full capacity. With Fatih's sail to the Black Sea, we now bridged the most important gap," the energy minister said.