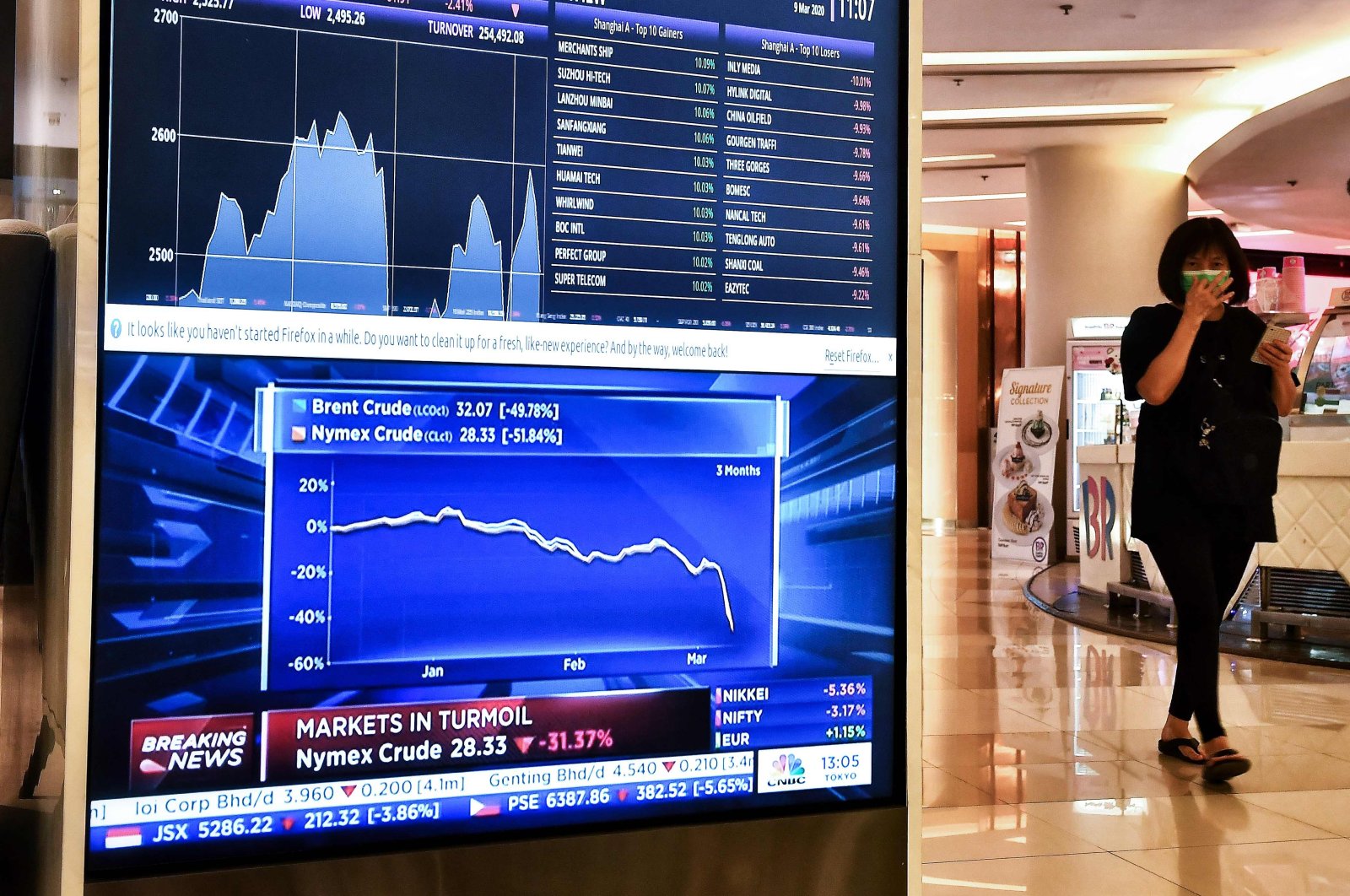 A woman wearing a face mask walks past an electronic board showing an overview of the Asian stock index and news report on the oil market at a shopping mall in Bangkok, March 9, 2020. (AFP Photo)
by Alen Lepan Mar 09, 2020 5:06 pm

Riyadh's oil price war against onetime ally Russia has shocked global markets, resulting in a historic collapse of oil prices, a crash that could cut Turkey's energy bill if it continues

Already grappling with risks from the spreading coronavirus, markets around the world found themselves opening Monday with yet another shock – Saudi Arabia firing the first shot of an oil price war. The move lead Brent crude to drop by almost a third at one point Monday, sinking the global stocks.

The tumble came after Riyadh stunned markets saying it would slash its official selling prices and step up its production significantly starting next month to win a share of the market, declaring a price war against Russia and the U.S.

The move was dubbed by some a retaliation after Moscow Friday balked at making a further steep output cut proposed by the Organization of the Petroleum Exporting Countries (OPEC) to stabilize the oil markets, which have been left with excess supply due to coronavirus.

Oil prices Monday lost as much as a third of their value in their biggest daily rout since the 1991 Gulf War. The price of Brent crude, the global benchmark, fell from about $50 to $45 on March 6. It crashed by another 30% to $31 a barrel Monday as markets re-opened.

Global stocks also plunged and a crash in oil prices sent investors already worried by the coronavirus fleeing for the safety of bonds and the yen.

European equity markets suffered hefty losses with London, Frankfurt and Paris tumbling between 7-8%. Italy's main index slumped 11% after the government ordered a lockdown of large parts of the north of the country, including the financial capital Milan.

The pan-regional STOXX 600 fell into the bear market territory – a drop of more than 20% from its February peak. Oil stocks sank, with Premier Oil down 51% and energy giant BP trading 21% lower.

Saudi Aramco shares fell by as much as 10%, extending a dive below the initial public offering price. Government bonds in Saudi Arabia and other Gulf oil-producing nations were also hit.

Shares in Aramco were at 27 riyals ($7.20) in early trade, 15.6% below its IPO price of 32 riyals, which in December valued the company at $1.7 trillion in the world’s biggest share offering.

The Russian ruble tumbled to four-year low and shares in Russian companies, including oil giant Rosneft, also plunged in London. The Moscow Stock Exchange was closed for a public holiday on Monday.

In a time when cooperation seemed more important than ever due to significant collapse in oil demand due to the coronavirus, not many had expected the Friday meeting to break up, particularly as Riyadh and Moscow had worked together since 2016 to control output and support oil prices.

The crash is now expected to hit the economies of Saudi Arabia and Russia as well as other oil producers and will impact the U.S.’ oil production.

Behind the scenes, one of the most important reasons why Moscow refused to approach the proposal of the Saudi-led OPEC to make additional cuts in oil production is said to be Russia’s concern of losing further clout in the global oil market to U.S. shale oil producers.

Some analysts said Russia may be betting that the lower prices could cause U.S. shale producers to slow output.

Having supported the OPEC’s additional oil cut decisions through cooperation with Saudi Arabia at the end of 2016 due to low oil prices, Russia had cut its output three times in the last four years. But with each output cut to boost oil prices, Saudi-led OPEC countries and Russia’s market share went to U.S. shale oil producers.

“The supply established by the U.S. shale producers has been disturbing both the Russians and the Saudis,” Şant Manukyan, İş Yatırım International Markets director, told Daily Sabah.

“Now we have started a process where some of these manufacturers will go bankrupt. Although OPEC has long ago lost its characteristic of being a cartel, we need to see how the Saudis’ decision will be met by other members,” Manukyan noted.

He said he attaches greater importance to the fact that oil-producing companies constitute around 20% of the high-yield market.

“Here, bankruptcies cannot be avoided. Since the drop will also bring down other financial assets, there will be problems in the global collateral and credit market,” Manukyan added.

He also remarked that in case companies, whose cash flows have already deteriorated due to the coronavirus, have problems with dollar funding, a problem of a size that cannot be solved by the central banks' interest rate cuts may emerge.

Elaborating on the issue, Ryan Fitzmaurice, commodities strategist at Rabobank, said U.S. shale producers were hoping to be thrown a lifeline from the OPEC+ talks, but instead many were left questioning their chances of survival in what’s sure to be a challenging environment for them going forward.

“U.S. shale producers were hoping to be thrown a lifeline from the OPEC+ talks, but instead many were left questioning their chances of survival in what’s sure to be a challenging environment for them going forward," Fitzmaurice said.

U.S. shale oil and gas drillers in the U.S. were under severe financial pressure even before the recent sell-off in oil prices, he noted. He also stressed that while oil and gas production in the U.S. has surged over the past decade, the market capitalization of the top producers has ironically plummeted over the same period.

“Share prices across the exploration and production sector currently sit at or near all-time lows as a result of high debt levels, lack of free cash flow generation and extremely poor investor sentiment with respect to the energy sector,” he added.

Fitzmaurice also remarked that “perhaps this is exactly what Russia had in mind when they chose to do the exact opposite of the Fed (U.S. Federal Reserve) this week and surprise the market with no cut.”

He said Russia “appears to be playing the ‘long-game’ and is willing to suffer through a period of low prices in order to deal a final blow to the U.S. shale industry and its relentless growth at all costs."

While oil prices had jumped to over $50 with output cuts by Riyadh and Moscow, the U.S. managed to capture an important part of their market share. A situation that eventually enabled it to surpass Saudi Arabia and Russia in November 2018 to become the world’s biggest crude oil producer.

Its refusal to support the OPEC’s output cut offer as it doesn’t want to lose its share to U.S. producers signals Russia could also step up its oil production.

The possibility of Saudi Arabia ramping up crude output starting at the beginning of April also introduces an end to the more than three-year Riyadh-Moscow alliance.

Saudi Arabia is planning to ramp up its crude output to above 10 million barrels per day (bpd) next month, two sources were cited by Reuters as saying on Sunday. This move will occur after the current deal to curb production expires at the end of March. The kingdom has been producing around 9.7 million bpd in recent months.

Riyadh over the weekend cut its official selling prices for April for all crude grades to all destinations by between $6 and $8 a barrel.

The International Energy Agency (IEA) said Monday oil demand was set to contract in 2020 for the first time since 2009. It cut its annual forecast by almost 1 million bpd, signaling a contraction of 90,000 bpd.

Major banks have cut their demand growth forecasts. Morgan Stanley predicted China would have zero demand growth in 2020, while Goldman Sachs sees a contraction of 150,000 bpd in global demand.

Goldman Sachs also cut its forecast for Brent to $30 for the second and third quarters of 2020.

The collapse is said to have battering consequences and could be particularly devastating for Gulf states, which account for a fifth of global crude supplies and where oil income makes up 70-90% of public revenues.

The crash in oil prices is said to take a toll on Saudi Arabia’s economy due to its reliance on oil.

The top oil exporter needs oil priced at $80-$85 a barrel to balance the budget, according to the International Monetary Fund (IMF).

On the other hand, Moscow needs oil at $42-$45 to maintain its budget balance.

In case prices remain low, both countries are estimated to have billions of dollars of a gap in their oil revenues and budgets.

Dependent on imports for almost all of its energy, Turkey has been tallying an annual energy bill hovering around $40 billion, which analysts expect to drop significantly if the current situation continues.

Its energy import bill in 2019 was down by 4.2% year-on-year and came in at $41.18 billion, according to Turkish Statistical Institute (TurkStat) data.

Kumbaroğlu suggested the low crude oil prices would have a positive effect on macroeconomic balances as well as significantly slash the cost of goods and services production.

“An average barrel price of Brent crude was $64.57 in 2019, and Turkey’s imports stood at 263 million barrels. Namely, we made a payment of roughly $17 billion for crude oil. If we calculate the barrel price in today’s terms, $35, we will pay $9 billion for the same amount. If the crude oil stays at today’s price level, we will be paying up to $8 billion less,” Kumbaroğlu told the Sabah newspaper.