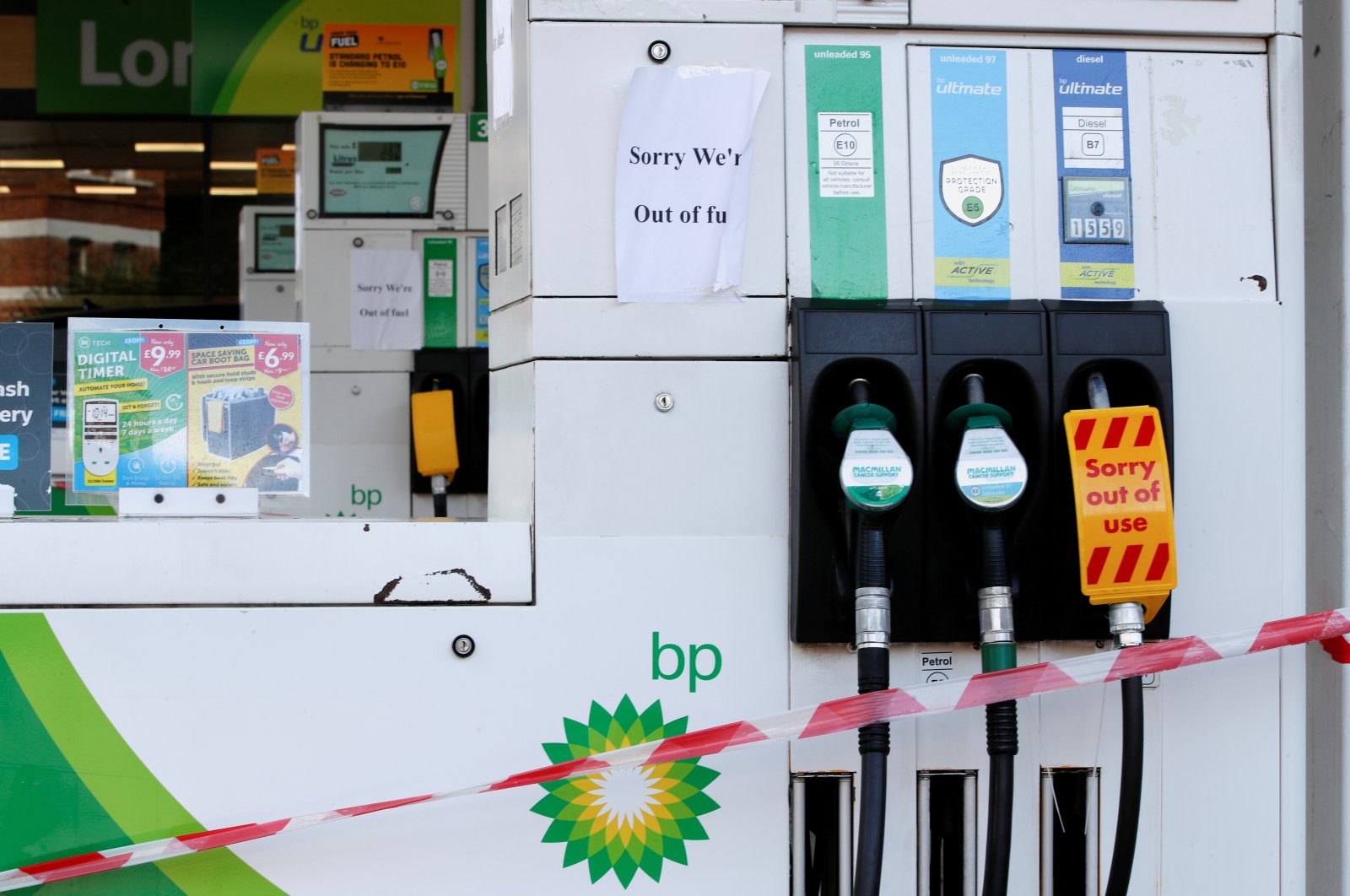 Up to 90% of British gas stations ran dry across major English cities on Monday after panic buying deepened a supply chain crisis triggered by a shortage of truckers that retailers are warning could batter the world’s fifth-largest economy.

A dire post-Brexit shortage of truck drivers emerging after the COVID-19 pandemic has sown chaos through British supply chains in everything from food to fuel, raising the specter of disruptions and price rises in the run-up to Christmas.

Just days after Prime Minister Boris Johnson's government spent millions of pounds to avert a food shortage due to a spike in prices for natural gas, the biggest cost in fertilizer production, ministers asked people to refrain from panic buying.

But lines of dozens of cars snaked back from gas stations across the country on Sunday, swallowing up supplies and forcing many stations to simply close. Pumps across British cities were either closed or had signs saying fuel was unavailable on Monday, Reuters reporters said.

The Petrol Retailers Association (PRA), which represents independent fuel retailers that now account for 65% of all U.K. stations, said members had reported that 50% to 90% of pumps were dry in some areas.

“We are unfortunately seeing panic buying of fuel in many areas of the country,” Gordon Balmer, executive director of the PRA, who worked for BP for 30 years, told Reuters.

“We need some calm,” Balmer said. “Please don’t panic buy: if people drain the network then it becomes a self-fulfilling prophecy.”

Britain is considering calling in the army to ensure fuel supplies reach consumers, according to The Times and Financial Times.

But haulers, gas stations and retailers warned that there were no quick fixes as the shortfall of truck drivers – estimated to be around 100,000 – was so acute and because transporting fuel demands additional training and licensing.

Britain’s retail industry warned the government on Friday that unless it moves to alleviate an acute shortage of truckers in the next 10 days significant disruption was inevitable in the run-up to Christmas.

For months, supermarkets, processors and farmers have warned that a shortage of heavy goods vehicle (HGV) drivers was straining supply chains to breaking point – making it harder to get goods onto shelves.

BP said on Sunday that nearly a third of its British gas stations had run out of the two main grades of fuel as panic buying forced the government to suspend competition laws and allow firms to work together to ease shortages.

"With the intense demand seen over the past two days, we estimate that around 30% of sites in this network do not currently have either of the main grades of fuel," BP, which operates 1,200 sites in Britain, said in a statement.

"We are working to resupply as rapidly as possible."

“This step will allow government to work constructively with fuel producers, suppliers, haulers and retailers to ensure that disruption is minimized as far as possible,” the business department said in a statement.

Transport minister Grant Shapps had earlier appealed for calm, saying the shortages were purely caused by panic buying, and that the situation would eventually resolve itself because fuel could not be stockpiled.

"There's plenty of fuel, there's no shortage of the fuel within the country," Shapps told Sky News.

After meeting Kwarteng, industry figures including representatives from Shell and Exxon Mobil said in a joint statement issued by the business department that they had been reassured, and stressed there was no national fuel shortage.

Earlier, Shapps said the shortage of truck drivers was down to COVID-19 disrupting the qualification process, preventing new labor from entering the market.

Others pinned the blame on Brexit and poor working conditions forcing out foreign drivers.

The government on Sunday announced a plan to issue temporary visas for 5,000 foreign truck drivers.

But business leaders have warned the government's plan is a short-term fix and will not solve an acute labor shortage that risks major disruption beyond fuel deliveries, including for retailers in the run-up to Christmas.

Shapps called the panic over fuel a "manufactured situation" and blamed it on a haulers’ association.

"They're desperate to have more European drivers undercutting British salaries," he said.

An Opinium poll published in the Observer newspaper on Sunday said that 67% of voters believe the government has handled the crisis badly. A majority of 68% said that Brexit was partly to blame.