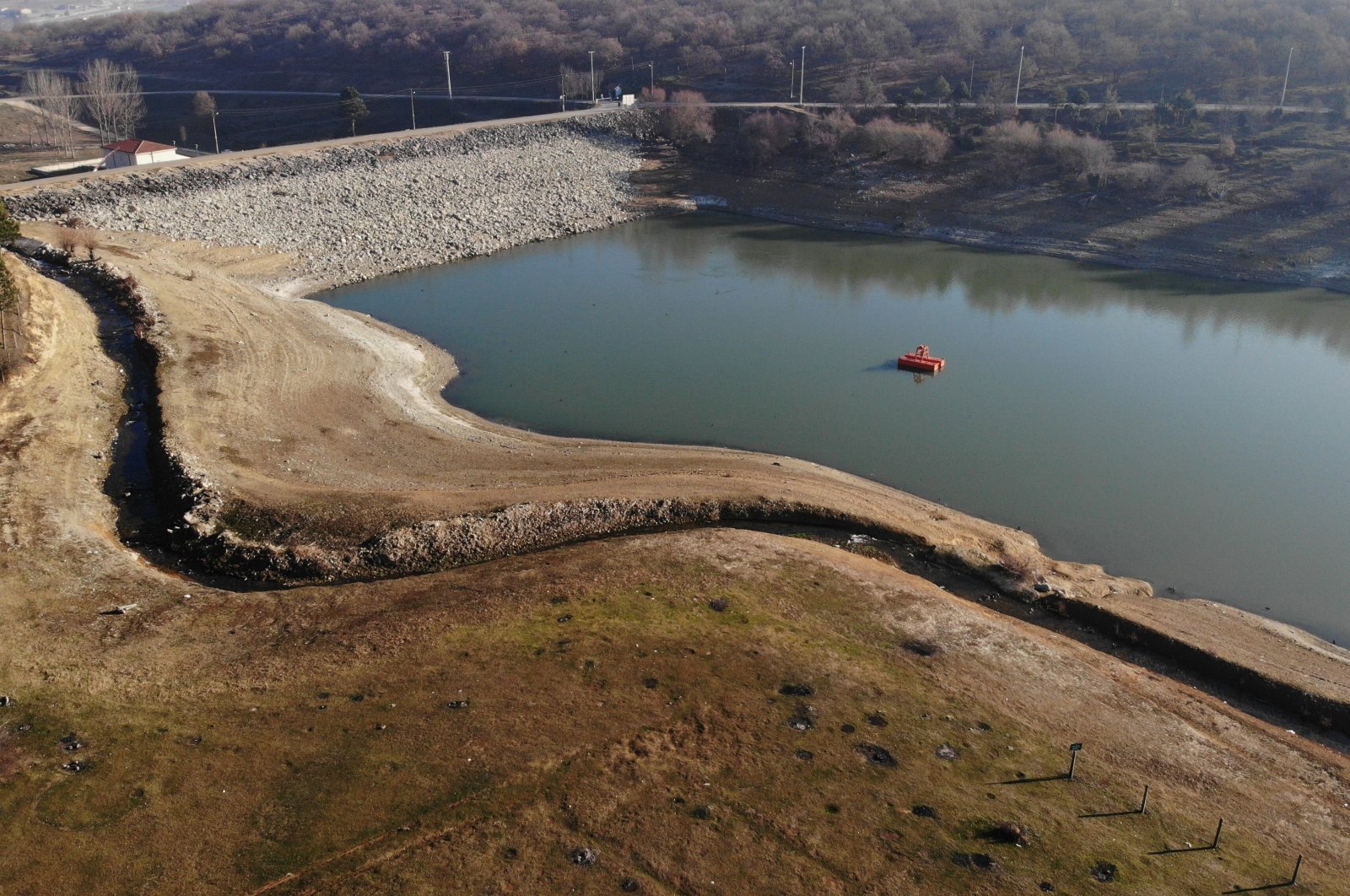 An aerial view of the Gölköy Dam, where the water levels have significantly dropped, in Bolu, northwestern Turkey, Dec. 30, 2020. (IHA Photo)
by DAILY SABAH WITH AA Jan 05, 2021 3:00 pm
RECOMMENDED

The problem, which is the ultimate result of dropping water levels in the dams due to the undesired and unexpected small amount of rain along with the need for maintenance of the aging natural gas power plants, revealed the possibility of risk in electricity supply due to unexpected malfunctions.

During the first months of the fight against the COVID-19 pandemic, there was a decrease in electricity demand due to the slowdown in economic activity. While renewable resources stood out in meeting the demand, the electricity production of lignite and hydroelectric power plants declined dramatically.

The share of renewable energy sources, excluding hydroelectricity, in electricity generation increased by 13% compared to 2019, and electricity production from natural gas increased by 18% in the same period, according to an Anadolu Agency (AA) report published Tuesday.

In contrast, the electricity production of lignite and hydroelectric power plants fell 18% and 11.5%, respectively.

The drought was the first to cause this change in electricity generation. While the total amount of water coming to the main basin dams was 80.4 billion cubic meters (bcm) in 2019, this figure decreased by 27% to 58.5 bcm in 2020, and as a result, negatively affected the electricity generation from hydroelectric power plants.

The second factor in the change was the cessation of production in five lignite power plants that did not make the necessary investments to comply with the environmental legislation at the beginning of 2020 and a partial shutdown of 3,400 megawatts (MW) of capacity for six months in another lignite power plant. With the shutdown of these power plants, there has been a big decrease in lignite electricity generation.

Cem Aşık, chairperson of the Electricity Producers Association (EÜD), told AA that these decreases in electricity production from hydroelectric and lignite were compensated primarily by renewable resources and secondly by natural gas.

Beyond that, he continued, the natural gas facilities have a role in balancing the system.

“Due to unexpected changes in consumption during the day, fluctuations occur as a natural result of the resource in renewable generation, or unexpected malfunctions in production, natural gas plants are kept ready or operating in most of the times and increasing or decreasing their production in line with the instructions provided by Turkey Electricity Generation Co. (TEIAŞ),” he explained.

Aşık stated that the course of the drought has been among the most important agenda items for the last few months and said: "Long-term meteorological forecasts can be misleading, but if we evaluate according to the current picture, hydroelectric production does not show a significant increase in the following months, but there is a significant increase in electricity consumption. If there is an increase, we may experience supply-side problems at certain times of the year. Generally, thermal power plants are expected to operate at a higher rate in such a year. "

Aşık drew attention to the importance of acting to avoid a problem in terms of capacity but underlined that it is not right to create a panic atmosphere.

Stating that Turkey's electricity generation fleet is no longer as young as they used to be, he expressed that the maintenance deadlines are approaching for major natural gas plants, “however, most of these plants could not collect the money for the maintenance expenditures in the past years. Therefore, if these maintenances are not carried out, the possibility of sudden failure that may occur stands as a risk for our country.”

Aşık, evaluating the electricity capacity of Turkey in recent years, said the 2,500 MW of the 3,000 MW total capacity commissioned in the first 10 months of 2020 consisted of renewable power plant generation.

He stated that most of the projects whose construction is advanced and expected to be commissioned in the near future consist of renewable plants.

“The biggest increase in capacity in the renewable area is expected to come from wind and solar energy. The solar energy will show an increasing trend with distributed installations as well as large projects,” he said.