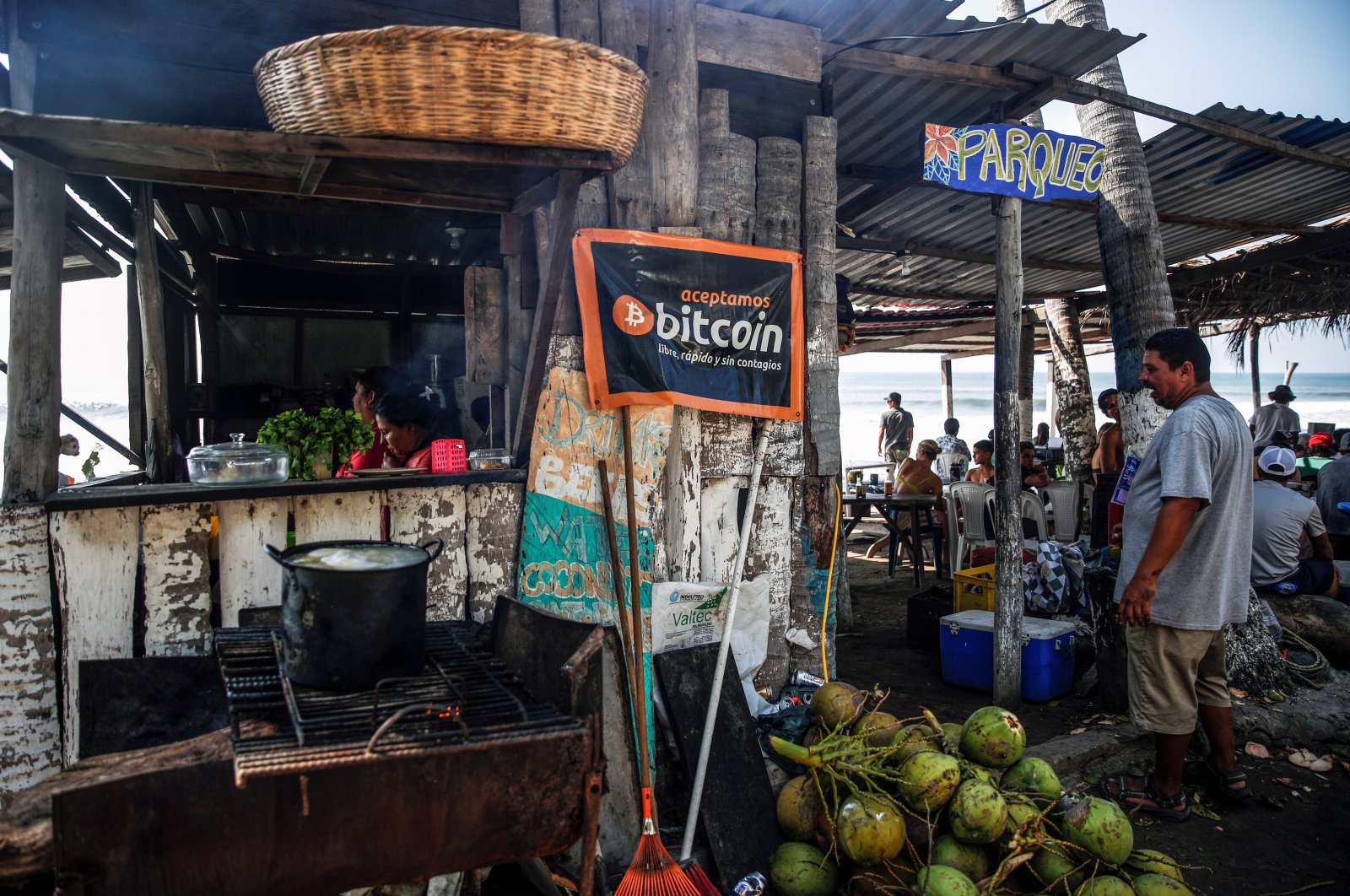 A banner that reads "We accept Bitcoin, free, fast and without contagion" is seen at a beach cafe on Punta Roca Beach in La Libertad, El Salvador, April 25, 2021. (Reuters Photo)
by Agencies Jun 06, 2021 12:17 pm
RECOMMENDED

El Salvador’s President Nayib Bukele announced on Saturday that he will send a bill to congress next week to make bitcoin legal tender in the Central American nation, touting its potential to help Salvadorans living abroad send remittances home.

The legislation would make it the world’s first sovereign nation to adopt bitcoin as legal tender.

The 39-year-old president, who has maintained approval ratings above 90% and made Twitter his preferred way of communicating, characterized it as an idea that could help El Salvador move forward.

“Next week I will send to Congress a bill that will make Bitcoin a legal tender in El Salvador," Bukele said. “In the short term this will generate jobs and help provide financial inclusion to thousands outside the formal economy, and in the medium and long term we hope that this small decision can help us push humanity at least a tiny bit into the right direction.”

The U.S. dollar is El Salvador's official currency. About one-quarter of El Salvador's citizens live in the United States and last year, despite the coronavirus pandemic, they sent home more than $6 billion in remittances.

Bukele's New Ideas party holds a supermajority in the new congress seated May 1, giving any legislative proposal from the president a strong likelihood of passage.

Additional details of the plan were not released, but Bukele in subsequent messages on Twitter noted that Bitcoin could be “the fastest growing way to transfer $6 billion a year in remittances.”

He said that a big chunk of those money transfers was currently lost to intermediaries and that with bitcoin more than a million low-income families could benefit.

He also said 70% of El Salvador's population does not have a bank account and works in the informal economy. Bitcoin could improve financial inclusion, he said.

Strike, a mobile payments app that launched in El Salvador in March, said in a statement that it welcomed the legislation and was working with the country to make using bitcoin technology a success.

“This is the shot heard 'round the world for bitcoin'," Strike founder and CEO Jack Mallers, who introduced Bukele's video, was quoted as saying at the Miami conference.

Riding his high popularity and his party's dominant performance in the Feb. 28 elections, Bukele has concentrated power. His party's supermajority in congress ousted the justices of the Constitutional Chamber of the Supreme Court on May 1. They then replaced the attorney general.

They had been critical of some of Bukele's more drastic measures during the pandemic, including a mandatory stay-at-home order and containment centers where those caught violating the policy were detained.

Last month, the White House Special Envoy for the Northern Triangle, Ricardo Zúñiga, said during a visit to El Salvador that the U.S. government would like to see El Salvador reverse the moves against the court and the attorney general. Bukele said that would not happen.

Bukele's concentration of power, attacks on critics and open disdain for checks on his power have raised concerns about El Salvador's path. However, Bukele has a wide base of support in part due to the utter failure of the country's traditional parties – who ruled during the past 30 years – to improve people's lives and to his ability to provide short-term benefits.