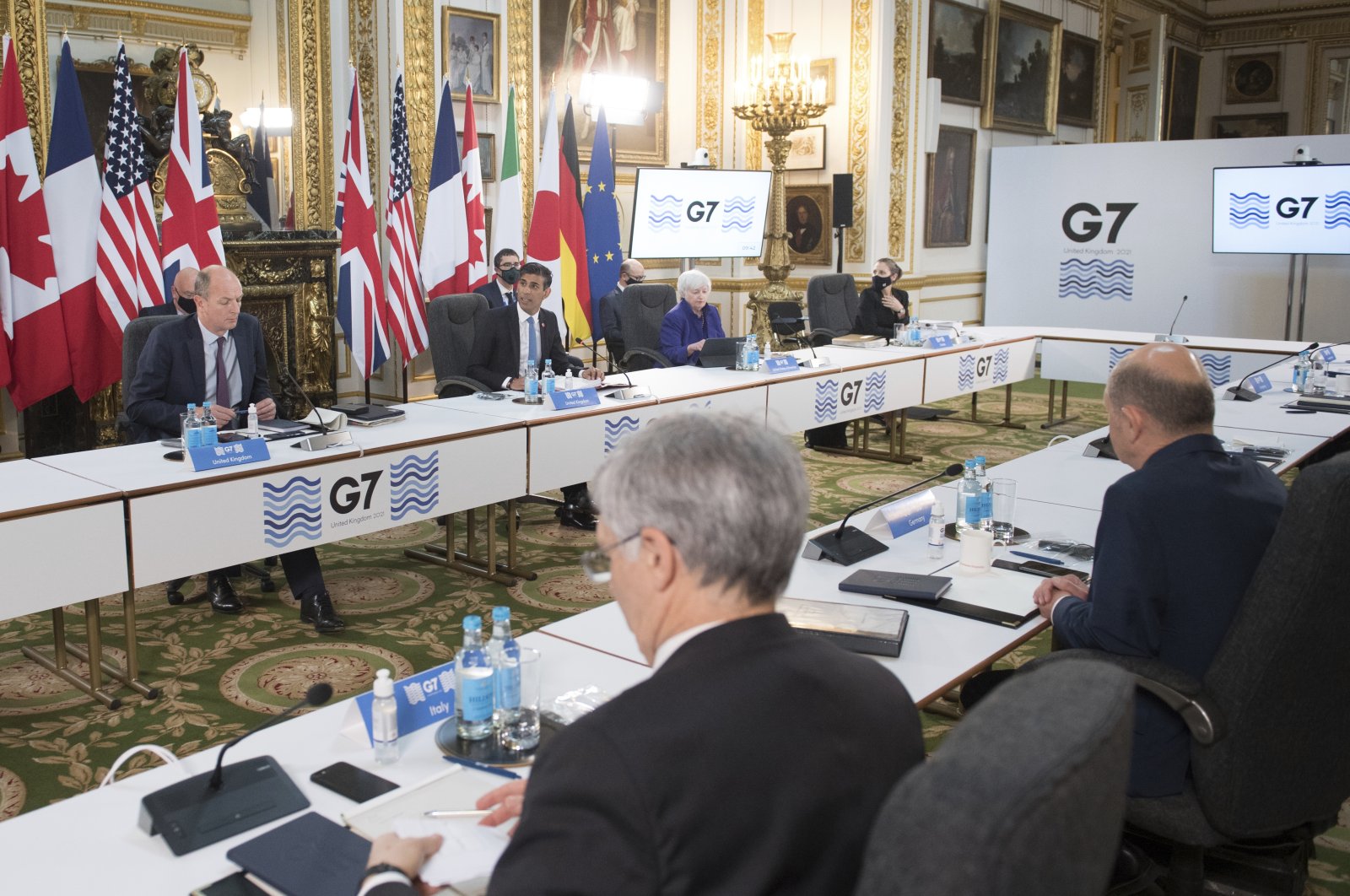 Britain's Chancellor of the Exchequer Rishi Sunak, back center, and U.S. Treasury Secretary Janet Yellen, center right, at a meeting of finance ministers from across the G-7 nations at Lancaster House in London, U.K., June 4, 2021. (Pool via AP)
by REUTERS Jun 05, 2021 11:36 am
RECOMMENDED

The Group of Seven nations agreed Saturday to commit to a global minimum tax of at least 15% on a country by country basis.

"We commit to reaching an equitable solution on the allocation of taxing rights, with market countries awarded taxing rights on at least 20% of profit exceeding a 10% margin for the largest and most profitable multinational enterprises," a communique from G-7 finance ministers seen by Reuters said.

"We will provide for appropriate coordination between the application of the new international tax rules and the removal of all Digital Services Taxes, and other relevant similar measures, on all companies."

The accord, which could form the basis of a global pact next month, is aimed at ending a decadeslong "race to the bottom" in which countries have competed to attract corporate giants with ultra-low tax rates and exemptions.

That has in turn cost their public coffers hundreds of billions of dollars – a shortfall they now need to recoup all the more urgently to pay for the huge cost of propping up economies ravaged by the coronavirus crisis.

"We are just one millimeter away from a historic agreement," French Finance Minister Bruno Le Maire told the BBC on Friday as he and other G-7 finance chiefs met in person for the first time since the start of the pandemic at talks in London.

British Finance Minister Rishi Sunak, who is chairing the talks, also wants large companies to be required to declare their environmental impact in a consistent way. The G-7 is likely to commit to avoid withdrawing COVID-19 stimulus too early as well.

Rich nations have struggled for years to agree on a way to raise more revenue from large multinationals such as Google, Amazon and Facebook, which often book profits in jurisdictions where they pay little or no tax.

United States President Joe Biden's administration has given the stalled talks fresh impetus by proposing a minimum global corporation tax rate of 15%, above the level in countries such as Ireland but below the lowest level in the G-7.

One question is whether 15% should be the final rate or whether it should be regarded as the floor for a final deal, leaving room to agree a higher level at subsequent talks within the broader G-20 group of nations scheduled for Venice in July.

Beyond the level itself, just as important for Britain and many others is that large multinationals pay more tax where they make their sales – not just where they book profits, or locate their headquarters.

"Their business model gives them chances to avoid taxes ... much more than other companies," German Finance Minister Olaf Scholz said.

The U.S. is also holding out for an immediate end to the digital services taxes levied by Britain, France and Italy, which it views as unfairly targeting U.S. tech giants for tax practices that European companies also use.

"It's going to go right to the wire," one source close to the talks said. "The United States are holding to their position, as are we."

British, Italian and Spanish fashion, cosmetics and luxury goods exports to the United States will be among those facing new 25% tariffs later this year if there is no compromise.

The U.S. has proposed levying the new global minimum tax only on the world's 100 largest and most profitable companies.

Britain, Germany and France are open to this but want to ensure companies such as Amazon – which has lower profit margins than other tech firms – do not escape the net.