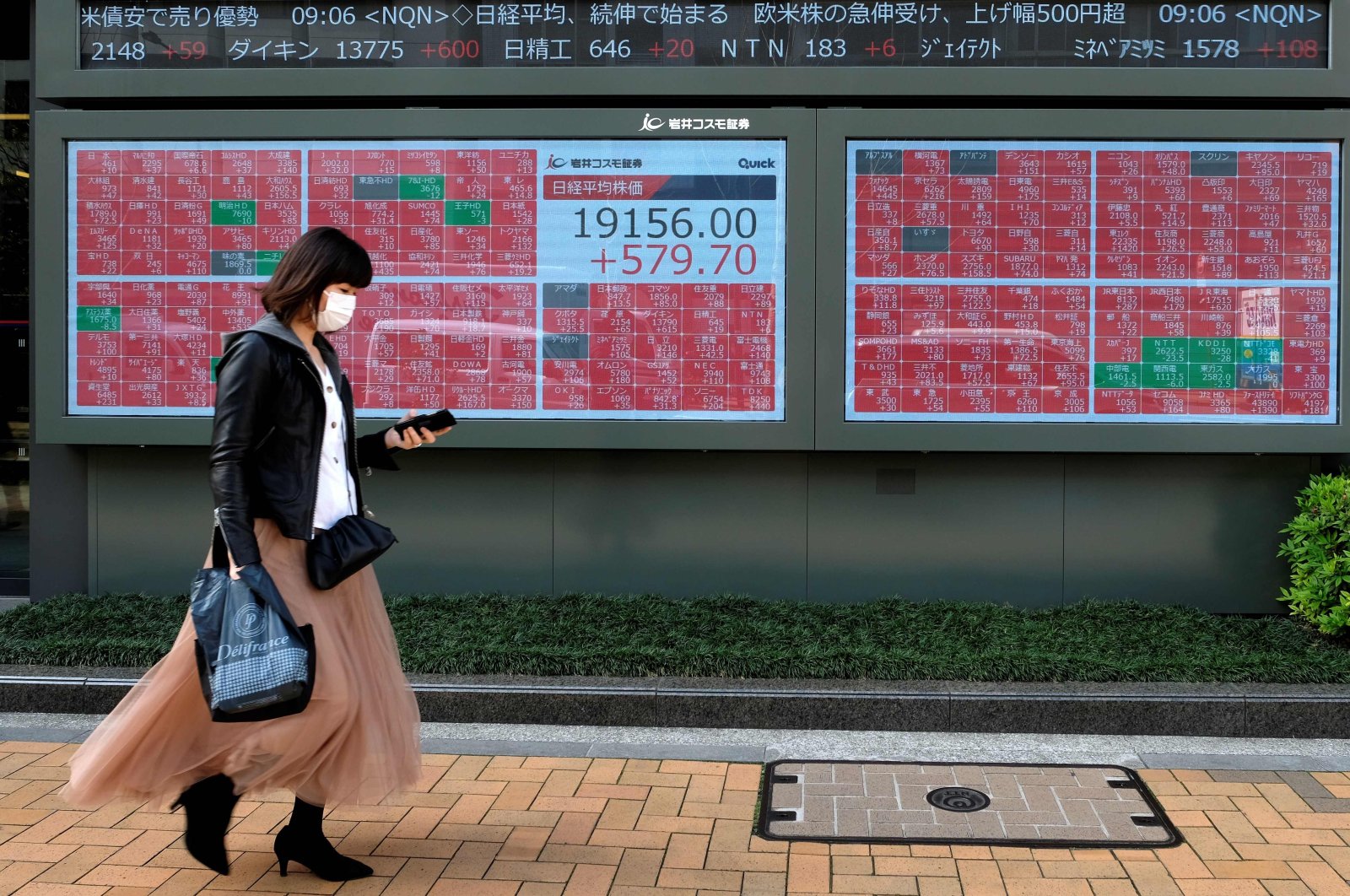 A pedestrian walks past a quotation board displaying share prices of the Tokyo Stock Exchange in Tokyo on April 7, 2020. (AFP Photo)
by Compiled from Wire Services Apr 07, 2020 11:09 am

Investors have been waiting anxiously for signs that the rate of new infections may be hitting its peak, which would give some clarity about how long the upcoming recession will last and how deep it will be

Stocks around the world rose Tuesday, with investors focusing on early signs that the coronavirus pandemic may be easing, even as major companies still take steps to shore up cash after lockdowns crushed global demand.

The pan-European STOXX 600 index rose 2.7% at 0716 GMT – hitting its highest in almost a month, with governors of several hard-hit U.S. states pointing to tentative signs the outbreak might be starting to plateau.

London’s blue-chip FTSE 100 index also surged 3.3% by 0822 GMT, extending gains for the second day as the outbreak showed signs of leveling off in New York, while hardest-hit Italy and Spain have started looking ahead to easing lockdowns after steady declines in their fatality rates. Denmark and Austria have also started making plans to lift restrictions slowly as they see light at the end of the tunnel.

"You can't say that we've definitely turned the corner for certain but it does appear as though that is a good sign," Mark Heppenstall, at Penn Mutual Asset Management, said.

The global rating agency Moody’s also injected confidence into the market after saying the U.S. government’s economic policy response to the coronavirus could pave the way for a recovery in the second half of 2020. However, it warned that downside risks to growth remain high as the spread of the virus and duration of lockdowns remain “highly uncertain.”

Meanwhile, Mumbai soared 6%, while Singapore piled on more than 3% and Bangkok more than 5%.

Manila and Wellington also gained, though Sydney and Jakarta slipped.

"Falling infection and death rates from COVID-19 in the worst of the European and U.S. epicenters has inspired markets that the worst of the outbreak is peaking," said OANDA's Jeffrey Halley.

"Whether that is, in fact, the case or not ... a world hungry for any good news has leapt on board the recovery trade with equities, in particular, outperforming."

Adding to the optimistic outlooks were further measures to support economies around the world, including a trillion-dollar package in Japan and central bank moves in China.

European Union leaders are also closing in on a rescue for nations worst hit in the region, according to sources, though not at the level called for by Italy and Spain.

The bloc's finance ministers will hold a videoconference Tuesday when they are expected to agree to use the eurozone's $443-billion bailout fund. However, it is thought they will not act on a proposal to issue "coronabonds" that would pool borrowing among EU nations.

While the mood is a little better on the trading floors, analysts remain cautious.

"Still, the market will need to come up for air, as for the real economy to recover the pace of play will be dictated more by (governments') willingness to relax social distancing measures, and the COVID-19 curve would probably need to flatten much more," said AxiCorp's Stephen Innes.