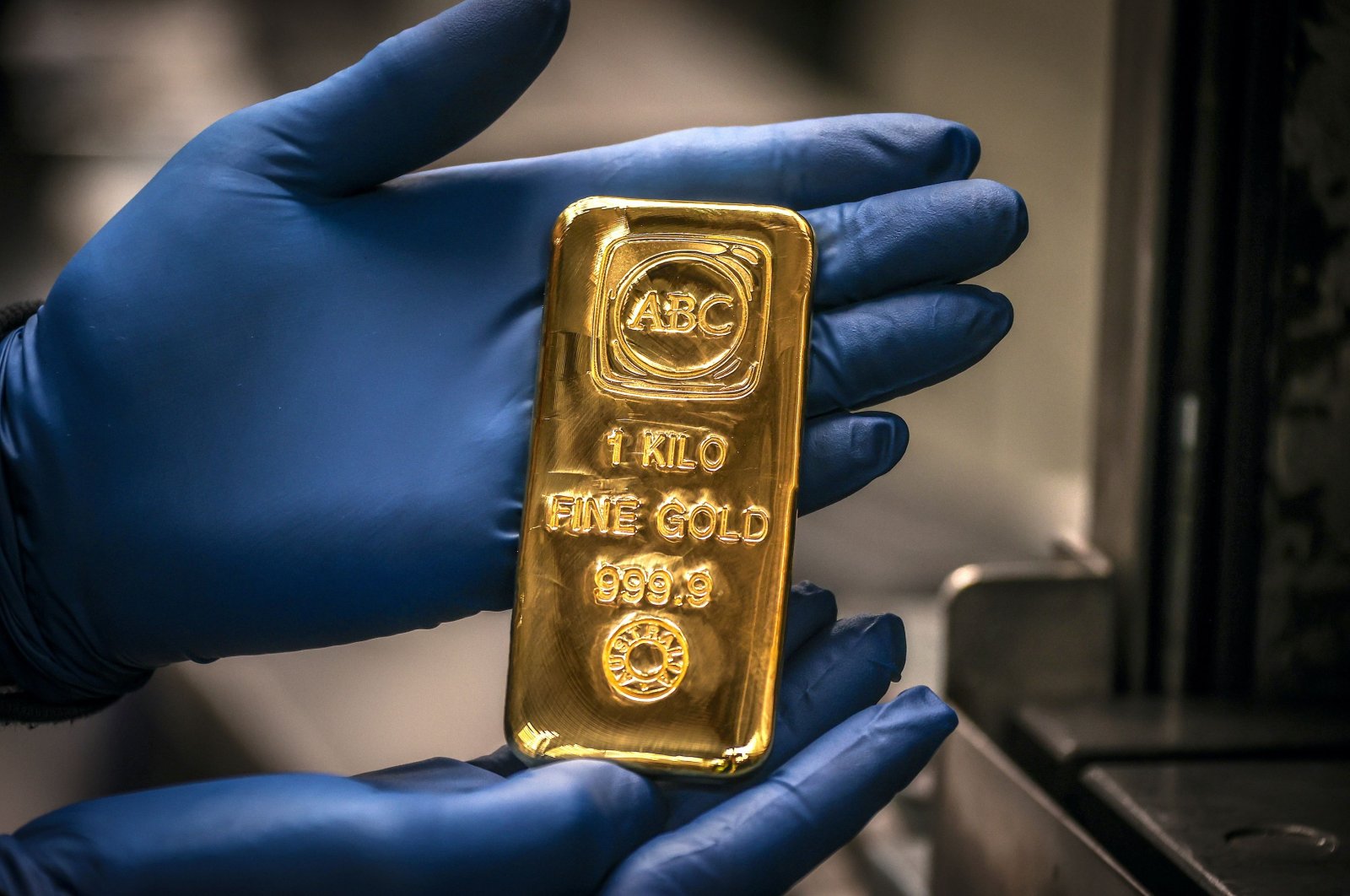 A worker displays a 1-kilogram gold bullion bar at the ABC Refinery in Sydney, Australia, Aug. 5, 2020. (AFP Photo)
by DAILY SABAH WITH AGENCIES Aug 12, 2020 10:27 am
Edited By Sinan Öztürk
RECOMMENDED

Stock markets held their own Wednesday after doubts emerged about a fresh U.S. stimulus, while it was another wild day for gold and silver.

A lively start to European trading saw sterling shrug at the news Britain had seen its worst economic quarter on record thanks to COVID-19. Gold’s swing came after its biggest fall in seven years, and German Bund yields hit two-week highs amid a deluge of global debt issuance.

In a dramatic move, gold, which recently surpassed the $2,000 mark for the first time ever, swung from being down 2% to being up 1.7% at $1,935 per ounce, a day after it suffered its biggest daily fall in seven years.

The spot metal fell 5.7% on Tuesday, the sharpest drop since 2013 and a remarkable slump for an asset that rarely shifts more than a percentage point in a day. It dropped as low as $1,863 an ounce Wednesday before bouncing back, down from a record of $2,064 an ounce earlier this month.

Silver was even wilder, rising nearly 4% in Europe after a 15% plunge Tuesday.

"In today's instance, the vaccine news is likely not sufficient to change the macro narrative, insofar as it is seen as a medical mistake in advancing too quickly through testing procedures," he said, referring to Russia’s announcement of a COVID-19 vaccine Tuesday.

Mixed sentiment had dragged on Asian stocks as sniping continued between China and the U.S. Beijing had also reported weaker-than-expected loan growth, while the U.S. Senate's majority leader described stimulus talks there overnight as "at a bit of a stalemate.”

"The bias at the moment is probably to fade the S&P 500 and fade risk generally," said Societe Generale strategist Kit Juckes. "What happens next probably depends on what happens in U.S. equity markets (which are focused on stimulus) ... That might be the decisive factor for short-term sentiment."

On Wall Street on Tuesday, the S&P 500 snapped a seven-day winning streak after coming within reach of its all-time peak hit in February just before the global COVID-19 outbreak.

Barring a bipartisan deal on a stimulus, the U.S. economy could be left with measures U.S. President Donald Trump called for Saturday through executive orders to bypass Congress.

"We have enormous uncertainty. It appears it's getting harder for both sides to compromise as the election is nearing ... Trump's proposals would be smaller than markets have expected. There's questions over whether they are viable, too," said Junpei Tanaka, a strategist at Pictet.

The 10-year U.S. Treasuries yield climbed a couple of basis points to 0.67% in Europe to stay at a one-month high.

The 10-year yield (+6.6 basis points) and 30-year (+7.5 basis points) yields saw their biggest increases in over a month on Tuesday, while the 2s10s curve steepened 4.6 basis points, the most since June 5. The gap between U.S. two-year and 10-year Treasury yields is a metric closely watched for signs of a slowdown.

On top of hedge selling ahead of the largest-ever 10-year note auction later in the day, bonds have also lost some of their safe-haven allure on rising hopes of vaccines against COVID-19.

Russian President Vladimir Putin said Tuesday his country was the first to grant regulatory approval to a COVID-19 vaccine after less than two months of human testing.

While Moscow's decision raised some eyebrows, the news lifted hope some of the vaccines currently in development would become available earlier than expected.