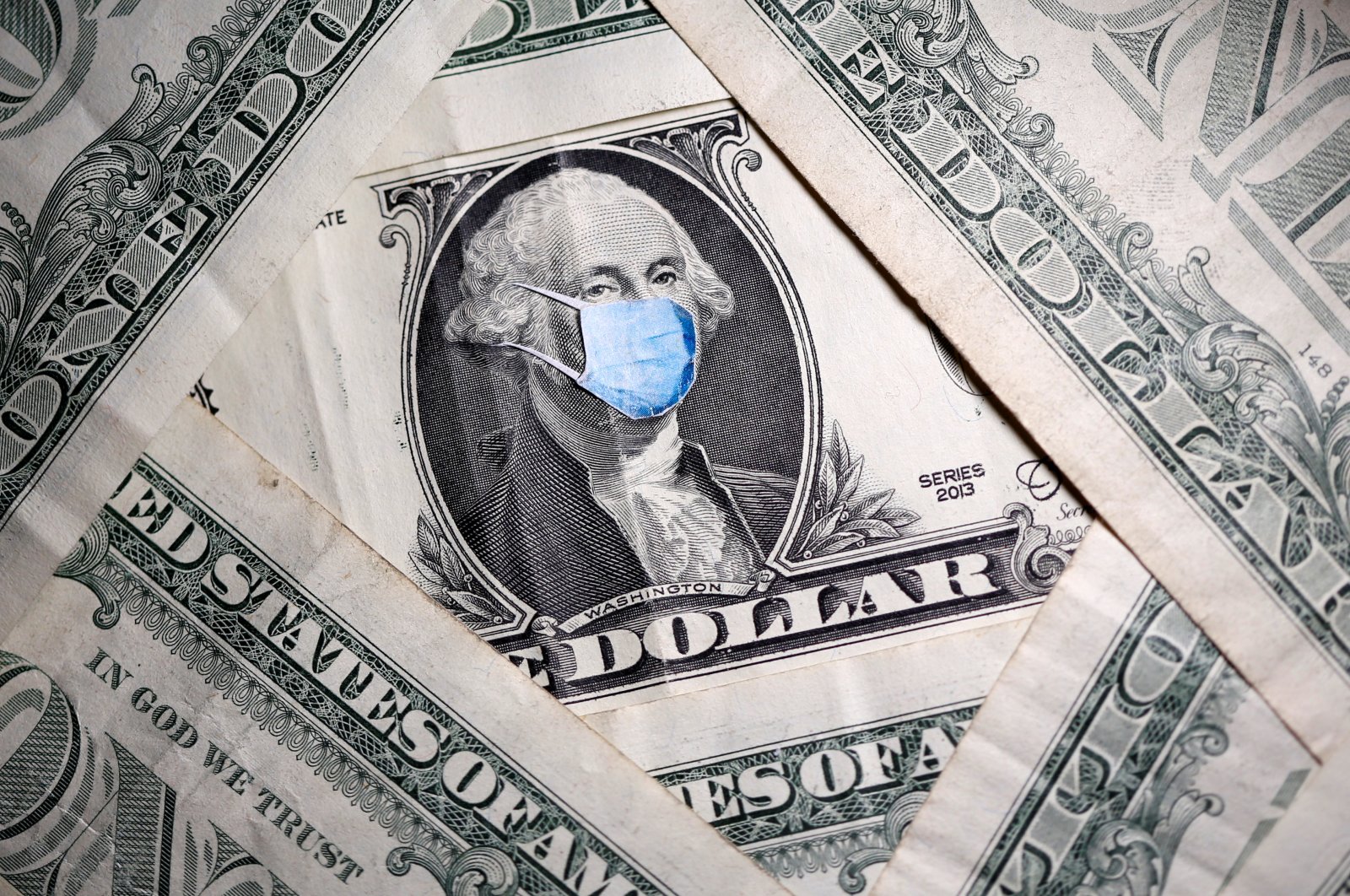 George Washington is seen with printed medical mask on the one dollar banknote in this illustration taken, March 31, 2020. (Reuters Photo)
by Compiled from Wire Services Apr 07, 2020 5:33 pm
RECOMMENDED

Global sovereign debt issuance soared to a record $2.1 trillion in March, as governments rushed to raise funds to fend off the economic fallout from the COVID-19 pandemic, the Institute of International Finance (IIF) said Tuesday.

The figure more than doubles the 2017-2019 average of $0.9 trillion, according to the institute, which said the with COVID-19 fiscal response in full swing, the global debt burden is set to rise dramatically throughout 2020.

The latest surge in government debt sales comes after levels had already risen in 2019 when global debt across all sectors bulged by over $10 trillion to exceed $255 trillion.

Governments and central banks around the world have unleashed unprecedented fiscal and monetary stimulus and other support for economies floored by the coronavirus pandemic with the G-20 pledging on March 26, it would inject more than $5 trillion into the global economy to limit job and income losses.

Under a scenario that saw net government borrowing double this year in combination with a 3% contraction in global GDP, debt levels at the end of the year could surge to 342%, IIF director Emre Tiftik wrote in the report.

"With the COVID-19 fiscal response in full swing, the global debt burden is set to rise dramatically in 2020," Tiftik wrote.

"Remarkable uncertainty around the scale and duration of the pandemic makes point estimates challenging. A sharp upward trajectory in debt levels looks all but certain."

Debt in developing countries had also risen in 2019, with emerging markets adding over $3.4 trillion and debt exceeding $71 trillion. That has brought the debt-to-GDP ratio across emerging markets to a record of 220% of GDP, up from 147% in 2007.

Hard-currency debt across emerging markets has since exceeded $5.3 trillion, and now makes up around a fifth of all emerging-market debt ex-China and outside the financial sector, the IIF has found. Hard-currency debt has become a potential flashpoint for emerging markets, which have seen borrowing costs soar amid global recession fears, making it costlier to refinance and service debt.

The IIF also flagged refinancing challenges ahead. Over $20 trillion of global bonds and loans are coming due by the end of 2020, of which $4.3 trillion are due in emerging markets. Developing economies needed to refinance $730 billion in hard-currency debt this year.

"Finding the right exit strategy could be even more challenging this time around," Tiftik added.