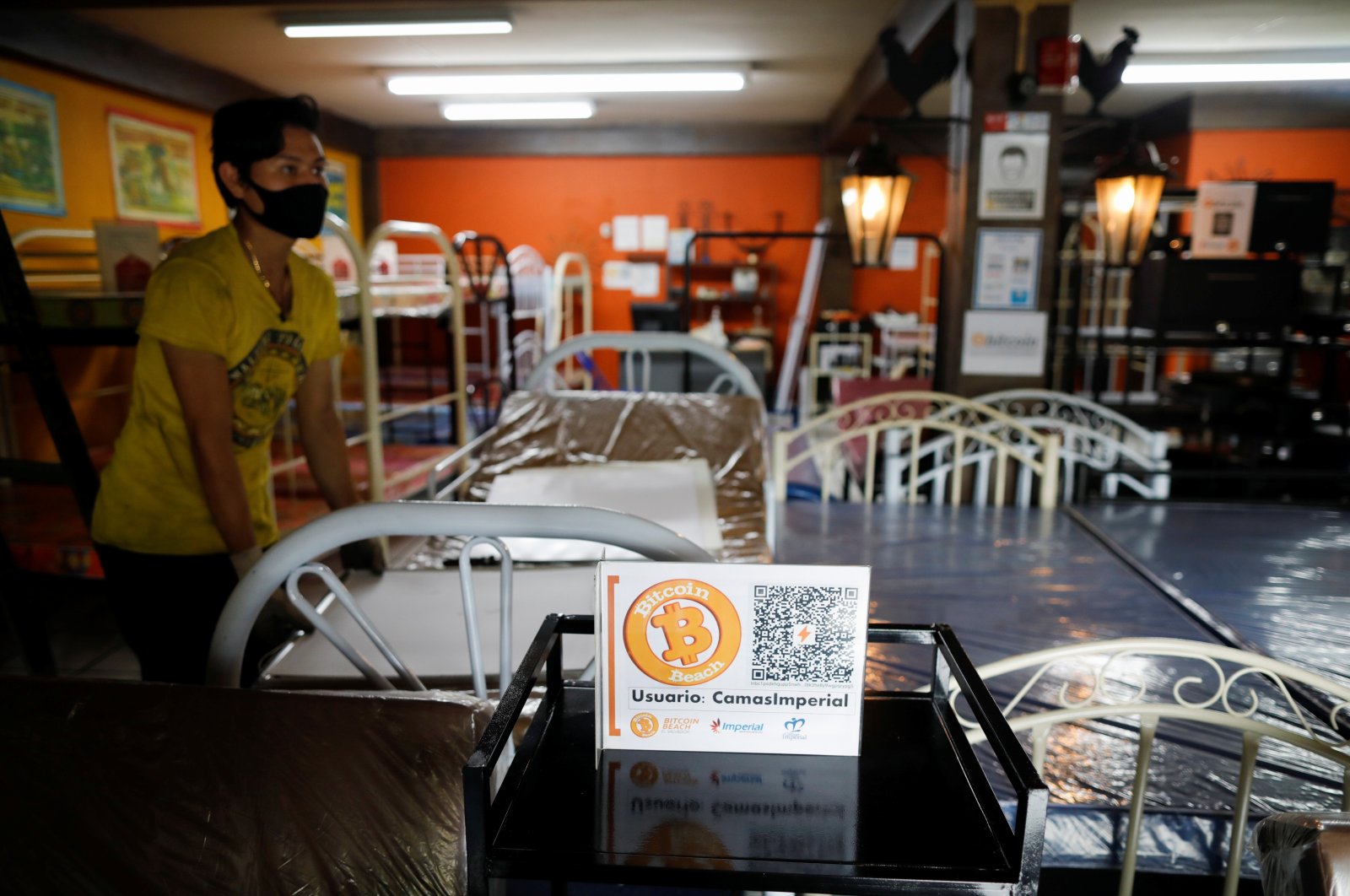 An electrician works at Camas Imperial furniture store where bitcoin is accepted as a payment method, in Santa Tecla, El Salvador, Sept. 6, 2021. (Reuters Photo)
by Agencies Sep 07, 2021 10:18 am
RECOMMENDED

El Salvador on Tuesday became the first country in the world to adopt bitcoin as legal tender, a real-world experiment proponents say will lower commission costs for billions of dollars sent home from abroad but which critics warned may fuel money laundering.

The plan spearheaded by the young, charismatic and popular President Nayib Bukele is aimed at allowing Salvadorans to save on the $400 million spent annually in commissions for remittances, mostly sent from the United States.

"Tomorrow, for the first time in history, all the eyes of the world will be on El Salvador. #Bitcoin did this," Bukele said on Twitter Monday.

Last year alone remittances to El Salvador amounted to almost $6 billion, or 23% of its gross domestic product (GDP), one of the highest ratios in the world.

Polls show Salvadorans are skeptical about using bitcoin and wary of the volatility of the cryptocurrency that critics say could increase regulatory and financial risks for financial institutions.

"This bitcoin is a currency that does not exist, a currency that will not benefit the poor but the rich," said skeptic Jose Santos Melara, who took part in a protest by several hundred people in the capital San Salvador last week.

"How will a poor person invest (in bitcoin) if they barely have enough to eat?" Melara told the Agence France-Presse (AFP).

"These are decisions the administration and lawmakers have taken without consulting" the population, said Laura Andrade, director of the Public Opinion Institute of the Central American University, which found in a poll that 70% of Salvadorans opposed the move.

"We see that people do not perceive a positive impact to significantly transform their living conditions," she told AFP.

Nearly two-thirds of Salvadorans questioned for the poll said they had no interest in downloading the "Chivo" digital wallet that will allow the cryptocurrency to be converted into dollars and withdrawn without commission.

Still, some residents are optimistic.

"It's going to be beneficial ... we have family in the United States and they can send money at no cost, whereas banks charge to send money from the United States to El Salvador," said Reina Isabel Aguilar, a store owner in El Zonte Beach, some 49 kilometers (30 miles) southwest of capital San Salvador.

El Zonte is part of the so-called Bitcoin Beach geared toward making the town one of the world's first bitcoin economies.

In the run-up to the launch, the government has already been installing ATMs of the Chivo digital wallet.

More than 200 bitcoin teller machines are said to be installed, some guarded by soldiers to prevent possible arson by opponents. And Bukele has promised $30 for each citizen who adopts the currency.

The president on Monday looked to temper expectations for quick results and asked for patience.

"Like all innovations, El Salvador's bitcoin process has a learning curve. Every road to the future is like this and not everything will be achieved in a day, or in a month," Bukele said on Twitter, a platform he often uses to talk up his achievements or excoriate opponents.

On Monday, El Salvador bought its first 400 of the cyrptocurrency, temporarily pushing prices for bitcoin 1.49% higher to more than $52,680. The transaction was carried in two tranches of 200, and Bukele promised more were coming.

The 400 bitcoins were trading at around $21 million, according to the cryptocurrency exchange app Gemini.

The cryptocurrency has been notoriously volatile. Just this spring, it rose over $64,000 in April and fell almost as low as $30,000 in May.

Some analysts fear the move to make bitcoin legal tender alongside the U.S. dollar could muddy the outlook for El Salvador's quest to seek a more than $1 billion financing agreement with the International Monetary Fund (IMF).

Oscar Cabrera, an economist at the University of El Salvador, said the currency's high volatility will have a "negative impact" on consumers, affecting the price of goods and services.

For its part, the Salvadoran Foundation for Economic and Social Development (FUSADE) said it was "unconstitutional" to make it compulsory for merchants to accept bitcoin as a form of payment.

In June, El Salvador's parliament approved a law to allow the crypto money to be accepted as tender for all goods and services, along with the U.S. dollar.

But Bukele, who does not shy away from controversy, on Monday retweeted a video that showed his face superimposed on actor Jaime Foxx in a scene from Django Unchained, Quentin Tarantino's film about American slavery. The video portrayed Bukele whipping a slave trader who had the IMF emblem emblazoned on his face.

His own tweet said: "we must break the paradigms of the past. El Salvador has the right to advance towards the first world."

The country is relying on remittances to boost a struggling economy that contracted 7.9% in 2020 due in large part to the coronavirus pandemic.

Economists and international bodies such as the World Bank, IMF and Inter-American Development Bank have expressed concerns about El Salvador's bitcoin adoption.

The United States has urged El Salvador to ensure a "regulated," "transparent" and "responsible" use of the cryptocurrency, and to protect itself from "malign actors" such as hackers seeking ransom money.