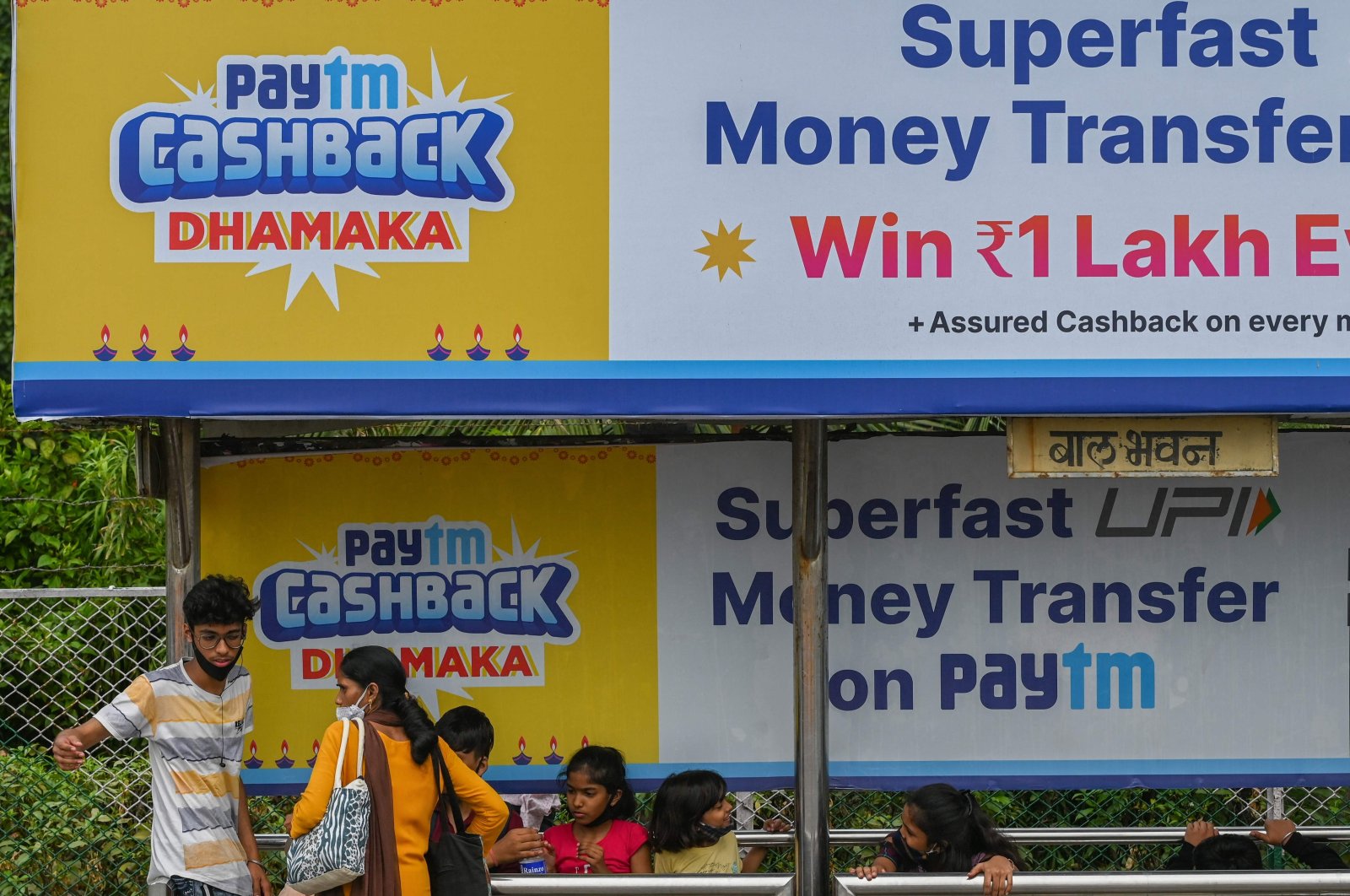 A family sits next to a billboard advertisement for Paytm, an Indian cellphone-based digital payments platform, in Mumbai, India, Nov. 7, 2021. (AFP Photo)
by French Press Agency - AFP Nov 08, 2021 9:45 am
RECOMMENDED

India's mobile phone-based payment platform Paytm, which is looking to raise nearly $2.5 billion, opened the country’s biggest-ever initial public offering (IPO) Monday in what has already been a record year for share listings.

Paytm is backed by Chinese tycoon Jack Ma's Ant Group, Japan's SoftBank and Warren Buffett's Berkshire Hathaway, which together own around a third of the company.

The firm was founded barely a decade ago by Vijay Shekhar Sharma, the son of a schoolteacher who says he learned English by listening to rock music.

He was ranked India's youngest dollar billionaire four years ago at the age of 38 and now has a net worth of $2.4 billion, according to Forbes. He owns a nearly 14% stake.

Paytm was issuing fresh shares worth 83 billion rupees ($1.1 billion), with existing shareholders selling stocks worth $1.34 billion, according to the prospectus.

The IPO is expected to make Paytm India's most valuable tech company with a valuation of $20 billion, up 25% from two years ago.

The platform was launched in 2010 and quickly became synonymous with digital payments in a country traditionally dominated by cash transactions.

It has benefited from the government's efforts to curb the use of cash – including the demonetization of nearly all banknotes in circulation five years ago – and most recently, from COVID-19.

"I didn't know corona would happen but Paytm was very useful to me during the pandemic," Mumbai grocery shop owner Naina Thakur told Agence France-Presse (AFP).

Thakur said about a third of her customers pay her for milk, bread and other daily groceries via Paytm.

"It's much easier than a bank transfer because they only need my mobile number to pay and I get the settlement within seven hours," she said.

Thakur is one of nearly 22 million Indian shop owners, taxi and rickshaw drivers and other vendors who accept payments as low as 10 rupees ($0.13) using Paytm's ubiquitous blue-and-white QR code stickers.

The platform had 337 million customers at the end of June, according to the company's regulatory filing. In 2020-21 it undertook transactions worth more than $54 billion.

The number of mobile payments in India has skyrocketed, accounting for 26 billion transactions in the 2020-21 financial year.

Foreign giants have also sought to grab a piece of the pie including Google and Amazon. Another major player is PhonePe, owned by Flipkart in which United States retail giant Walmart owns a majority stake.

'May not achieve profitability'

But Paytm has made continual losses and is not sure when it will make a profit. It reported a net loss of 17 billion rupees last year on revenues of nearly 32 billion rupees.

"We expect to continue to incur net losses for the foreseeable future and we may not achieve profitability in the future," the prospectus warned.

Paytm has reported negative cash flows for the last three years, primarily due to operational losses.

Ahead of the offer, Paytm raised 82.35 billion rupees from 74 anchor investors including BlackRock and the Canada Pension Plan Investment Board last week.

Paytm will issue shares in a price band of 2,080-2,150 rupees in the offering, which is slated to close Wednesday.

Indian companies have raised a record $9.7 billion through IPOs in 2021 so far, figures from market monitor Prime Database showed.

Food delivery giant Zomato was the country's biggest IPO of the year until now with its $1.3 billion share issue in July.

This year, India has also seen a record number of unicorns created – startups with a valuation of $1 billion or more – benefiting from investors spooked by a crackdown on technology giants in China.