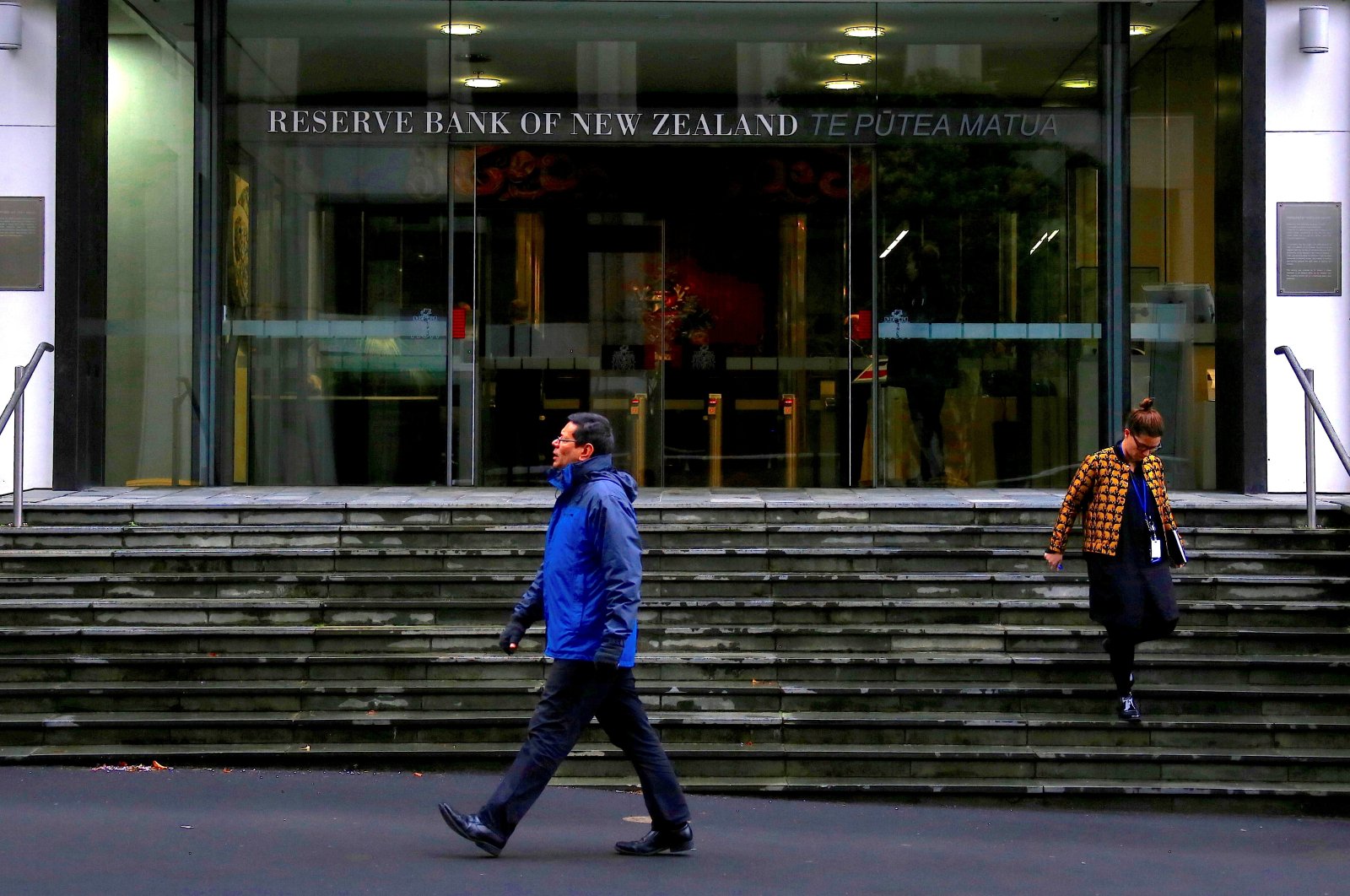 Pedestrians walk near the main entrance of the Reserve Bank of New Zealand located in central Wellington, New Zealand, July 3, 2017. (Reuters Photo)
by Agencies
Oct 06, 2021 11:10 am

New Zealand’s central bank raised interest rates for the first time in more than seven years on Wednesday and signaled further tightening to come, as it looks to get on top of inflationary pressures and cool a red-hot housing market.

The Reserve Bank of New Zealand lifted its official cash rate for the first time in seven years but its resolutely hawkish tone only seemed to add to expectations that the Fed will follow suit and the kiwi dipped as U.S. yields rose.

The 25 basis point rate hike marks the start of a tightening cycle that had been expected to begin in August but was delayed after an outbreak of the coronavirus delta variant and a lockdown that is continuing in its biggest city Auckland.

The increase in the cash rate to 0.50% by the Reserve Bank of New Zealand (RBNZ) had been forecast by all 20 economists polled by Reuters.

The New Zealand dollar briefly rose after the announcement but fell back to $0.6930, in line with broader market moves.

“It was pretty much in line with what everyone was picking,” Jason Wong, senior market strategist at BNZ in Wellington, told Reuters. “We’re on a path towards a series of rate hikes and the market is well priced for that.”

Announcing its decision, the RBNZ said further removal of monetary policy stimulus was expected, with future moves depending on the medium-term outlook for inflation and employment.

The rate hike puts New Zealand ahead of most other developed economy nations as central banks look to wind back emergency-level borrowing costs, although countries including Norway, the Czech Republic, and South Korea have already raised rates.

In neighboring Australia, the central bank held interest rates at a record low of 0.1% for an 11th straight month on Tuesday.

The South Pacific nation has enjoyed a rapid economic recovery since a COVID-19-driven recession last year, partly because it eliminated coronavirus and reopened its economy before others.

But with its borders still shut, labor and goods shortages are pushing up inflation, as well as contributing to a surging property market, which has been driven by ultra-low interest rates.

“Demand shortfalls are less of an issue than the economy hitting capacity constraints ...,” the RBNZ Committee noted in the minutes of the meeting.

The central bank said headline consumer price inflation is expected to increase above 4% in the near term but return toward its 2% midpoint over the medium term.

The last interest rates move by the bank was a cut of 0.75 percentage points in March 2020, when the pandemic was first taking hold.

Recent COVID-19 restrictions have not materially changed the medium-term outlook for inflation and employment, and economic activity will recover quickly when the measures are eased, it added.

But economists said the RBNZ may not race ahead with its hiking cycle because of the current global uncertainty and the delta variant outbreak dragging on in Auckland.

“(We) remain of the view that further rate hikes will be in 25 basis point increments rather than 50 basis point moves,” said Citibank economist Josh Williamson.

Earlier this week, Prime Minister Jacinda Ardern announced a cautious plan to ease the lockdown restrictions, acknowledging what other countries did long ago: It can no longer completely get rid of the coronavirus.

Since early in the pandemic, New Zealand had pursued an unusual zero-tolerance approach to the virus through strict lockdowns and aggressive contact tracing.

The strategy kept outbreaks largely in check. While the country has kept its borders mostly closed, domestic business activity and trade have suffered less than in many other countries.

“The RBNZ’s decision to begin its hiking cycle while Auckland is still in lockdown highlights that the New Zealand economy is on the brink of overheating,” Capital Economics said in a commentary, according to The Associated Press (AP).

It said it expects further rate hikes in the coming months.

In August, a central bank official confirmed it had also considered a 50-basis-point move that month, before taking a rate hike off the table altogether due to the lockdown.

Central banks worldwide have been reassessing their policies as a faltering recovery takes hold after the pandemic downturns in 2020.

The decision comes as the U.S. Federal Reserve (Fed) inches toward cutting back on its own massive support for the U.S. economy, with a rate hike expected perhaps by next year.

In Japan, the central bank has been reducing some asset purchases though it shows no sign of backing away from its efforts to keep interest rates near zero after years of failing to attain a target interest rate of 2%.