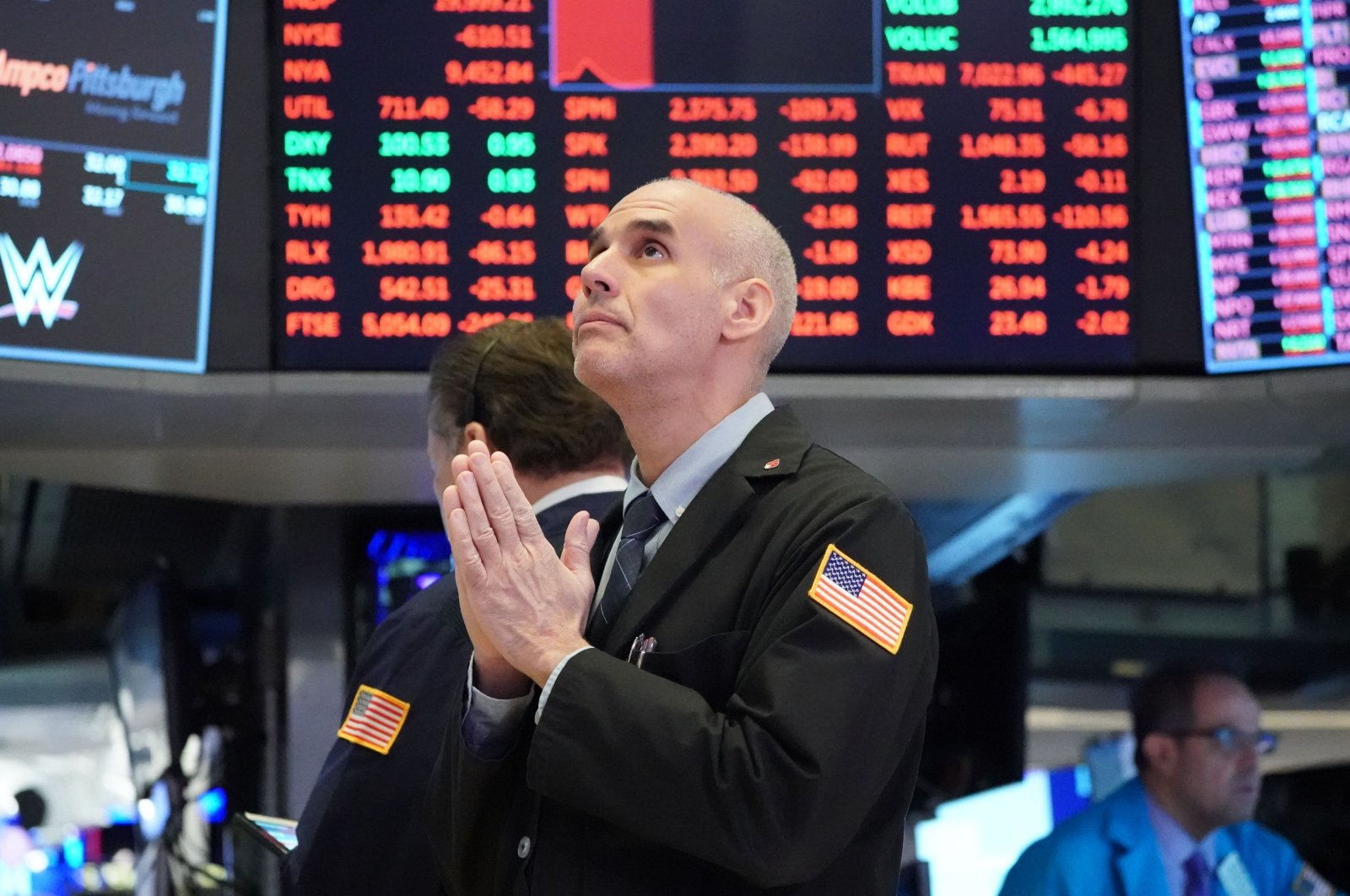 Traders work on the floor at the opening bell of the Dow Industrial Average at the New York Stock Exchange, March 18, 2020. (AFP Photo)
by Compiled from Wire Services Mar 18, 2020 8:06 pm
RECOMMENDED

The S&P 500 index tumbled 7% on Wednesday, triggering a 15-minute trading halt of Wall Street's main indexes for the second time this week, on fears that stimulus measures may not be enough to avert a coronavirus-driven recession.

Wall Street had bounced in the previous session after the Trump administration pressed for a $1 trillion stimulus package and the Federal Reserve relaunched a plan to buy short-term corporate debt, but the optimism was short-lived with many companies warning of big business impact.

If the S&P 500 falls 13% when trading resumes, it will trigger a level-2 circuit breaker and halt trading again for 15 minutes.

Markets have been incredibly volatile for weeks as Wall Street and the White House acknowledge an increasing risk of a recession due to the coronavirus outbreak. The typical day this month has seen the stock market swing by 4.9%. Over the last decade, the typical move was just 0.4%.

The selling pressure swept markets around the world. Benchmark U.S. oil fell more than 10% and dropped below $24 per barrel for the first time since 2002. European stock indexes lost 5% following broad losses in Asia. Even prices for longer-term U.S. Treasurys, which are seen as some of the safest possible investments, fell as investors flocked to the very shortest-term Treasury debt.

It was just a day ago that the S&P 500 surged 6% after President Donald Trump he’s “going big” in plans to aid an economy that’s increasingly shutting down by the day. The program could approach $1 trillion, and it would follow a spate of emergency actions by the Federal Reserve and other central banks to get financial markets running more smoothly.

Despite all that, investors are struggling with how much to pay for anything – stocks, bonds, oil – when it’s so uncertain how badly the economy is getting hit, how much profit companies will make and how many companies may go into bankruptcy due to a cash crunch.

“These are truly unprecedented events with no adequate historical example with which to precisely anchor our forecast,” Deutsche Bank economists wrote in a report Wednesday.

With all the uncertainty and early evidence that China’s economy was hit much harder by the virus than earlier thought, they now see “a severe global recession occurring in the first half of 2020.”

But they also are still forecasting a relatively quick rebound, with activity beginning to bounce back in the second half of this year in part because of all the aid promised from central banks and governments.

Investors say they need to see the number of infections slow before markets can find a bottom, analysts said. The number of new cases reported in China, where the virus emerged in December, is declining but infections in the U.S., Europe and elsewhere are increasing.

For most people, the coronavirus causes only mild or moderate symptoms, such as fever and cough, and those with mild illness recover in about two weeks. Severe illness including pneumonia can occur, especially in the elderly and people with existing health problems, and recovery could take six weeks in such cases.