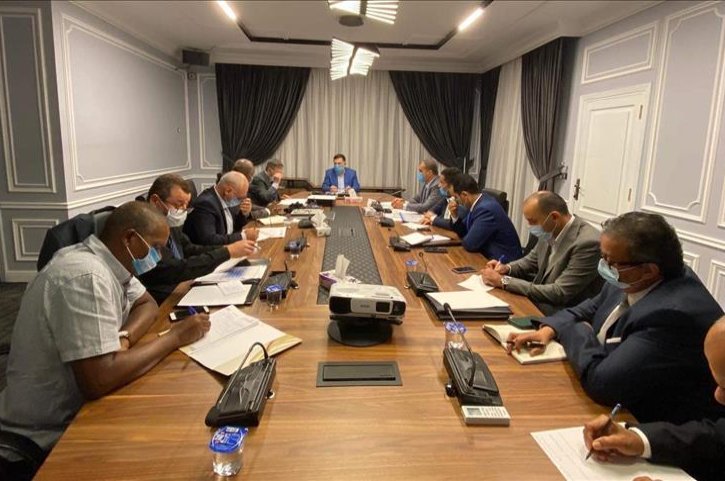 Libyan Prime Minister Fayez Sarraj on Wednesday held discussions with ministers and government officials regarding the return of Turkish companies to the country, according to a statement from a Libyan ministry.

In a meeting with the Planning Minister Taher al-Juhaimi and Libyan central bank officials, Sarraj discussed "issues of resuming projects that were interrupted due to extraordinary conditions and on conducting new projects, especially electricity and energy infrastructure projects with Turkish companies to provide fast and effective service for Libyans."

Sarraj emphasized that resuming unfinished projects with private sector participation would be a start to a balanced relationship between Turkey and Libya.

Before Turkey officially threw its support behind the U.N.-backed Government of National Accord (GNA), led by Sarraj, Turkish builders had worked on dozens of projects in the country. The backlog of Turkish contract work there amounts to $16 billion, a sector official said in January.

According to World Bank data, 97% of Libyans had access to electricity in 2002, while this rate declined steadily and fell to 67% in 2018.

The electricity infrastructure in the country was badly damaged due to the attacks launched by putschist Gen. Khalifa Haftar’s forces in eastern Libya to seize the capital Tripoli in April 2019.

Libya, which has the largest oil reserves in Africa, has been suffering from power cuts of up to eight hours a day in Tripoli, the country's most populous city.

Turkey’s Karadeniz Holding, which runs a fleet of power ships, or floating power generators, is now preparing to provide electricity in Libya.

The company plans to send its team to Libya within weeks and could start supplying power to western Libya within 30 days, Chief Commercial Officer Zeynep Harezi told Reuters on Tuesday.

The Turkish firm specializes in producing and selling electricity from ships anchored off the coast. It sells electricity to more than 10 countries, including Lebanon and several African nations that cannot meet the demand with onshore plants.

The company, which operates 25 floating plants with a combined output of 4,100 megawatts (MW), could supply power through the ports of Tripoli West, al-Khoms and Misrata, Harezi said, adding infrastructure would be assessed so a full proposal could be presented.

Floating power plants plug into electricity grids after berthing. The company says the plants could use Libyan-produced diesel or natural gas, delivering as much as 1,000 megawatt-hours (MWh), ending power cuts in areas supplied via the ports.

The company's plans follow a visit last month by a Turkish delegation, led by Foreign Minister Mevlüt Çavuşoğlu and Treasury and Finance Minister Berat Albayrak, to discuss cooperation in energy, construction and banking.

Ankara has made increasingly clear its ambitions for lasting cooperation with Tripoli on oil exploration, construction, banking and manufacturing after its military support helped the GNA reverse a 15-month offensive.

With Turkish help, the GNA halted an assault on Tripoli and in recent months pushed back Haftar's forces, which is supported by Russia, France, the United Arab Emirates and Egypt.

The oil-rich country has remained beset by turmoil since 2011 when longtime dictator Moammar Gadhafi was ousted and killed in a NATO-backed uprising after four decades in power.

The new government was founded in 2015 under a U.N.-led agreement, but efforts for a long-term political settlement failed due to a military offensive by Haftar's forces.