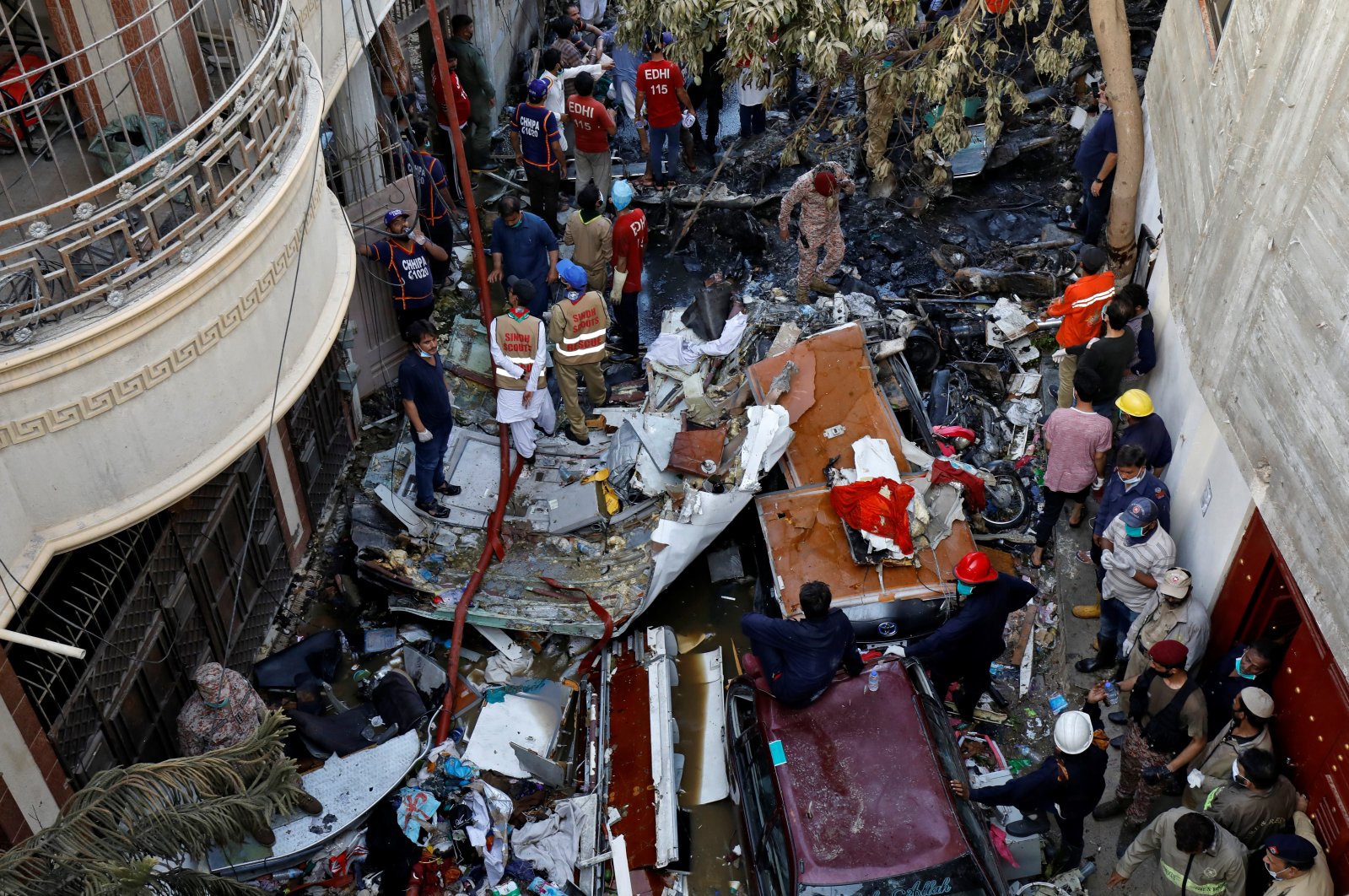 Rescue workers gather at the site of a passenger plane crash in a residential area near an airport in Karachi, Pakistan, May 22, 2020. (Reuters Photo)
by Daily Sabah with Wires Jun 10, 2020 3:42 pm
RECOMMENDED

Pakistan on Wednesday said it had sought technical assistance from Turkey's flag air carrier in an ongoing investigation into a plane crash that killed 98 people in the southern port city of Karachi last month.

Aviation Minister Ghulam Sarwar Khan said in parliament that a "senior pilot" from Turkish Airlines would soon join the investigators to ascertain if the crash was the result of technical or human error on the part of the plane's pilot, local broadcaster Geo News reported.

"We've requested from Turkish Airlines the services of a senior pilot in the ongoing investigation. He will soon join that (investigation)," Khan said.

On May 22, a Pakistan International Airlines (PIA) Airbus traveling from the northeastern city of Lahore crashed into a residential area near Jinnah International Airport while trying to land after the pilots reported the loss of both engines.

It had 99 passengers and crew on board. Some 97 passengers and a girl on the ground were killed in the crash, while two survived. Among the passengers were 20 women and three children, several army officers and senior journalist Ansar Naqvi.

Prime Minister Imran Khan formed a four-member committee to investigate the crash – the second since 2016.

Initial reports suggested the plane scraped its engines along the runway on a first attempt to land following what appeared to be an unstable approach, arriving steep and fast.

European plane-maker Airbus has also initiated an investigation into the crash. An 11-member team of Airbus experts and engineers visited the crash site last month and collected evidence.

In a letter sent to PIA, the Civil Aviation Authority said an approach controller twice told the pilot to discontinue its approach as he came into land, but he did not comply.

As it neared the landing, the plane’s ground speed was above the runway threshold, the letter quoted the controller as saying.

It lifted up from the runway surface and crashed over Model Colony while attempting a second approach, the letter said.

The plane’s cockpit voice recorder and flight data box are being decoded in France by French air accident agency BEA.

Pakistan’s Aviation Minister Ghulam Sarwar Khan has said that an initial report on the crash will be presented to parliament on June 22.

Aviation safety experts say air crashes typically have multiple causes, and it is too early to determine the reasons behind the air disaster, which is Pakistan’s worst since 2012.