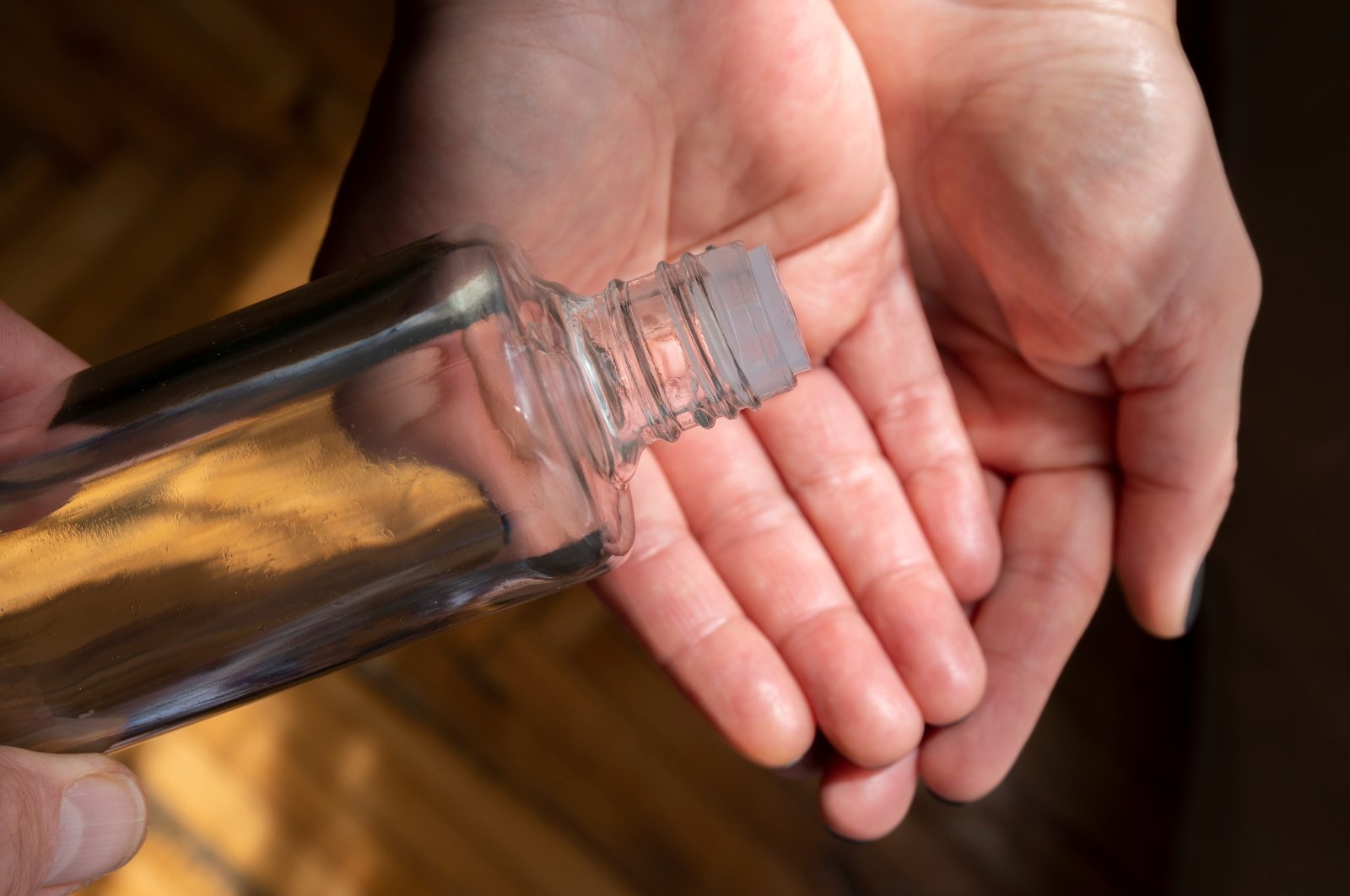 A person disinfects their hands with traditional Turkish cologne, aka "kolonya." (Shutterstock Photo)
by Anadolu Agency Feb 20, 2021 11:01 am
RECOMMENDED

Annual exports of Turkey's traditional cologne, a powerful disinfectant used by many to ward off the threat of coronavirus, tripled in 2020.

Turkey exported 6.9 million tons of cologne last year, up from 2.4 million in 2019, according to data compiled by Anadolu Agency (AA) from the Istanbul Chemical and Chemical Products Exporters' Association (IKMIB).

A deep-rooted custom of Turkish hospitality, cologne, known as "kolonya," gained popularity for its refreshing scent as well as its high alcohol content, which can kill off more than 80% of germs. Kolonya shouldn't be confused with cologne which in Western countries stands for a type of male perfume.

The country reaped $28.3 million through cologne exports in 2020, more than three times the $9.1 million it earned in 2019, according to IKMIB data.

Germany, the Netherlands, Iraq, the U.S., and the U.K. were the top recipient of Turkish traditional cologne exports, with a 60% total share last year.

In Turkish tradition, cologne is offered as a refreshing fragrance in various social situations: after a haircut, on a bus ride, after a trip, when guests arrive, or when visiting a sick friend.

Engin Tuncer, the owner of leading Turkish cologne producer Eyüp Sabri Tuncer, said that despite virus-related glitches in logistics and supply chains, production and trading of cologne went on uninterrupted.

"During the pandemic, we got great demand for traditional Turkish cologne from new export markets, beside our existing international buyers," said Tuncer.

Tuncer stressed that the century-old firm expanded its production capacity to meet soaring demand, especially for colognes with a distinctive citrus scent.

"With the new investments we made during this period, we tripled our output, and our store and internet sales jumped sixfold," he explained.

The company, along with its sub-brands, exports to nearly 70 countries.

Pointing out how cologne became a strategic tool for warding off the risk of coronavirus, Tuncer said the company added new markets to its export portfolio.

"We saw a huge rise in demand from countries that don't (traditionally) have the habit of using cologne, such as Japan, Korea, Taiwan, Singapore, Malaysia, and China, where we won a foothold with our personal care products," Tuncer stressed.

The company is set to accelerate investments by boosting its capacity and adding new production lines, he explained.

"I believe that in 2021 we'll cement our successful results from last year thanks to the cologne-using habit of our target audience abroad," he said.

Since emerging in December 2019, the COVID-19 pandemic has claimed more than 2.52 million lives in 192 countries and regions.

According to figures compiled by the U.S.-based Johns Hopkins University, nearly 111 million cases have been reported worldwide, with recoveries now more than 62 million.