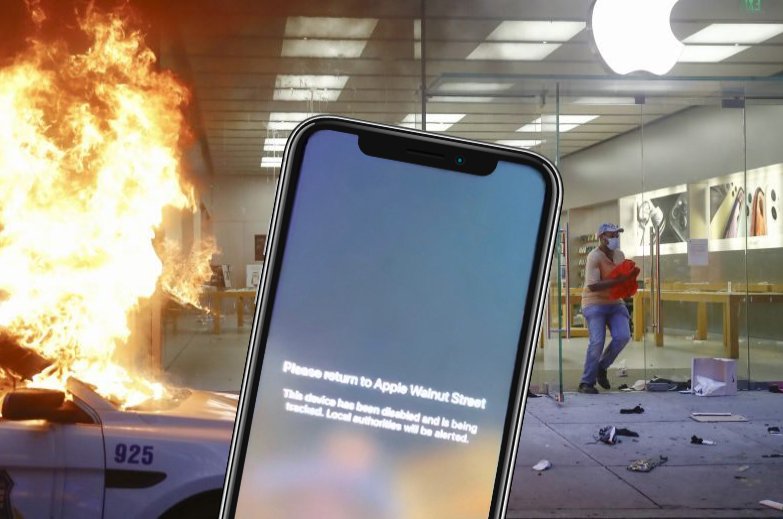 A looter leaves the Apple Store as a police car burns during the Justice for George Floyd Philadelphia Protest in Philadelphia, May 30, 2020. (AP Photo)
by Daily Sabah with Wires
Jun 01, 2020 3:22 pm

As looters all over the U.S. took advantage of the riots over killing of George Floyd in Minneapolis police custody, Apple Stores were a primary target as the Cupertino giant’s products are in hot demand with a very high resale value.

Well, things did not go so well for the looters.

A social media post showed on Monday that Apple took the upper hand to lock the stolen devices for good.

“Please return to Apple Walnut Street,” a warning on the screen of the looted iPhone shown in the Twitter post reads.

“This device has been disabled and is being tracked. Local authorities will be alerted,” the warning concludes.

Another night of unrest in every corner of the country left charred and shattered landscapes in dozens of American cities Sunday as years of festering frustrations over the mistreatment of African Americans at the hands of police boiled over in expressions of rage met with tear gas and rubber bullets.

Cars and businesses were torched, the words “I can’t breathe” were spray-painted all over buildings, a fire in a trash bin burned near the gates of the White House and thousands marched peacefully through city streets to protest the death of Floyd, a black man who died Monday after a white Minneapolis police officer pressed his knee on his neck until he stopped breathing.

His death is one of a litany of racial tragedies that have thrown the country into chaos amid the coronavirus pandemic that has left millions out of work and killed more than 100,000 people in the U.S., including disproportionate numbers of black people.