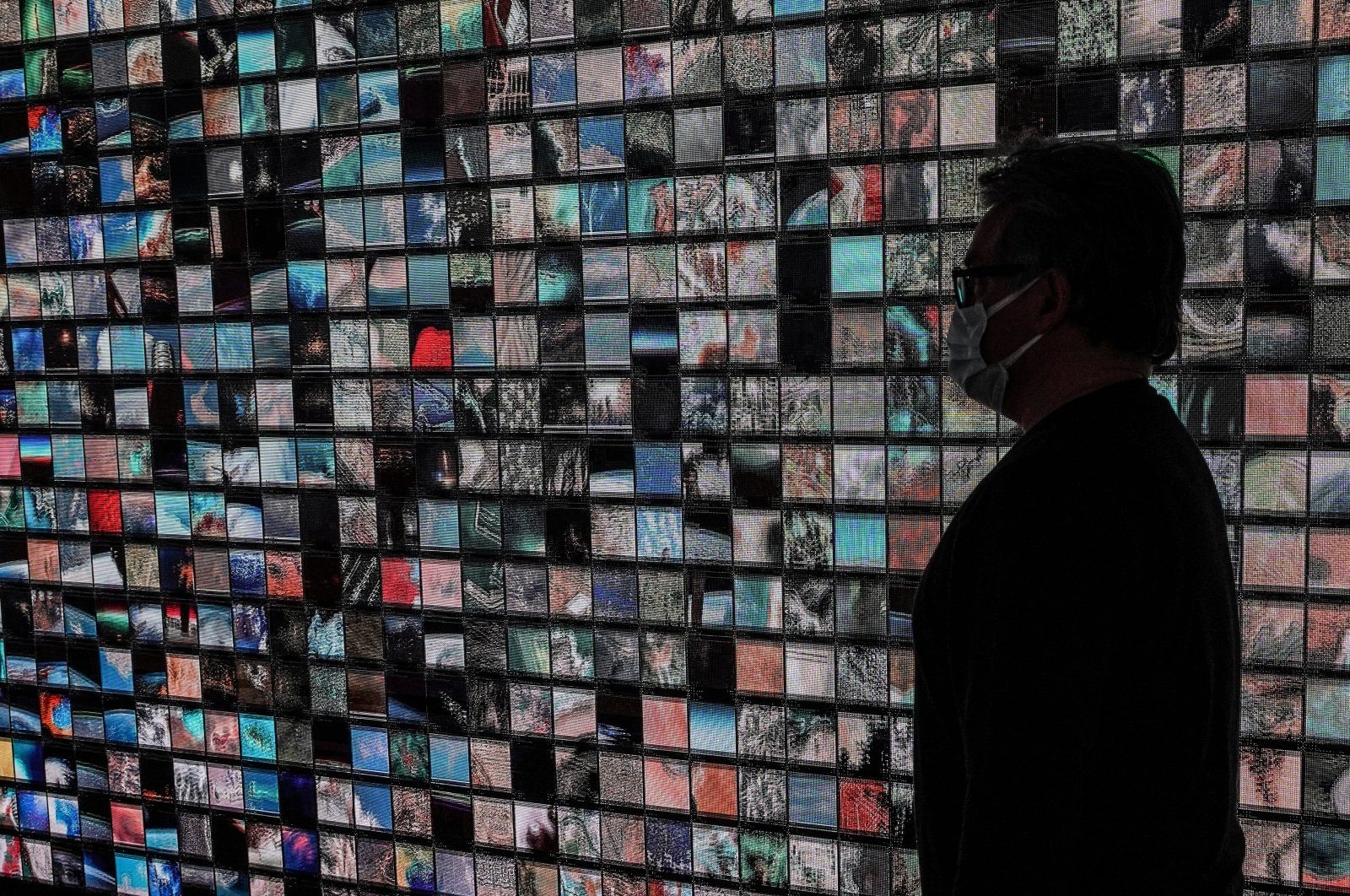 Working only with public data, Turkish artist Refik Anadol, paints artificial intelligence brushstrokes with GAN algorithms in the form of fluid dynamics in spaces and sculptures

Human beings, who live by the day and make decisions instantly, have become increasingly dependent on algorithms during the pandemic as machines turn all their inclinations into predictions.

Artist Refik Anadol has brought a different artistic interpretation to this addiction with his “Machine Memories: Space” art exhibition, which has recently opened in the Turkish metropolis of Istanbul.

Anadol’s solo exhibition has also attracted the great attention of giant technology companies around the world.

The manager of the Massachusetts Institute of Technology (MIT) Media Lab, which I visited many years ago at the invitation of Turkey’s leading information and communication technologies company Türk Telekom, described the success criteria as “making an impact.”

On the fourth floor, the exhibition takes art enthusiasts on a journey with data of different forms. On the lowest floor, images and colors flow as if they are moving within a data tunnel. Then, on the top floor, you meet the origins of the story of the journey.

In more than 3 million photos, you are introduced to the forms in which Refik Anadolu paints the memories of machines that learned the surface of Mars with artificial intelligence (AI) brushstrokes in the form of fluid dynamics.

He treats images obtained from telescopes used by scientists to explore space with data as “machines’ memories.”

There are some details that Anadol underlines in each of his exhibitions. Primarily, he uses only public data, not personal data. While declaring the sources of the algorithms used with his audiences he also shares his discoveries via GAN algorithms through the AI journey with artistic forms in the form of fluid dynamics.

It is exciting that an artist from Turkey is inspiring people with sculptures from data at the heart of technology. It is even more exciting to imagine more of his works exhibited in the public sphere in Turkey. I imagine Anadol’s data sculpture in front of the renovated Atatürk Cultural Center. I want many areas of my country to be decorated with the works of such talented artists.

The story of Anadol, who imagines that the machines have memories, begins with his friend architect Alper Derinboğaz after they converted Beyoğlu’s 72-hour audio recordings into 3-D data sculpture.

Anadol says this is the first experience of mechanization and sculpturing of data, imagining that machines, such as people who closed their homes with the pandemic and made new waves in the seas of data, also have memories. And he does it with the imagination of machines exploring space.

Anadol combines the brushstrokes of AI with its own algorithms and creates brand new artistic forms. He does so in the spirit of a curious, passionate child who continues to learn.

During our chat at the opening of the “Machine Memoirs: Space” exhibition at the Pilevneli Art Gallery, Anadol stressed that data itself is not boring numbers, but a memory.

“I started working with data on a very different scale. Later, a collector in Boston who collected my works requested a moving picture. This turned into a very beautiful inspiration. It was formed by data consisting of wind data, i.e., the pressure of the air, the direction and speed of the wind,” he said.

Data sculpture trails have changed a lot, Anadol continues, as he explains his work.

“At the entrance to the Sales Force building in San Francisco, there is a 3-D data sculpture created using the public data of the municipality of San Francisco for nearly 20 years. These projects began to evolve afterward. These evolved slowly. We have done different projects in places such as large hotels, buildings, public institutions, airports,” he noted.

Then in 2016, he said the business changed a little bit.

“Business instantly changed with the invitation of Google’s Artists and Machine Intelligence Group (AMI),” he noted. "It is not a far-fetched idea for science fiction lovers that machines can dream, remember, learn, but five years ago it was practically impossible to do. Thus came the experience of using artificial intelligence practically. Data began to turn into not only numbers and memories, but also objects that could travel towards consciousness in the mind of the machine,” Anadol explained.

For the last five years, Anadol said he has been experimenting to learn the future in a much more ethically positive sense, “if we can make the machine a human, rather than making human a machine by combining artificial intelligence, architecture and neuroscience.”

The number of our shadows is increasing. Our lives started to pass between two machines. We see machines day in and day out. The food we eat, the music we listen to, the movies we watch begin to be just the analysis, estimations of the machines. In this world, randomness decreases.

This is how I interpret the situation, however, we are in great need of machines. We have magnetic resonance imaging (MRI) scans, mobile phones, microscopes, telescopes, research-oriented machines. In fact, human beings are always in need of machines whether at the macro or micro levels. It gives me fear as if we were going into a boring reality. If a machine can learn, another very exciting journey begins under the question of whether it can dream. This is where the data dream begins to inspire.

Giving information about the exhibition, Anadol went on to say that when the ego and data of three valuable telescopes in this exhibition is separated, the work becomes meaningful.

We ask questions like, “Is Mars the second planet we're going to go to? Are there any alternative planets that the Hubble telescope can see?”

Anadol said on his dream that it is “asking what is not asked, seeing the invisible, trying to create a new method of inspiration.”

“While doing this, to reveal a new imagination method with the cognitive elements that form human beings such as remembering, dreaming. Maybe this will give us more insight into the near future that we cannot see. I think it will reveal the chance to turn data into objects that can be really useful for people, rather than being a boring product."

When we say artificial intelligence, we are talking about a certain memory and data. It exists within the framework of the data. So, it turns into a learning experiment in reality. But, for example, there is a gap between a baby growing up and making sense of his experiences and AI learning and staying within its limits.

Imagination can teach us a lot if we think of it as a controlled experiment. The algorithms in this exhibition also show the unseen to Nasa JPL engineers we've worked with for three years. Think about it, you have more than 3 million photographs of the surface of Mars in your hand. It takes you years to learn it. It may take years to even look at them and it is not certain how much you can learn from them, while, we have a machine to do that and it will not forget.

Algorithm turns into a brushstroke

While describing himself, Anadol said about ethical public data, resource information and GAN algorithms: “For me, art should reach every person, every culture, every age. This started for me with art in the public sphere. I am talking about collective memories, nature, space and data where everyone can find meaning and significance. Therefore, I think art in the public sphere becomes more honest and more meaningful when it is done with public data. This is my ethical concern.”

Therefore, he said he does not do business with personal data. “I do not want to do either. Anyone can download any Nasa JPL data in this exhibition. Downloading 12 terabytes of data is not easy, but it is available to everyone. For the last five years, I have honestly shared the name of the algorithm and how it is used in every exhibition in every project. I think this attitude creates resources for people to wonder, research and inspire. About the GAN algorithms, I met Ian Goodfellow, a Google researcher who invented GAN algorithms in 2016. It was a very useful conversation. Since then, I’m thinking that if I was to have an artist-thinking brush, one day it made sense to have a GAN algorithm. As an artist, if I wanted to dye that brush in the mind of the machine and paint with a machine consciousness, in fact, that algorithm suggested a very accurate description. In this study, we see the modified algorithm developed by the NVIDIA company with the GAN algorithm. For the last four years, they have been supporting us a lot in terms of software and hardware as a team. We use these algorithms by reintegrating them, developing them and rerunning them. Though the algorithm changes until it comes to the exhibition as a final stage, the viewer can see every stage from the links above. From the shared links, everyone can see our starting point and final stage.”

Anadol said that the data is localized, sculpted, pictured, and this is an artistic and cognitive imagination.

“It's a different world. Machine consciousness doesn't seem like a very rigid thing to me. Our consciousness doesn't feel like that either. I made an association there for the last six to seven years. Whenever there is an artificial intelligence algorithm, I definitely try to interpret the movements in the mind of the machine together with the fluid dynamics by combining the machine decisions with the optical flow algorithm. In this exhibition, the audience will be able to experience different versions.”