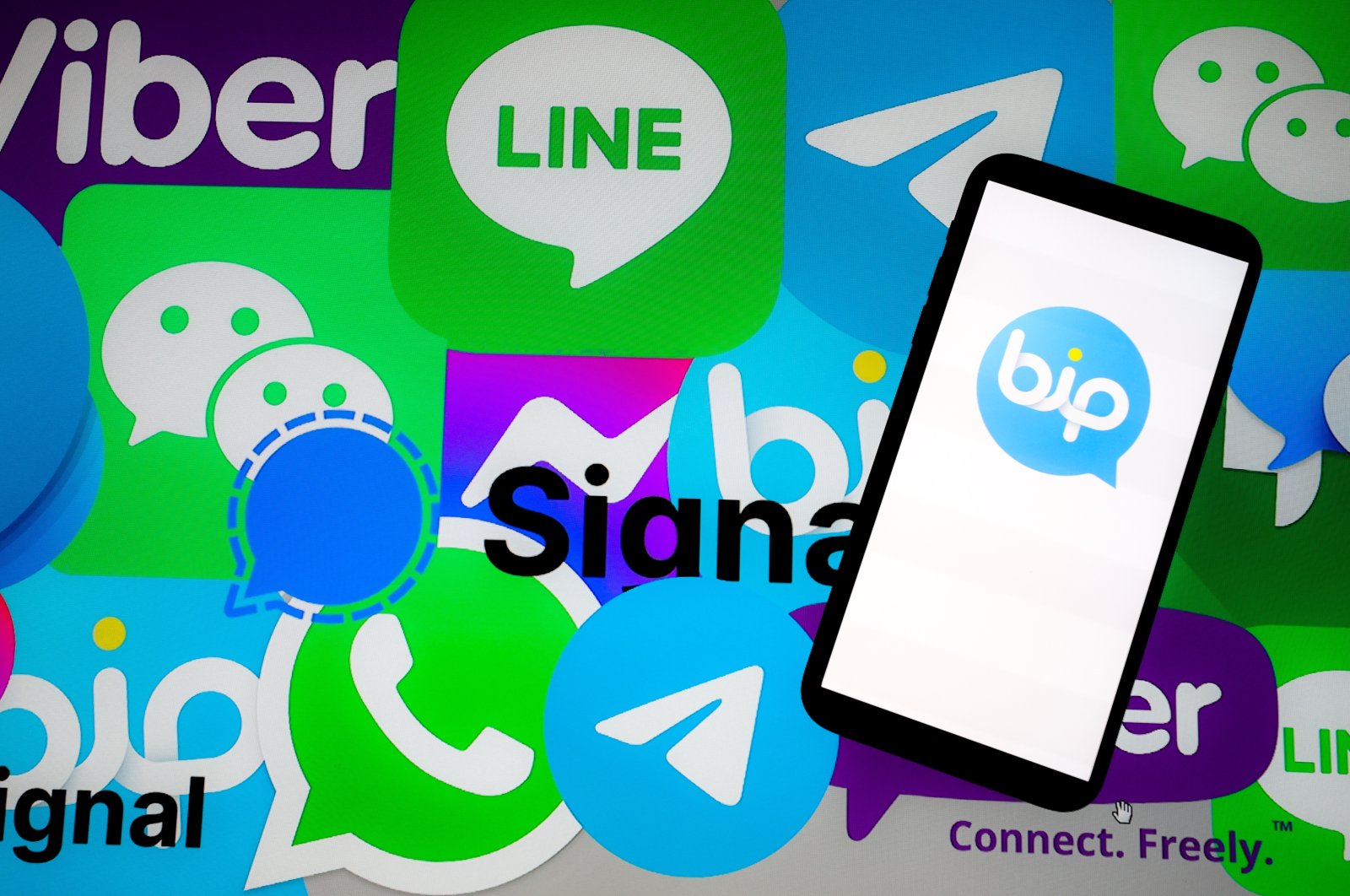 The logo of the Turkish messaging app BiP and other apps are seen in this Anadolu Agency illustration created on Jan. 10, 2021. (AA Photo)
by DAILY SABAH WITH AA Jan 17, 2021 1:11 pm
RECOMMENDED

Turkish communication and messaging app BiP jumped to the top of the users’ list in Bangladesh in the wake of widespread concerns over WhatsApp’s update to its privacy policy.

Developed by Turkish mobile phone operator Turkcell, BiP currently holds the top position in Bangladesh among the top messaging apps for Android, according to one of the world’s leading app store optimization and mobile app intelligence platforms, MobileAction.

It placed WhatsApp second in Bangladesh, while imo, Facebook Messenger and Telegram Messenger are trailing.

Smartphone users in the South Asian delta state are downloading BiP in great numbers and talking about it on social media.

Youngsters are claiming that BiP is a fantastic app launched by Turkey under the leadership of President Recep Tayyip Erdoğan.

Dhaka-based journalist Aoulad Hossain applauded the app and told Anadolu Agency (AA): “I think using the BiP app is safer than WhatsApp as the authority of the app has assured that they will keep all the information of the users secured.”

The surge in downloads of the Turkish app has gained worldwide momentum after WhatsApp, boasting more than 2 billion users, recently introduced controversial changes to its privacy policy that allows it to share more data with parent company Facebook.

Around 2 million users on average were installing the Turkish app per day last week, with the figure eclipsing download numbers prior to Jan. 6, the day WhatsApp updated its privacy terms.

More than 10 million people have switched to BiP since Jan. 6 as of Thursday. The number of people downloading the app worldwide has crossed 60 million.

Operators of Global System for Mobile Communications (GSM) in Turkey – Turkcell, Türk Telekom and Vodafone – joined hands for local messaging app BiP and have since experienced a massive global response.

The response to BiP in Bangladesh appears to be among the top in the world, especially since youngsters in the Muslim-majority country started to download the app and call it “their app.”

“I like brave Turkish leader Erdoğan. So, I’ve downloaded the Turkish app as my app and I’ll use it randomly from now on.”

Praising Turkey’s initiative, an IT employee at a private firm in Dhaka said BiP needs to add more features like status and theme options. “You have to know why people use WhatsApp and must introduce all those features and add some more to attract users,” said Rakibul Islam.

At present, nearly 110 million people in Bangladesh use mobile devices and one-quarter use smartphones and enjoy the internet along with different messaging apps, according to data from the Bangladesh Telecommunication Regulatory Commission and media reports.

“If the current trend of downloading BiP continues in Bangladesh, within a few weeks, users of the app will be in the millions,” Islam said.

BiP describes itself as a secure, easy-to-use, free communication and life platform, which offers seamless communication and a wide range of utility features such as instant translations to 106 languages and exchange rates.

It allows users on mobile devices and the web to make video and audio calls with up to 10 people simultaneously around the world and share images, videos and locations.

Zerina Begum, a professor at the Information Technology Institute of Dhaka University, characterized the excitement in Bangladesh and the rest of the world surrounding BiP as common human nature.

Telling AA that users naturally feel interested in anything new, Begum said: “So, the newly introduced BiP has attracted the attention of people and the vacuum developed by the controversial move of WhatsApp has played a significant role to boost the app,” she added.

Underlining the sentiments of Bangladeshis, she said many in the country like Turkey and Erdoğan, helping to further boost the app in the South Asian country.

She urged BiP officials, however, not to compromise the privacy of users and the faith they have entrusted them.