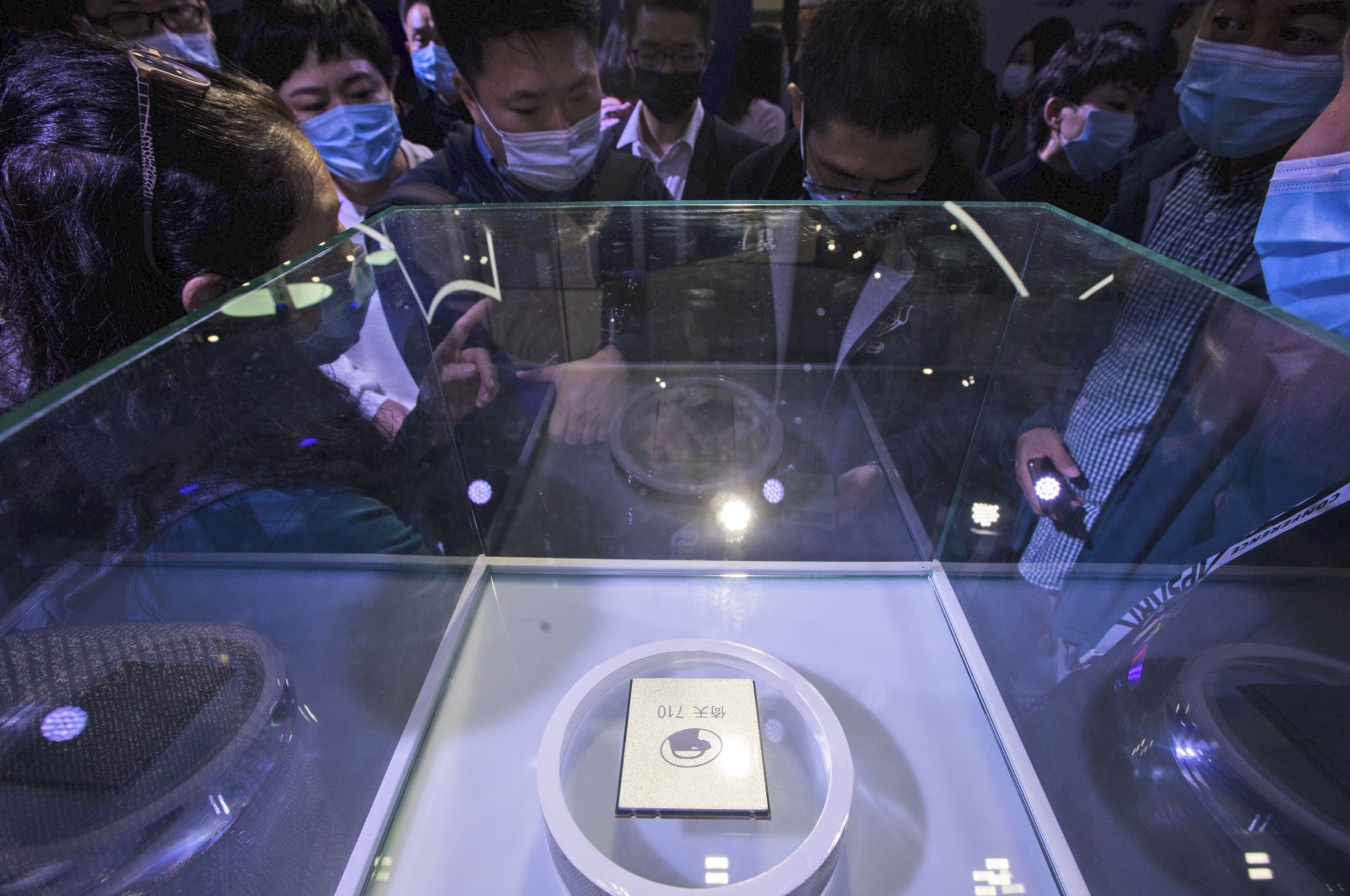 To help make China a self-reliant “technology superpower,” the ruling Communist Party is pushing the world's biggest e-commerce company to take on the tricky, expensive business of designing its own processor chips – a business unlike anything Alibaba Group has done before.

Its 3-year-old chip unit, T-Head, unveiled its third processor in October, the Yitian 710 for Alibaba's cloud computing business. Alibaba says for now, it has no plans to sell the chip to outsiders.

Other rookie chip developers including Tencent, a games and social media giant, and smartphone brand Xiaomi are pledging billions of dollars in line with official plans to create computing, clean energy and other technology that can build China’s wealth and global influence.

Processor chips play an increasingly critical role in products from smartphones and cars to medical devices and home appliances. Shortages due to the coronavirus pandemic are disrupting global manufacturing and adding to worries about supplies.

Chips are a top priority in the ruling Communist Party's marathon campaign to end China's reliance on technology from the United States, Japan and other suppliers Beijing sees as potential economic and strategic rivals. If it succeeds, business and political leaders warn that might slow down innovation, disrupt global trade and make the world poorer.

“Self-reliance is the foundation for the Chinese nation,” President Xi Jinping said in a speech released in March. He called for China to become a “technology superpower” to safeguard “national economic security.”

“We must strive to become the world’s main center of science and the high ground of innovation,” Xi said.

Beijing might be chasing a costly disappointment. Even with huge official investments, businesspeople and analysts say chipmakers and other companies will struggle to compete if they detach from global suppliers of advanced components and technology – a goal no other country is pursuing.

“It’s hard to imagine any one country rebuilding all of that and having the best technology,” said Peter Hanbury, who follows the industry for Bain & Co.

Beijing’s campaign is adding to tension with Washington and Europe, which see China as a strategic competitor and complain it steals technology. They limit access to tools needed to improve its industries.

If the world were to decouple, or split into markets with incompatible standards and products, U.S.- or European-made parts might not work in Chinese computers or cars. Smartphone makers who have a single dominant global operating system and two network standards might need to make unique versions for different markets. That could slow down development.

Official urgency over that grew after Huawei Technologies Ltd., China’s first global tech brand, lost access to U.S. chips and other technology in 2018 under sanctions imposed by the White House.

That crippled the telecom equipment maker’s ambition to be a leader in next-generation smartphones. American officials say Huawei is a security risk and might aid Chinese spying, an accusation the company denies.

Huawei and some Chinese rivals are close to matching Intel Corp., Qualcomm Inc., South Korea’s Samsung Electronics and Britain’s Arm Ltd. at being able to design “bleeding edge” logic chips for smartphones, according to industry analysts.

But when it comes to making them, foundries such as state-owned SMIC in Shanghai are up to a decade behind industry leaders including TSMC, or Taiwan Semiconductor Manufacturing Corp., which produces chips for Apple Inc. and other global brands.

Even companies such as Alibaba that can design chips likely will need Taiwanese or other foreign foundries to make them. Alibaba's Yitian 710 requires precision no Chinese foundry can achieve. The company declined to say which foreign producer it will use.

China accounts for 23% of global chip production capacity but only 7.6% of sales.

Packing millions of transistors onto a fingernail-size sliver of silicon requires some 1,500 steps, microscopic precision and arcane technologies owned by a handful of U.S., European, Japanese and other suppliers.

They include KLA Corp. in California for super-precise measurement and Japan’s TEL for machines to apply coatings a few molecules thick. Many are covered by restrictions on “dual use” technologies that can be used in weapons.

China “lags significantly” in tools, materials and production technology, the Semiconductor Industry Association said in a report this year.

Without those, China is falling farther behind, said Bain’s Hanbury.

“The TSMC horse is sprinting away and the Chinese horse is stopped,” he said. “They can’t move forward.”

Washington stepped up pressure on Huawei last year by barring global foundries from using American technology to produce its chips. U.S. vendors can sell chips to the company, but not for next-generation “5G” smartphones.

For its part, the European Union said it will review foreign investments after complaints China was eroding Europe’s technology lead by purchasing important assets such as German robot maker Kuka.

T-Head’s first chip, the Hanguang 800, was announced in 2019 for artificial intelligence. Its second, the XuanTie 910, is for self-driving cars and other functions.

Beijing says it will spend $150 billion from 2014 through 2030 to develop its chip industry, but even that is a fraction of what global leaders invest. TSMC plans to spend $100 billion in the next three years on research and manufacturing.

China is trying to buy experience by hiring engineers from TSMC and other Taiwanese producers. Taiwan, which Beijing claims as part of its territory and has threatened to attack, has responded by imposing curbs on job advertising.

Beijing encourages smartphone and other manufacturers to use suppliers within China, even if they cost more, but officials deny China wants to detach from global industries.

“We will never go back in history by seeking to decouple,” Xi said in a speech by video link to a November meeting of Asia-Pacific leaders in Malaysia.

The latest conflict is over photolithography, which uses ultraviolet light to etch circuits into silicon on a scale measured in nanometers, or billionths of a meter.

The leader is ASML in the Netherlands, which makes machines that can etch transistors just 5 nanometers apart. That would pack 2 million into a space one centimeter wide.

China’s SMIC is about one-third as precise at 14 nanometers. Taiwan’s TSMC is preparing to increase its precision to 2 nanometers.

SMIC wants to upgrade by purchasing ASML’s latest machine, but the Dutch government has yet to agree.

“We will wait for their decision,” said an ASML spokesperson, Monica Mols, in an email.