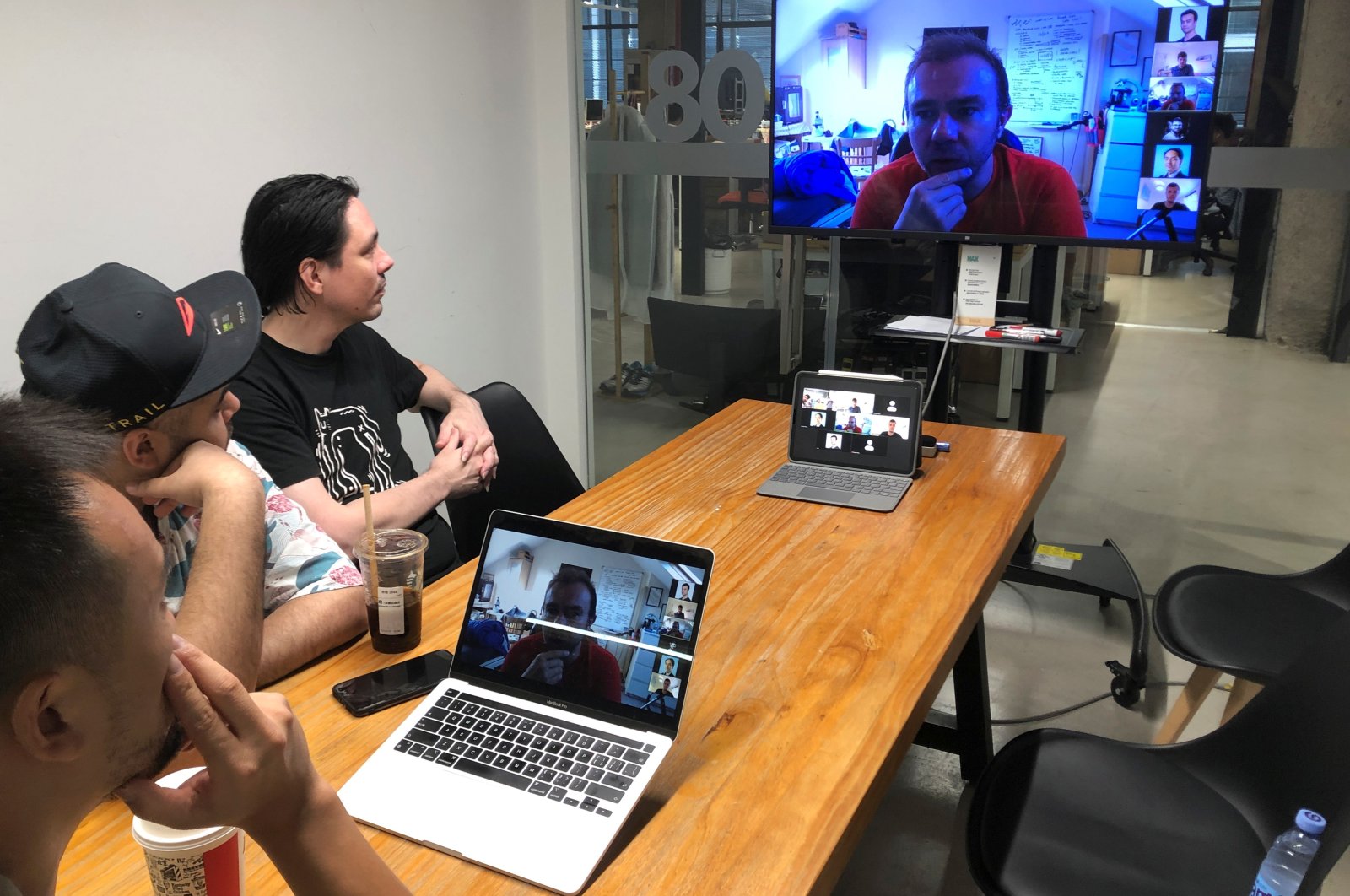 Hax's engineers discuss a prototype with the team from Unicorn Bio over a video call amid the global coronavirus pandemic, from their office at Huaqiangbei electronics market in Shenzhen, Guangdong province, China, July 16, 2021. (Reuters Photo)
by REUTERS Aug 05, 2021 10:08 am
RECOMMENDED

China's COVID-19 border closures have paralyzed the movement between Shenzhen, a free-wheeling tech hub built on the country's early efforts to open itself to the world and the overseas business relations, throwing a spanner in the rapid cycles of product development that power the hardware center.

Now, like most people working from home, an engineering team is prototyping a bioreactor that will one day produce "cultivated meat," discussing component sizes in a video call with scientists sitting in kitchens and bedrooms in the U.K. from an office in Shenzhen's sprawling electronics district.

It's a complicated conversation about precision parts that would ordinarily need a hands-on meeting in Shenzhen where product makers can buy and tinker with any gear they need.

Hax, the firm backing the bioreactor, invests in more than 30 such hardware startups from overseas each year and would typically fly them to Shenzhen to build their products.

"We'd normally just jam with teams under one roof, rolling up our sleeves and getting involved in the electronics and chemicals, but we had to find a different way of working with teams," said Ke Ji, a China-born mechanical engineer and Canadian citizen who is Hax's program director.

Without that international bustle, it is now mostly domestic staff and startups using the immersion tanks, humidity chambers and other obscure items in Hax's spacious office in Shenzhen's Huaqiangbei, the world's largest electronics market.

Hax's engineers now spend afternoons and evenings in calls with teams in North America and Europe, scrambling to source components to ship across the world, instead of teaching their startups how to do it.

While Hax leadership says the challenges of remote design are not insurmountable, they have presented clear roadblocks for others.

In February, he was forced to vacate his shared office when his partner could no longer afford it.

Now, Werner is preparing an incubator at a new location with Chinese partners in hopes of bringing in local startups and expanding when borders finally reopen.

He remains optimistic. "People are lining up to come back," he said.

China's low case numbers have helped its economy recover briskly from the outbreak, but the shutdown of most inbound travel has devastated businesses such as international schools in need of teachers, e-commerce consultants and supply chain managers.

The airport in Guangzhou, about 100 kilometers (62 miles) from Shenzhen, saw just 56,000 international arrivals and departures in June, very few of them foreigners and well down from 1.5 million in January 2020, before lockdowns began.

With the fresh outbreak of the delta variant, China is now widely expected to maintain the strict border policies that have seen it shut off from the world since early last year.

In Guangdong, where Shenzhen is located and generally regarded as a pragmatic, business-minded province, authorities are keen to get on with overseas trade.

Guangzhou, the provincial capital, is planning a 5,000-capacity quarantine center to ease the burden on regular hotels, which many hope will allow more foreigners to enter China.

But any plans to reopen will depend in part on conditions beyond China's control.

"If the pandemic is not well controlled in other countries, then the gates can never be opened," said epidemiologist Zhong Nanshan at a press conference announcing the quarantine center in June.

That would be a hard blow for Shenzhen, which, just across the border from Hong Kong, has built a cosmopolitan economy on the international movement of goods, talent and money and was praised by President Xi Jinping as a model Chinese city.

Sabrina Qi opened her bar Gecko in December in Shenzhen's Shekou area, popular with expatriates, gambling on a low rent offer after the virus hit traffic.

Across the street sits a shuttered Indian restaurant next to a locked-up Irish bar plastered with notices about labor disputes with unpaid staff.

"We've found many foreigners have left. We've made losses for the first six months," said Qi.

For foreign consulates that once brought in business delegations, much of the work has moved online and focuses on helping companies already in China.

"But the pipeline of bringing people out, having an exploratory visit and meeting a few contacts, coming back and setting up an office, it's that middle section that you're not getting," said a diplomat based in southern China.

A European Chamber of Commerce survey in June found travel restrictions affected almost three-quarters of respondents, with many stranded employees "simply giving up" on returning to China.

U.S. citizen Francis Bea, founder of cross-border marketing company Eleven International, is working China business hours from the United States, eight months after reapplying for a visa. His tech-sector clients, used to face-to-face meetings at short notice, and are pressing him to return.

"I'm preparing alternatives to returning because I know the chance could be 50-50 for me," said Bea, who may hire more local staff.

For Hax, the biggest challenge is keeping a sense of community when people are dispersed across the internet.

"It'd be a struggle to do this anywhere else besides Shenzhen. If you do happen to find a part elsewhere, it's normally from here anyway," said Ke.