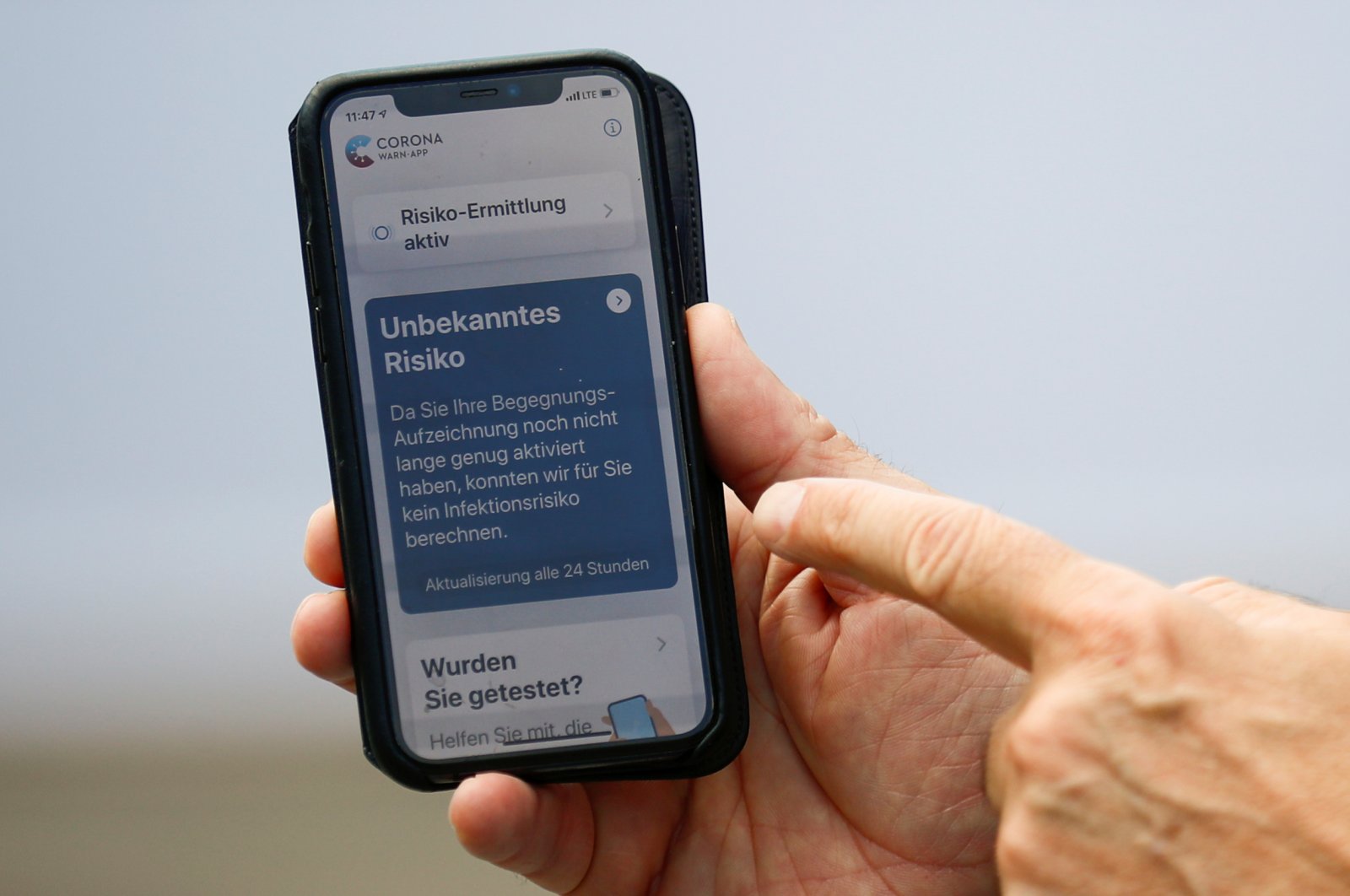 Timotheus Hoettges, chief executive officer of Germany's telecommunications giant Deutsche Telekom AG, shows on his phone the new contact-tracing smartphone app that will use Bluetooth short-range radio and technology standards from Apple and Google to alert people of the risk of infection with the coronavirus, Berlin, June 16, 2020. (AFP Photo)
by Compiled from Wire Services Jun 16, 2020 3:36 pm
RECOMMENDED

Germany sought to mobilize the public on Tuesday to download a new smartphone app that seeks to help break the chain of coronavirus infections, one of several such apps in Europe that governments hope will revive travel and tourism.

The new Corona-Warn-App, which became available for download on Apple and Android phones overnight, uses Bluetooth short-range radio to monitor close contacts between people and issue a warning should one of them test positive.

"Everyone who downloads the app and everyone who encourages friends to do so is making a difference," Health Minister Jens Spahn told ZDF public television ahead of a launch event in Berlin.

Germany follows European countries like Italy, Poland and Switzerland in launching an app based on technology from Apple and Alphabet's Google that protects privacy by storing Bluetooth logs securely on devices.

Helge Braun, Chancellor Angela Merkel's chief of staff, said that the German track-and-trace app, the use of which is voluntary, was not the first of its kind but the best in terms of privacy and data protection.

He called on members of the public to download the app – developed by the government, the Robert Koch Institute (RKI) for disease control and several private companies – saying that "downloading and using it is a small step for each of us, but a large step in the fight against the pandemic."

"The quality of the app is at a very high level, and thus the app also meets the highest standards when it comes to data protection," Interior Minister Horst Seehofer said.

The project nearly went off the rails in April as Berlin abandoned an initial approach that stored data on a central server – which privacy experts said could allow people's relationships to be spied on.

The debate surrounding coronavirus tracing apps was gathering pace on Tuesday, with rights group Amnesty International warned that some countries in Europe and the Middle East were putting hundreds of thousands of people's security at risk.

Still, public enthusiasm for the app is moderate – last week's Politbarometer opinion poll for ZDF found that 42% of people said they would download it and 46% said they would not, while 8% did not have a smartphone.

Millions of downloads will be needed to increase the chance of both people in a risk event having the app, but officials have backed away from earlier aspirations to reach as much as 60% of the population.

Downloading the Corona-Warn-App is easy enough on an iPhone, although some people may be deterred by the need to upgrade first to the latest version of the iOS operating system.