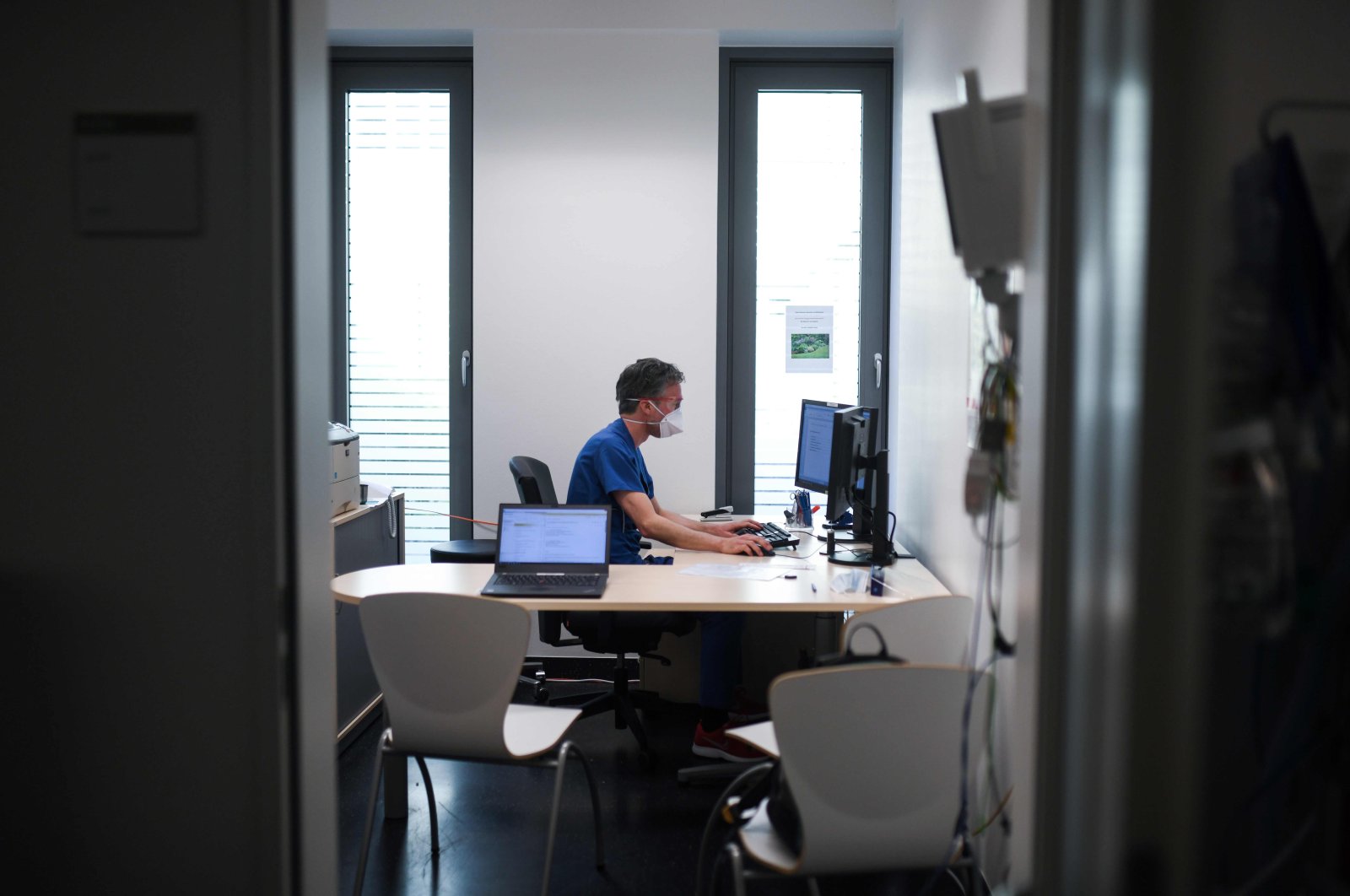 Doctor David Fistera works in his office at the central reception center for corona cases at the University hospital in Essen, western Germany, on March 26, 2020. (AFP Photo)
by Şule Güner Mar 31, 2020 10:49 am

With our increased reliance on all things digital during the coronavirus pandemic, cybersecurity matters more than ever. Artificial intelligence is also proving it can be instrumental in this process. Here are some of the most recent developments on the tech front – both inside and outside of Turkey

The whole world is currently trying to understand the origin of the new type of coronavirus, the SARS-CoV-2, and all entities are struggling to find an answer to how COVID-19, the disease caused by the virus, progresses, learn the stages of the virus' transmission to people and develop a drug that will relieve all humanity.

Many countries are in a race to be the one to do so. The White House also wants to take part in this race by reviewing more than 29,000 documents and articles in the U.S. archives to find an answer to key questions about the coronavirus. In mid-March, Reuters reported that the White House Office of Science and Technology Policy (OSTP) asked Microsoft and Google to compile the most extensive database to date of scholarly articles about the virus and make it available to researchers and experts. The technology that these two giants will use in this process of data collection and analysis is, of course, artificial intelligence (AI).

U.S. Chief Technology Officer Michael Kratsios said computers would examine these documents at a much faster rate than humans and that 13,000 of those 29,000 documents and articles would be analyzed by machine learning methods to find traces of the coronavirus and its origins, while the other 16,000 are just partial texts. Kratsios noted that they expect to put forward new and healthy data. Meanwhile, the U.S. government and technology companies are trying to get permission from the relevant academic publishing houses and institutions to access archives in Google's Kaggle application and to open it up to research and investigation.

In the fight against the coronavirus pandemic, the importance attributed to technology, and especially AI, is increasing gradually. A few weeks back, Google, Facebook, LinkedIn, Microsoft, Reddit, Twitter and YouTube made a joint statement, announcing that they would take action on fraud and misinformation related to the outbreak.

It has been known that machine learning does not always give the most successful results in "sending out the correct notifications." Social media platforms are also aware of this. In fact, they want to take this risk. There is an unintentional increase in the likelihood that internet users who have been under lockdown will see and use false or ill-advised information. Technology giants, however, still want to give it a shot to help humanity.

Cybersecurity more important than ever

With the COVID-19 outbreak, the whole world is now in front of their computers. Telecom operators in Turkey have gained thousands of new subscribers, with almost all transactions done online. While e-commerce companies are working at full capacity and distribution companies are hiring new recruits. Education and commerce are both run online. But doesn't this increase in online traffic once again raises the question, should we be more careful about our cybersecurity?

Fevzi Dülger, the chief operating officer of Istanbul-based company UltorTech, which operates in the fields of cybersecurity and software, touched on this exact issue. “In this process, people have begun to gain more access to the outside world through digital means, especially via computers and phones in their homes, to socialize, shop and work,” Dülger said.

“We are aware of the importance of human health and our personal data, but viruses are not only transmitted to humans(!) Cyber pirates aim to damage companies, their users and customers by increasing their attacks in such situations. Today, I would like to draw attention to the fact that companies and users still do not take cybersecurity seriously but they should become more aware of what's going on. In this context, companies are required to ensure the cybersecurity of all the systems that have access to personal or protected data.”

Dülger also pointed out that users can be deceived under false pretenses via phishing, usually using emails that forward fake content or online shopping sites, and fraudulent emails that look like they are sent by lawful authorities.

It would not be wrong to say that the spirit of entrepreneurship has spread all over Turkey. With each passing day, we can see that smart ideas from different provinces in our country are being turned into promising projects with advanced technology and therefore contributing to both the economy and society. One such idea recently emerged from Kocaeli. The project, created by two engineering graduates from Gebze Technical University, became Turkey's first level five fully autonomous, sea-cleanup device.

Furkan Mutlu and Mustafa Erol's venture to produce autonomous sea-cleaning robots made it to the finals at the Global Cleantech Innovation Program (GCIP) – Turkey contest in 2016. After receiving a grant from Turkey's Scientific and Technological Research Council (TÜBİTAK) under its 1512 techno-enterprise capital assistance program and training from GCIP mentors, the duo founded their own company IWROBOT X in Gebze in 2018. The company currently consists of four people producing projects that combine autonomous and AI technologies.

“ODTA's software and hardware were created after six years of research and development (R&D). Test processes are underway in Yalova. We are planning to export the ground station we have developed for ODTA. In this context, our first product has been completed for our ground station which has a range of 50 kilometers,” he said.

Stating that they are aiming to start exporting their product after completing ODTA's pilot process in Turkey, Erol said: “Our talks with France, Greece, Russia and the Kingdom of Tonga (in Oceania) have begun. We are working with Middle Eastern Technical University's (METU) Institute of Water Sciences to launch ODTA's pilot process at the Mersin Metropolitan Municipality this summer,” he added.