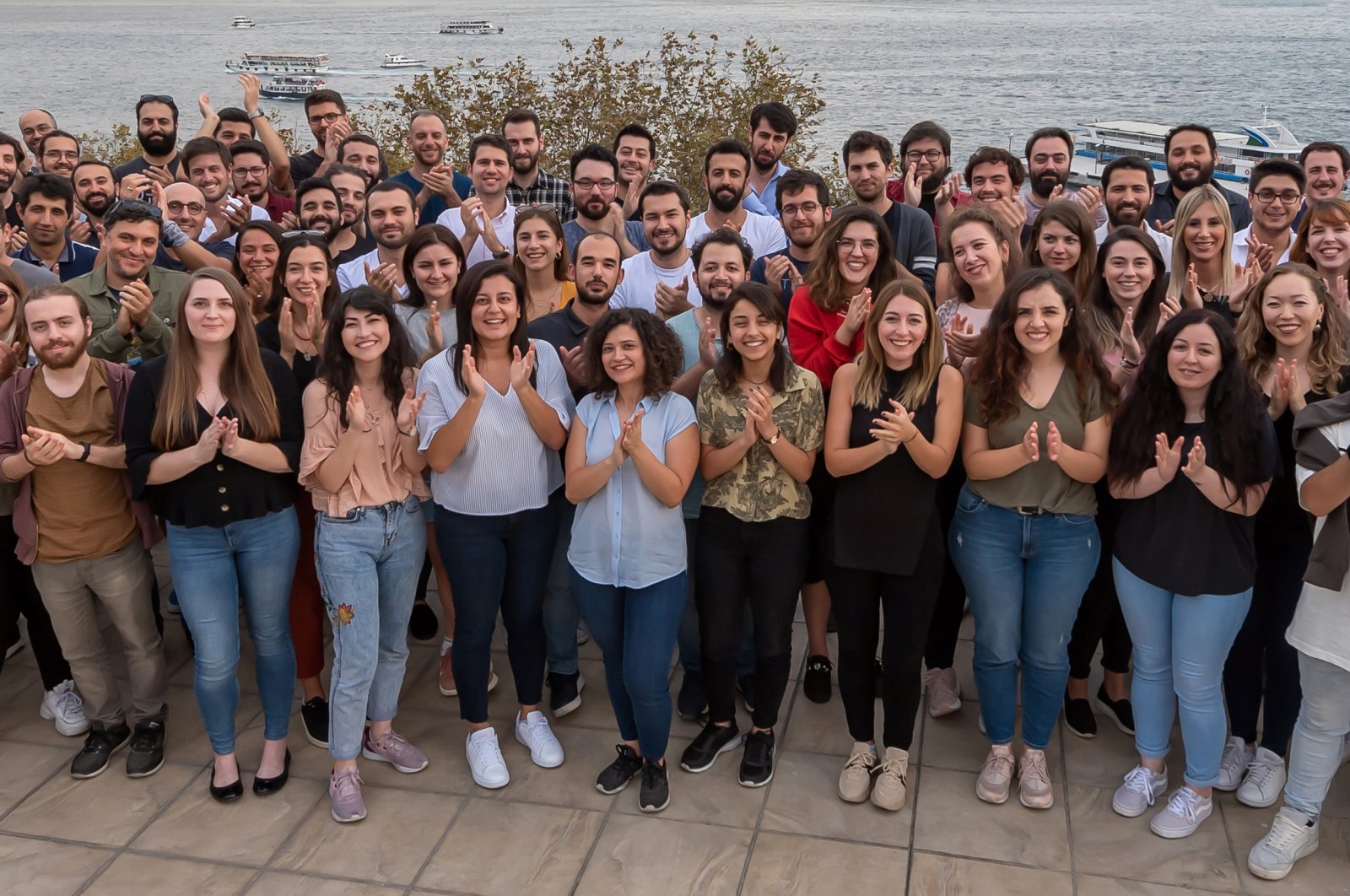 Peak has managed to become a global player under the leadership of Sidar Şahin and the common mind of 100 young people from 35 universities, reaching $1.8 billion in value as the company with the highest per capita income and tax per employee in Turkey

Istanbul-based gaming company Peak, which on Monday announced a sales agreement with the United States-based mobile gaming giant Zynga for $1.8 billion (TL 12.20 billion) and has achieved global success with a team of 100 people, will now inspire thousands of technology entrepreneurs.

With the huge deal that turned the global venture ecosystem's attention toward Turkey, Peak has enabled many entrepreneurs to dream bigger. These 100 young people worked patiently to design games that would make a global impact for 10 years in their Kabataş office, which was designed to create a pleasant working environment. The company kept its headquarters in Turkey and paid the full amount of its tax. With the support of a handful of investors who believed in the team, they managed to ink a $1.8 billion sales agreement by receiving only $20 million in investment in 10 years. After Peak's success, nothing will be the same.

Istanbul as a gaming center

Built by 100 common minds, Peak has attracted international attention to Istanbul in the gaming sector. Peak is a Turkish startup with a different structure of team culture standing out rather than just leaders. Let's get to know this structure that highlights the team's overall success. Strategy Director Ömer İnönü, one of the managers who lead the team with successful and great devotion, said they are a team of 100 people combined from more than 35 universities in Edirne, Tekirdağ, İzmir, Ankara, Denizli and Trabzon that bring products to the world.

“Under the leadership of Sidar, we have all learned that we can patiently succeed by supporting each other. We aim to pursue long-term goals. If you patiently pursue long-term goals, you will definitely be rewarded. Even if you have not achieved exactly what you desired, there is a lot being on the road can provide. We focus on the values that 100 people have created and will create from now on. It is very important to continue our enjoyment of producing together,” İnönü said.

Regarding what keeps people working all over the world here and what brings success, İnönü said: “Although we made mistakes from time to time, we managed to recover from these mistakes. We went through an important learning process. We learned to use our energy correctly. We sold card and board games like Okey to Zynga. A part of the team that joined Zynga continued to increase their success through focus. We loved making puzzle games. With Toon Blast and Toy Blast, we quickly gathered the fruits of focusing on the user experience. We are proud to make our millions of customers happy in 193 countries, including places where competition is strong, such as the U.S. and Japan.”

Peak gets almost all of its income from abroad. Reaching approximately TL 500 million ($73.79 million) in taxes in 10 years is an incredible value for the startup. Peak’s founder Sidar Şahin, who sold his most valuable Okey game at that time to Zynga about three years ago for $100 million, could have moved the company's headquarters to one of the tax havens or European capitals where he would get a good tax cut. However, Şahin and his team opted to stay and continued to pay taxes on every penny they earned.

İnönü explains their sensitivity in this regard. “We specifically wanted this. We have to pay the value we have obtained with the people of this country to this country, which is one of our motivation resources,” he stressed. “We attach importance to producing this value from Istanbul and adding value to Turkey. It is very valuable for us to give back what we earn from this country with tax.”

All eyes on Turkey

Cem Sertoğlu, the partner of Earlybird Venture Capital, one of Peak's long-term investors and biggest shareholder, evaluated the agreement, saying it will turn all eyes to Turkey for a while. “It is necessary to evaluate this well. The world game giant Zynga now has an important center in Istanbul outside of San Francisco. Besides, Zynga's most valuable games bear the Peak signature. I think this will have a positive effect,” he said.

Sertoğlu, who met Şahin at a meal in 2007 when he returned to Turkey, stated that they were very happy to be part of the team investing patiently. “We are very pleased to receive a good return on a long-term investment for our investors. I think such a return from a startup that received an investment of $34 million in total would encourage many investors. We had a fund of $150 million. Now we will have a 180 million-euro Eastern Europe-oriented fund. We aim to use 50% of this fund, corresponding to 90 million euros, in Turkey,” he continued.

Getting used to a leader who celebrates quietly

Turkey will also become accustomed to the quiet joy of Şahin, the leader of a 100-person team, who created a company valued at $1.8 billion. This is a different attitude that proves he is team-focused.

Şahin started by following the learning process in Turkey where the giants paved the way. In other words, while trying the right things to earn while doing business with his team, he obtained income in the learning process. In the following years, he managed to create global games by focusing on and strengthening the team's muscles.

“Alibaba bought 82% of Trendyol for $728 million and DeliveryHero purchased Yemeksepeti for $589 million, while Zynga acquired Gram Games for $250 million plus bonuses. The Peak acquisition will be Zynga's second acquisition in the Turkish gaming industry,” he said. “We can say that Zynga loves Turkish gaming companies. In terms of size, it will be the biggest technology company sales agreement in Turkey. In fact, we shouldn't be too surprised by Peak's sales amount. Because, last year, Peak was one of the top three tax-paying startups with a tax base of over TL 500 million. Considering that it was established in 2010, reaching TL 500 million in tax base and a valuation of $1.8 billion in 10 years is a mega-success. Considering that the startup received investments with a valuation of $112 million six years ago, the investors will have made at least 18 times more in sales agreements. The startup was also the most invested startup for years, with over $27 million in investments from venture capital and angel investors between 2010 and 2014.”

According to Ünsal, to become a unicorn it is necessary to have received investment or made a sales agreement (exit) with a value of over $1 billion. For this reason, it could not officially be called a unicorn since Peak had no such transaction in recent years. During this process, Peak became Turkey's first official unicorn. Another unofficial unicorn is sahibinden.com, one of Turkey's leading online shopping sites. The nearest candidate is Getir, a fast-delivery startup. Then, if its business grows at the same pace, Insider, a platform that helps optimize online marketing campaigns, can follow as a unicorn candidate. Modanisa, a ready-to-wear fashion portal, is another candidate that can become a unicorn if things go well.

Zynga has signed successful purchasing agreements under the management of Frank Gibeau, who became the CEO of the company in 2016. Having previously acquired Gram Games for $250 million from Turkey, Zynga has seen a critical rise in revenue growth and successful returns. Aiming to create a mini-empire of successful gaming studios, Gibeau highlighted the transformational importance of Peak's acquisition in a statement to Bloomberg, stressing the company's revenue growth and positive impact on the active user side.

Having met with Peak's founding partner and CEO Şahin in 2017, Gibeau bought card and board games, primarily Okey, for $100 million. Despite the COVID-19 outbreak hitting the U.S. in March, both companies decided to continue negotiations.

Reaching a total of 5.5 million users by obtaining 500,000 new subscribers in this period, MentalUP aims to increase the number of users reaching services by providing a 30% discount on membership fees.

The platform has drawn intense attention as the first and only gamified education platform for children in Turkey.

MentalUP aims to develop children's mental skills such as attention, memory and problem solving with enjoyable exercises developed by specialists, academics and game designers. MentalUP, which stands by children in the distance education period, offers a 30% price advantage with a full membership fee of TL 125 instead of TL 179.