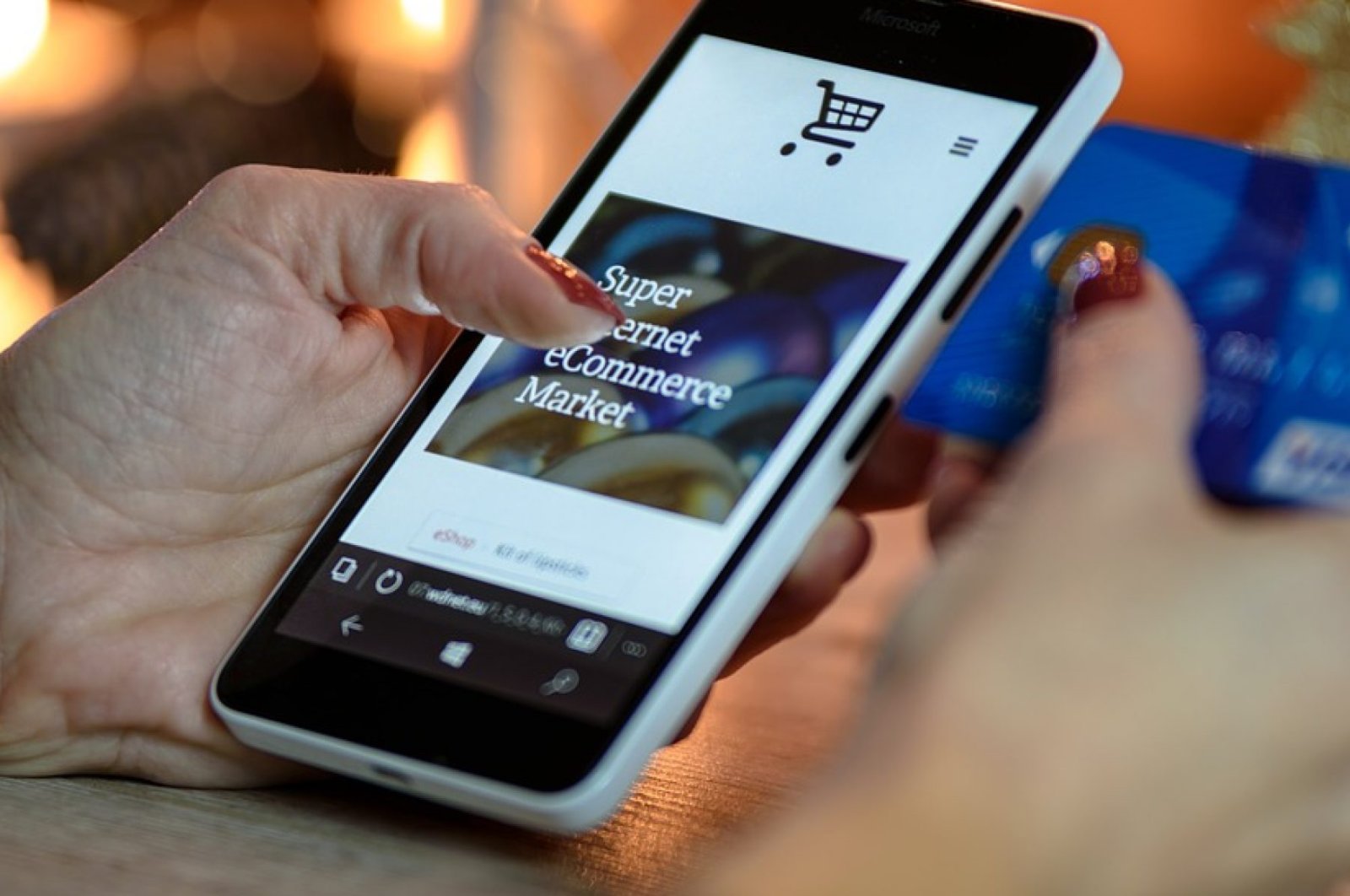 E-commerce companies have been in search of ways to overcome obstacles posed by the coronavirus pandemic. (File Photo)
by Timur Sırt Jun 26, 2020 3:31 pm

Turkish ready-to-wear fashion portal Modanisa, which conducts e-exports with 130 countries, is an example of e-commerce platforms that have managed to maintain overseas sales by renting commercial aircraft during the pandemic

As the coronavirus outbreak hit the world trade hard, the e-commerce front continues to grow with creative solutions.

The pandemic did not interrupt sales of Turkish modest apparel and e-commerce site, Modanisa, which amid high demand even used commercial aircraft to continue exporting to 130 countries.

Kerim Türe, the founder and chairman of Modanisa, said they were "one of the first e-commerce companies in the world to use express aircraft cargo for standard cargo."

"When the commercial passenger flights came to a halt during the pandemic, we had sales but no plane for cargo," Türe said. "Together with our logistics partners, we rented commercial planes from the airlines and tied our Modanisa boxes on the seats. We succeeded in delivering our products to customers by filling every possible place on the plane, including the overhead lockers."

However, he said, their job did not end with delivering the products to the relevant country. "There are a limited number of employees at the customs due to security measures and taking products through the customs also requires a significant effort in this process," he noted.

The job did not end with goods passing through the customs. As Türe explains it, countries were declaring curfews just when the products were about to be distributed.

"If you cannot distribute the products, you will disappoint your customer," he stressed. "In some countries, they banned the distribution of products other than essential needs and food. So we found a creative solution to this problem and hid Modanisa boxes behind boxes of rice and pulse."

Türe underlined that they currently export to 130 countries. "We are the first company in Turkey to e-export using Electronic Commerce Customs Declaration (ETGB). We have been a company with the highest e-exports in Turkey for the last three years,” he noted.

"We were looking at how we would grow in 2020. However, in this process, we saw two different situations as of March 15 and after. Online shopping has grown rapidly in terms of essential needs. Studies have shown that online sales of personal care products increased by 195%, cosmetics by 200% and sports goods by 124%. Online travel spending declined by over 70%, while online clothing spending declined between 30% and 50% in France and the U.K. in the first months," he explained.

Evaluating the sales realized during the pandemic period, Türe pointed to a 20% decline compared to last year.

"During this period, we reached over $35 million in sales. Compared to the same period of previous years, there is a 20% decrease," he added. "At Modanisa, we made our preparations accordingly because our targets were much bigger. However, it is also valuable to be in this situation in such a period. Moreover, we anticipate reaching the old figures toward the beginning of the year."

First of all, Türe said, there is a need for renewal. "The purchase of new clothes can also be seen in this renewal need. The return to the old will not happen immediately. We can say that it will happen gradually. It will take a while before the consumer starts trusting and spending money on clothing and other consumption once again. In this period, the decline in luxury expenditures was quite high. Since some of these are made with suitcase trading, the decline in this area is remarkably high. This year, we aim for a sales figure of $200 million. During this time, we reached $35 million in sales. We think that we will reach our target. We have 20 million visitors and 80,000 different products on our site. There are 3.2 million products in our warehouse."

“Billion-dollar investments can also be made from Turkey and more will follow. As long as the entrepreneur focuses on creating value, crisis or geography does not matter when the value is formed. Brands and business models with users all over the world can have an advantage during valuation," he said.

Depending on one country in production is dangerous

Modanisa chairman said the investors felt the same excitement about an international brand from Turkey.

"During the pandemic, brands once again saw they had to spread the risk in producing at more than one country. We hope that Turkey will be a center of attraction for production, especially for European brands," he added.

Türe stressed Turkey’s strong capability in textile production. "Combining this power with our expertise, it is highly likely that we will emerge as a global brand in the textile fashion industry. The most important issue is to offer the best service to our customers. In this context, we plan to invest in logistics infrastructure in many regions in the next three years. We realized the first phases of these investments in the U.K., Dubai, and the Netherlands. It is not our top priority to exit by making a sales agreement. The goal is to become a profitable and growing platform brand that comes from this country, that the world knows, loves and uses, as well as to serve as the highway of fashion brands in this country."

During the pandemic, many institutions all over the world have had cash flow problems. Fintech startups have come up with interesting solutions to this.

Figopara, a fintech startup established to expand the working capital of companies and to mediate supply financing, continues its studies for new technologies with the investment of $1 million it received from investors, including the World Bank and Revo Capital, in May.

Figopara, which has mediated different small- and medium-sized enterprises’ (SMEs) transaction volume of nearly TL 800 million ($116.70 million) until today, has acted as a mediator for TL 230 million in the three months of the coronavirus epidemic (March 11-June 23). With the services provided by Figopara and the transactions by the companies that wanted to meet their financing needs without interrupting their cash flows between March 11-June 23, the invoice discounting transaction has tripled compared to the same period of last year.

Stating that their platform has accelerated the supply chain cycle by easing access to financing in trade between buyer and seller, Figopara co-founder Koray Bahar underlined the importance of companies maintaining their operations without disturbing cash flows due to the adverse effects of the coronavirus outbreak.

Emphasizing that e-commerce companies constitute the largest volume, Bahar said Figopara is preferred by those who want to manage the supply chain and overcome the cash flow problem. "There are also suppliers of manufacturing companies. In April alone, an invoice worth TL 80 million was collected over Figopara without waiting for the maturity. More than 1,000 suppliers and six major buyers use us," he added.

Bahar stated that SMEs need more financing in such a period. “Along with the rapidly increasing e-commerce in the coronavirus period, ISO 100 companies, determined by the Istanbul Chamber of Industry (ISO), have shown interest in Figopara for supplier financing. Since March 11, we have mediated a transaction volume amounting to TL 230 million and raised the amount three times higher compared to the same period of the previous year," Bahar said. "Our goal is to reach three times the growth we have achieved by mediating a transaction volume of TL 1 billion. At Figopara, we continue to do the necessary research and development (R&D) studies for both supplier companies and SMEs to access trade finance more easily. We aim to increase the number of existing 1,000 active users to 3,500."

How does the system work?

Bahar also discussed Figopara's operation. "We agree with buyers in our current model and six banks working with us open a Supply Chain Finance credit limit to this buyer. The suppliers approved by the buyer become members of our platform. And they can discount the invoices approved by the buyer without waiting for the due date," he said. "Banks fund their suppliers with much more favorable conditions with the guarantee of the buyer. We are launching our Figo Skor product in August, and with this model, the companies will be able to subscribe to Figopara without waiting for the approval of the buyers. Then Figo will calculate their score through the data of the e-invoice and e-book, while banks will provide much faster and easier financing to SMEs with this score.

Türk Telekom will provide online cybersecurity training to contribute to the "National Cyber Security Strategy" and the vision of creating a cyber homeland. University students and fresh graduates interested can apply on https://siberkamp.turktelekomkariyer.com.tr/ between June 22 and July 6.

"The motto is 'You Hold the Key to Digital Future!' Cyberattacks against countries and the private sector seriously threaten data security. Lack of human resources trained in this field plays an important role in the higher impact of cyberattacks every day. As part of the Cyber Security Camp, we aim to gain the ability to recognize the tools and techniques effective against cyberattacks and prevent these attacks. The 10-day training program will offer a total of 100 hours of training, given by experts from Türk Telekom and the sector," Vural said.