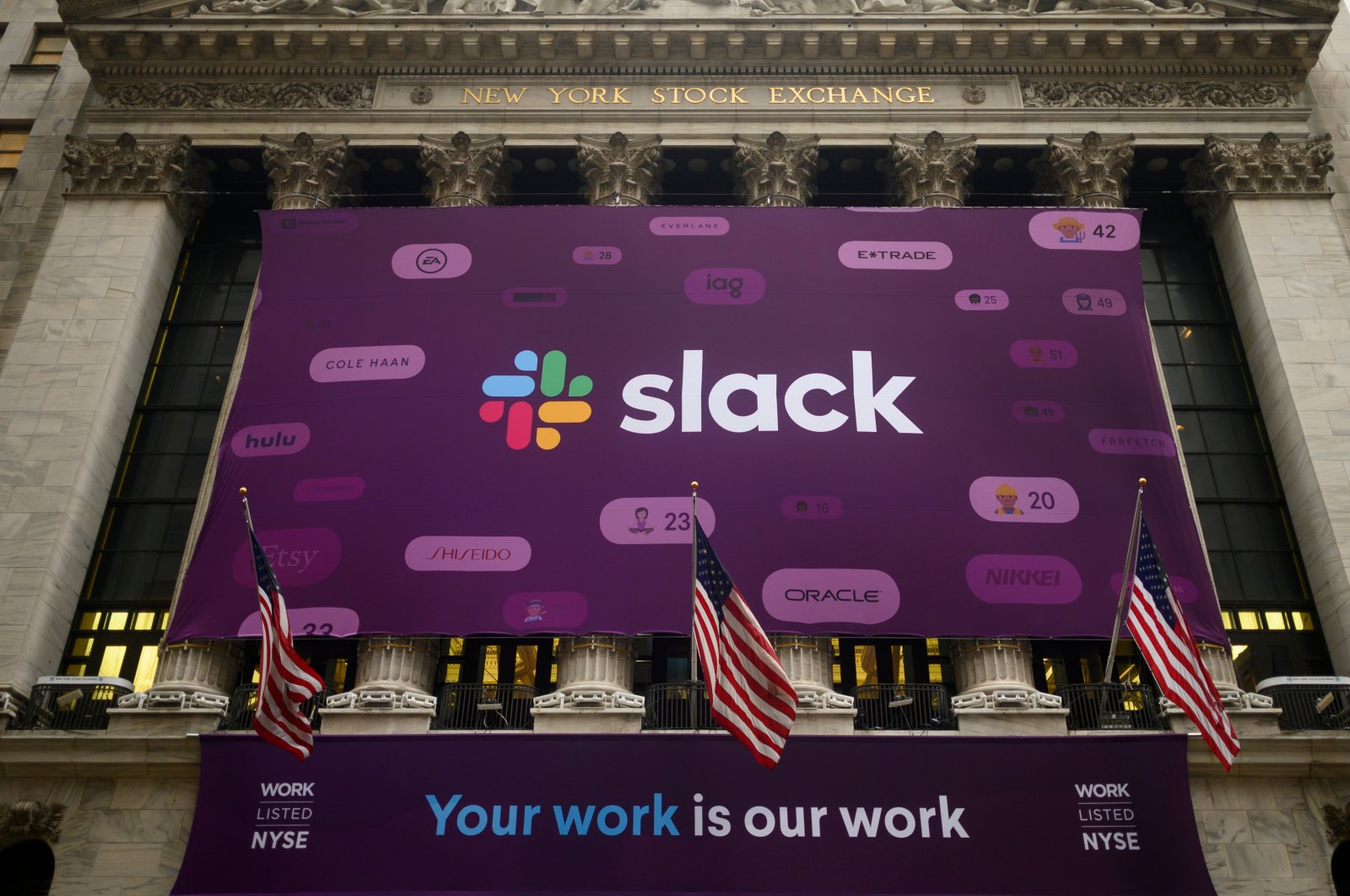 In this file photo taken on June 20, 2019, the logo of Slack Technologies Inc. adorns the New York Stock Exchange after the company's public offering. (AFP Photo)
by Associated Press Dec 02, 2020 1:02 am
RECOMMENDED

Business software pioneer Salesforce.com is buying work-chatting service Slack for $27.7 billion in a deal aimed at giving the two companies a better shot at competing against longtime industry powerhouse Microsoft.

The acquisition announced Tuesday is by far the largest in the 21-year history of Salesforce. The San Francisco company was one of the first to begin selling software as a subscription service that could be used on any internet-connected device instead of the more cumbersome process of installing the programs on individual computers.

Salesforce’s flamboyant founder and CEO Marc Benioff hailed the “cloud computing” concept as the wave of the future to much derision initially.

But software as a service has become an industry standard that has turned into a gold mine for longtime software makers. Microsoft for one has developed its own thriving online suite of services, known as Office 365, which includes a Teams chatting service that includes many of the same features as Slack’s 6-year-old application.

Slack in July filed a complaint in the European Union accusing Microsoft of illegally bundling Teams into Office 365 in a way that blocks its removal by customers who may prefer Slack.

Microsoft also has been posing a threat to Salesforce’s main products, a line-up of tools that help other companies manage their customer relationships.

“For Benioff, this is all about Microsoft,” Wedbush Securities analyst Dan Ives said of Tuesday's deal. “It’s just clear Microsoft is moving further and further away from Salesforce when it comes to the cloud wars.”

Benioff left no doubt he considered the deal to be a major coup, after losing out to Microsoft in 2016 when the two companies were both vying to buy the professional networking service Linkedin. In a prepared statement, Benioff touted the combination as “a match made in heaven” that will “transform the way everyone works in the all-digital, work-from-anywhere world.”

Salesforce has been building on its success in recent years to diversify into other fields, largely through a series of acquisitions that included its previous largest deal, a $15.7 billion purchase of data analytics specialist Tableau Software last year.

Many of the deals have been financed with Salesforce’s stock, which is worth nearly seven times more than it was a decade ago to lift the company's current market value to $220 billion. Salesforce is using its stock to pay for roughly half of the Slack purchase, with the rest being covered with some cash, with some of the money being borrowed during a time of extraordinarily low interest rates.

Slack, on the other hand, hasn’t proven as popular with investors, even though its service that publicly launched in 2014 is being increasingly used by companies and government agencies looking for more nimble alternatives than email. Before news reports of a potential deal with Salesforce surfaced last week, Slack’s stock was still hovering around its initial listing price of $26 when the company went public nearly 18 months ago.

“This is a stellar exit strategy for Slack,” said Kate Leggett, an analyst at Forrester Research. “Microsoft Teams is eating Slack’s lunch.”

Slack co-founder Stewart Butterfield will be hoping this sale works out better than when another company he started, photo sharing service Flickr, was sold to Yahoo 15 years ago. Flickr got lost in the shuffle at Yahoo amid years of turmoil before it was finally sold again in 2018 to SmugMug.

Leggett predicted Salesforce would benefit from owning Slack because it will add a popular collaboration tool to its own software suite, which is focused on managing customer relationships for businesses and government agencies. She said the need for customer-relations agents and other Salesforce users to swarm around a topic and collaborate remotely has only grown with the coronavirus pandemic that has sent so many office workers home and got many hooked on new online tools.

“I think the pandemic’s played a massive role" in paving the way for the deal, Ives said. “The Zooms, the Slacks, the Microsoft Teams, that’s going to be a new part of the workforce.”

Ives said Benioff was also running out of time to catch up to Microsoft, which remains a secondary player in Salesforce’s core customer-relations-management business, known as CRM, but way ahead in providing a broader array of cloud-based services.

Slack and Salesforce are headquartered about a block away from each other in San Francisco. Slack's office is in the shadow of the 62-story Salesforce Tower, the city's tallest building. If all goes smoothly, the two companies hope to close the deal and combine forces sometime between May and July next year.