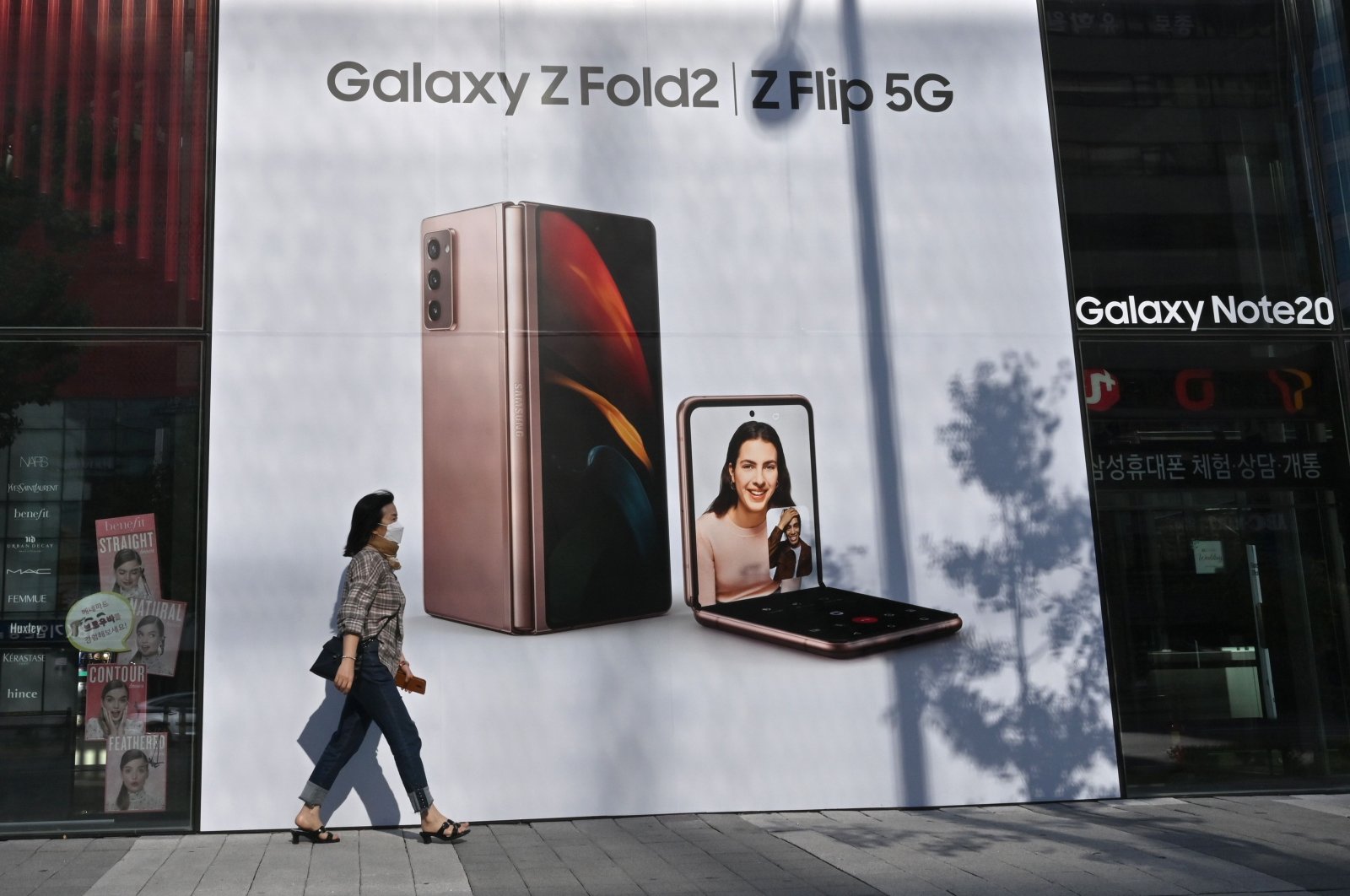 A woman walks past an advertisement for the Samsung Galaxy Z Fold2 and Z Flip smartphones at a Samsung Electronics store in Seoul on Oct. 8, 2020. (AFP Photo)
by French Press Agency - AFP Oct 08, 2020 1:13 pm
RECOMMENDED

Samsung Electronics flagged a leap of nearly 60% in third-quarter operating profits Thursday, as its mobile and chip business were boosted by U.S. sanctions against its Chinese rival Huawei.

The South Korean tech giant said in an earnings estimate that it expected operating profit to reach 12.3 trillion won ($10.6 billion) for July to September, up from 7.8 trillion won in the same period last year.

The prediction would represent the firm's biggest operating profit of any quarter for two years and was also ahead of analyst forecasts.

Samsung Electronics is crucial to South Korea's economic health. It is the flagship subsidiary of the giant Samsung group, by far the largest of the family-controlled conglomerates known as chaebols that dominate business in the world's 12th-largest economy.

Its overall turnover is equivalent to a fifth of the country's gross domestic product (GDP).

A Washington ban on foreign companies providing Huawei with U.S.-origin technology that came into effect on Sept. 15 – cutting off essential supplies of semiconductors and software needed for making smartphones and 5G equipment – also provided a boost.

"For Samsung, it will be a good opportunity to increase market share in Europe where it has been competing with Huawei in various price bands," he added.

The firm's memory business also benefited from the feud after Huawei rushed to stock up on Samsung-made semiconductors before the U.S. restrictions kicked in.

"Huawei has stocked about six months' worth of extra inventory before the U.S. ban took effect on September 15," MS Hwang, an analyst at Samsung Securities, told Bloomberg News.

"Huawei's purchases are offsetting weakness in server-use demand and are devouring market inventory, which should affect prices down the road."

But analysts said falling chip prices could put a damper on Samsung's performance in the final quarter of the year.

Samsung is the world's biggest manufacturer of memory chips and led the DRAM market with a 43.5% share in April-June, according to market researcher TrendForce.

Server DRAM chips enjoyed a boost as the pandemic prompted working from home and online classes – but were now experiencing "significant oversupply," it said in a report.

"Therefore, contract prices of server DRAM products continue to descend to new lows," it went on, forecasting a 13-18% drop in the fourth quarter.

Despite the optimistic forecast, Samsung Electronics shares closed down 0.3% on Thursday.

Adding to the company's challenges, vice-chairman and de facto leader Lee Jae-yong is being retried over a sprawling corruption scandal that could see him return to prison.

He is not being held in custody during the proceedings, but a guilty verdict could deprive the firm of its top decision-maker.