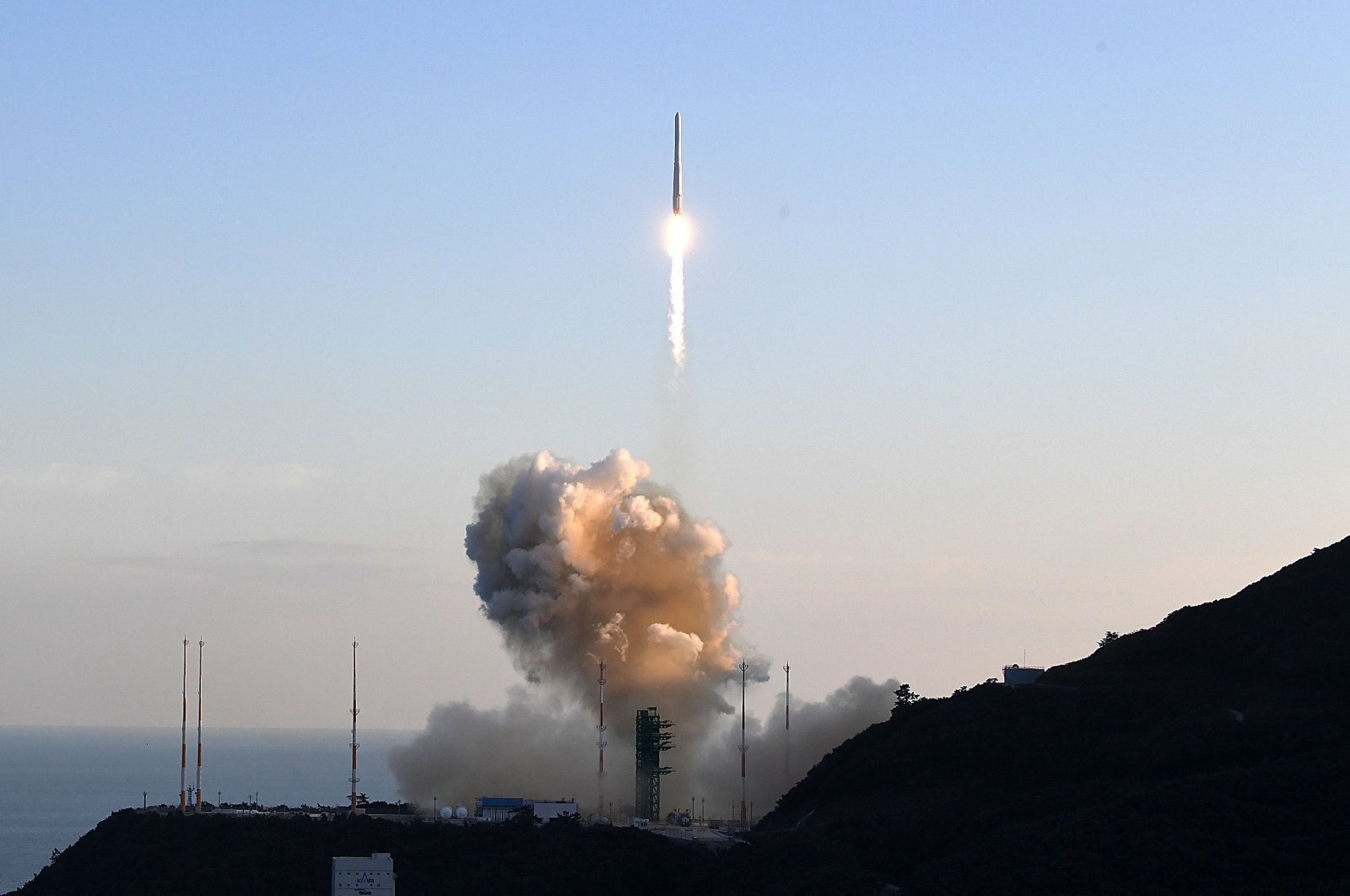 South Korea on Thursday launched its domestically-developed space rocket, a first for the country as Seoul seeks to join the ranks of advanced space-faring nations. The rocket was carrying a 1.5-ton payload.

The Korean Satellite Launch Vehicle II, informally called Nuri, rose upward from the launch site in Goheung trailed by a column of cosmic flames, with a television commentator saying: "It looks like it's soaring into the sky without problems."

Within minutes it had reached 600 kilometers (372 miles) in altitude, the beginning of its targeted range.

The rocket has however failed to place its cargo into orbit, delivering mixed results for a test launch.

President Moon Jae-in, who watched the launch from the space center, said the rocket completed its flight sequences but failed to place the test payload into orbit.

"Unfortunately, we did not fully reach our goal," he said in a speech at the site.

Moon praised the workers and said that, despite the incomplete mission, the project would press ahead.

"It's not long before we'll be able to launch it exactly into the target trajectory," he said, according to a transcript. "The 'Korea Space Age' is approaching."

But it has lagged in the headline-making world of spaceflight, where the Soviet Union led the way with the first satellite launch in 1957, closely followed by the United States.

In Asia, China, Japan and India all have advanced space programs, and the South's nuclear-armed neighbor North Korea was the most recent entrant to the club of countries with their own satellite launch capability.

Ballistic missiles and space rockets use similar technology and Pyongyang put a 300-kilogram (660-pound) satellite into orbit in 2012 in what Western countries condemned as a disguised missile test.

Even now, only six nations – not including North Korea – have successfully launched a 1-ton payload on their own rockets.

South Korea would become the seventh if Nuri succeeds in putting its 1.5-ton dummy cargo into orbit.

The three-stage rocket has been a decade in development at a cost of 2 trillion won ($1.6 billion). It weighs 200 tons and is 47.2 meters (155 feet) long, fitted with a total of six liquid-fueled engines.

Officials said the final stage of the rocket appeared to shut down 40-50 seconds early, so the payload did not reach the speed needed for its target orbit. The cause of the early shutoff was still being investigated, but it may have been a lack of pressure inside the fuel tank, a premature command from control computers, or other factors, officials said.

"Today's launch left some disappointment, but it is significant as it was the first test of the launch vehicle independently developed with our own technology," Science and Technology Minister Lim Hye-sook told a briefing. "It's meaningful to confirm that all major launch steps were carried out and we have secured core technology."

As the briefing ended, one apparently emotional official bowed and said: "Please support us to make the launch successful in May next year."

The next test is currently scheduled for May 19.

Aiming for the Moon

The South Korean space program has an inauspicious record – its first two launches in 2009 and 2010, which in part used Russian technology, both ended in failure, the second one exploding two minutes into the flight with Seoul and Moscow blaming each other.

Eventually, a 2013 launch succeeded but still relied on a Russian-developed engine for its first stage.

The satellite launch business is increasingly the terrain of private companies, most notably Elon Musk's SpaceX, whose clients include the U.S. space agency NASA and the South Korean military.

"Rockets are the only means available to mankind to go out into space," Lee Sang-ryul, the director of the Korea Aerospace Research Institute, told local paper Chosun Biz.

"Having such technology means we have fulfilled basic requirements to join this space exploration competition."

Thursday's launch is one step on an increasingly ambitious space program for South Korea, which President Moon Jae-in said would seek to launch a lunar orbiter next year, after he inspected a Nuri engine test in March.

"With achievements in South Korean rocket systems, the government will pursue an active space exploration project," he said.

"We will realize the dream of landing our probe on the Moon by 2030."