Transformation: A concept of rise or fall for automotive industry 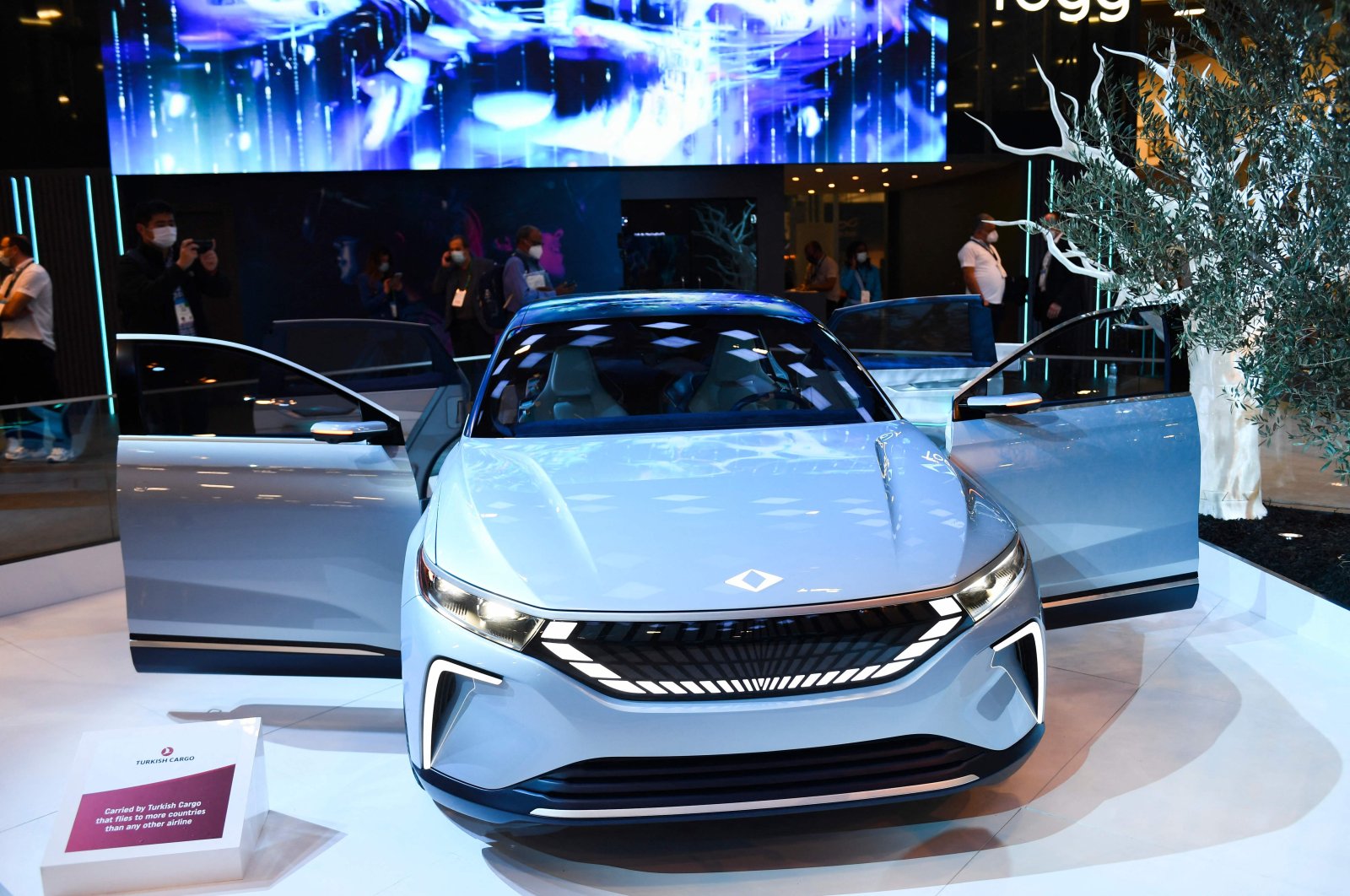 The automotive industry is going through a transformation, similar to the one that saw what was the once world’s largest mobile phone maker Nokia’s fall from grace nearly a decade ago after it suffered from a series of poor management decisions and failed to keep up with rapid market change, innovation and competitors.

This transformation that is seeing the automotive sector rapidly turning into a mobile ecosystem is an opportunity for Turkey’s Automobile Joint Venture Group (Togg), a mobility-oriented technology company that is developing the country’s first domestically produced car, according to its CEO, Mehmet Gürcan Karakaş.

Karakaş’s remarks came as Turkey’s first indigenous vehicle made its international debut at the world’s largest technology and gadget fair, the Consumer Electronics Show (CES), which was held this week in Las Vegas with a heavy presence of automakers unveiling their newest vehicles with advanced interconnectivity and autonomous functioning.

Togg showed off its Transition Concept Smart Device, an all-electric fastback concept car. At the same time, it also showcased its experienced team and startups that are part of an ecosystem that is building the car’s smart systems, from a driver monitoring system for greater safety to a plethora of infotainment screens.

Karakaş highlighted that automotive industry players that fail to keep pace with the ongoing transformation would recede from the global stage, stressing features that make Togg different.

“Those who fail to achieve the transformation are envisaged to disappear. I don’t need to go into the names of the companies. We compared almost 20 companies with our global consultants. Large companies must transform in the business environment,” he noted.

In this entire transformation, Togg has focused on consumers and their changing expectations, said Karakaş.

“There is no point in offering something that will not benefit the consumer. Such case was present before when brands were offering things customers did not ask for. Those who ensure this transformation will survive. The companies that fail to achieve it will be the ‘Nokia’ of the automotive sector,” he added.

“Even giants that have factories in dozens of different countries but do not rely on intellectual capital and do not achieve transformation with the intelligence of their employees and organizations are doomed to lose. We are ready for data and user-oriented transformation.”

Karakaş expressed eagerness to obtain motivation in cars like the one that giants such as Google and Apple have while entering the living rooms of houses.

Pointing out how the competition will be shaped by lifestyle changes, he stressed that “users will have a chance to meet their shopping needs in autonomous and semi-autonomous vehicles.”

“There has never been such a chance before. Now the mobility ecosystem that is transforming the new time created here in favor of the user will be successful. Those who foresee the future expectations, correctly set them up and implement them will respond to the changing needs of the customer,” he explained.

The illuminated Togg logo is unique to the car and represents the unification of Eastern and Western cultures.

“The two arrows in the logo design represent the fusion of East and West, forming a gemstone in the center,” Karakaş said during the event.

“Additionally, our logo emphasizes that Togg is a technology company that connects technology and people at the juncture of today and tomorrow through its life-improving mobility solutions.”

Togg’s technologies, brought together under the “Smart Life” platform, encompass much more than a fully connected car, according to the CEO.

“We’re building Togg with a completely user-centric approach. If a product doesn’t create user value, it will not survive,” Karakaş noted. “We are creating mobility solutions through a business model that’s user-centric and data-driven. We’re developing solutions that will enable a more comfortable mobility experience through the ecosystem, and that will grow around our smart device.”

Karakaş said they were looking after four features while adding new members to the team.

“We want them to be open to lifelong learning. After all, in such transformation, you must always be open to learning. Secondly, we need to know how to motivate ourselves. In a world with a lot of emotional ups and downs, you can’t expect everyone to come and pat you on the back. We need to know how to ensure emotional stability in the organization. The third is intellectual capacity and competence. We employ people from different sectors, from the defense industry to e-commerce. After seeing the overall strategy, you need to have the ability to roll up your sleeves and solve the job. Fourth, we need unifying solution-oriented people who see the glass half full. We have carefully selected all our employees,” Karakaş explained.

“You need to manage the accumulation of knowledge. You need a team that questions itself every day. If you just leave the job to the one above, you’ll be as smart as the one above. The intelligence of the organization lies in the team. If you leave it to the organization, it will be as smart as 300 people if it has 300 people, or 5,000 people if it has 5,000 people,” he noted.

“The authority you provide to the teams and the right delegation of the job determines the success in the application. Giant companies don’t just disappear. They don’t realize that the world changes every once in a while, that this development may not be ravaging. That’s why we started with benchmarking while embarking on our journey. Our radars and sensors are fully turned on. We must focus on user needs as much as on technology.”

Togg’s CEO says they had to build a whole new ecosystem with technology startups.

“The smartphones that we hold in our hands today have made us dependent on them. Now the benefit we provide over the phone has become part of our lives. Now imagine such a huge ecosystem. Within the framework of the mobility concept, we are doing with technology startups what people could do even before they go from point A to point B and while they go,” Karakaş said.

“We are doing trials with close to 30 startups. We shook hands with about 20 of them. Ninety-nine percent of them do not come from the world of cars. For instance, let’s emphasize that three of these are gaming companies.”

Togg’s debut at CES 2022 also featured artist signatures, from the visualization of technology and human concept to music.

The technology brings together a human and art in accordance with the DNA of the Togg brand.

Artificial intelligence that made a special composition for Togg by learning 2,500 works of classical Turkish music, an olive tree made from recycled material by a three-dimensional printer in 1,001 hours and a digital study that visualizes the meanings of words were the differences that marked Togg’s CES debut.

The AI composed the music that the brand used to say hello to the world. Located right next to it, the olive tree, made of recycled plastic and evoking the northwestern province of Bursa, which hosts Togg’s factory, emphasized the idea of evaluating waste as well as protecting living beings, drawing attention to the values embraced by the company.

Togg’s Transition Concept Smart Device was unveiled with a work composed by artificial intelligence. Composer and new media artist Mehmet Ünal obtained new variations in terms of melody, rhythm and intonation with an AI algorithm from 2,500 works using the data of Barış Bozkurt, who has developed software for scientific measurement and calculation in classical Turkish music.

In his study, Ünal made an adaption to modern sound aesthetics and different music styles by bringing together rhythmic and melodic analysis of the Turkish makam music, a system of melody types used in Turkish classical and folk music, including works of prominent artists such as Itri, Ismail Dede Efendi, Haci Arif Bey, Tanburi Cemil Bey and Sadettin Kaynak.

Safety monitoring system for ‘Made in Turkey’ car

The CES featured not only an area for big players but also Eureka Park, an entire hall dedicated to showcasing startups with the most innovative ideas.

Sixteen ventures from Istanbul Technical University (ITÜ) ARI Teknokent took the stage at the popular gathering and showcased their innovations under the booth organized by the Istanbul Development Agency (ISTKA).

One of these was Büyütech, which has developed a driver safety monitoring system for Togg.

A research and development (R&D) company established in 2011 by Ömer Orkun Düztaş and Alparslan Işıklı, Büyütech is developing products and solutions in the fields of camera design and production and image processing.

Its camera solutions feature monitoring of the exterior as well as the interior of cars to ensure greater safety.

Running operations in more than 120 countries, it has been focusing among others on the automotive sector with its software and hardware solutions, including driver fatigue/drowsiness detection, lane departure warning, surround-view system, dynamic cruise control, mirror camera and front and rear Advanced Driver Assistance Systems (ADAS) cameras.

Developing driver fatigue/drowsiness detection software for Togg, Büyütech has received around 2.5 million euros ($2.8 million) in investment from Farplas, which oversees the mobility-oriented investments of Fark Holding.

The company is preparing to produce its camera solutions as well as the driver fatigue/drowsiness detection system for Togg in the northwestern Kocaeli province’s Gebze district.

The CES also featured a Turkish startup that is engaged in artificial intelligence (AI) and visual data processing to address people’s privacy concerns.

Syntonym was also among the startups from ITÜ ARI Teknokent taking the stage in Eureka Park.

Established in 2019 by Batuhan Özcan and Emre Çavunt, Syntonym is an eighth-term graduate of PILOT, a startup acceleration program of Türk Telekom, one of Turkey’s leading information and communication technologies companies.

The venture looks to address concerns around data breaches and data leakages stemming from the gathering of visual data in public spaces.

It replaces faces in videos with AI-generated, non-existent ones preserving all key parameters such as age, gender, expressions and gaze direction. This process provides an opportunity of deep analytics extraction from synthetic data for the first time.

It aims to help protect people’s privacy and says it does so in a way compliant with the European Union’s General Data Protection Regulation (GDPR). It looks to solve the problems about data privacy of companies from many sectors, from automotive to shopping malls.

Syntonym, which also received an investment from Türk Telekom’s corporate venture capital company TT Ventures, enables users to avoid structural and functional losses in the anonymization process and to use the obtained data in artificial intelligence training by maintaining analytical metrics, in contrast to traditional methods.