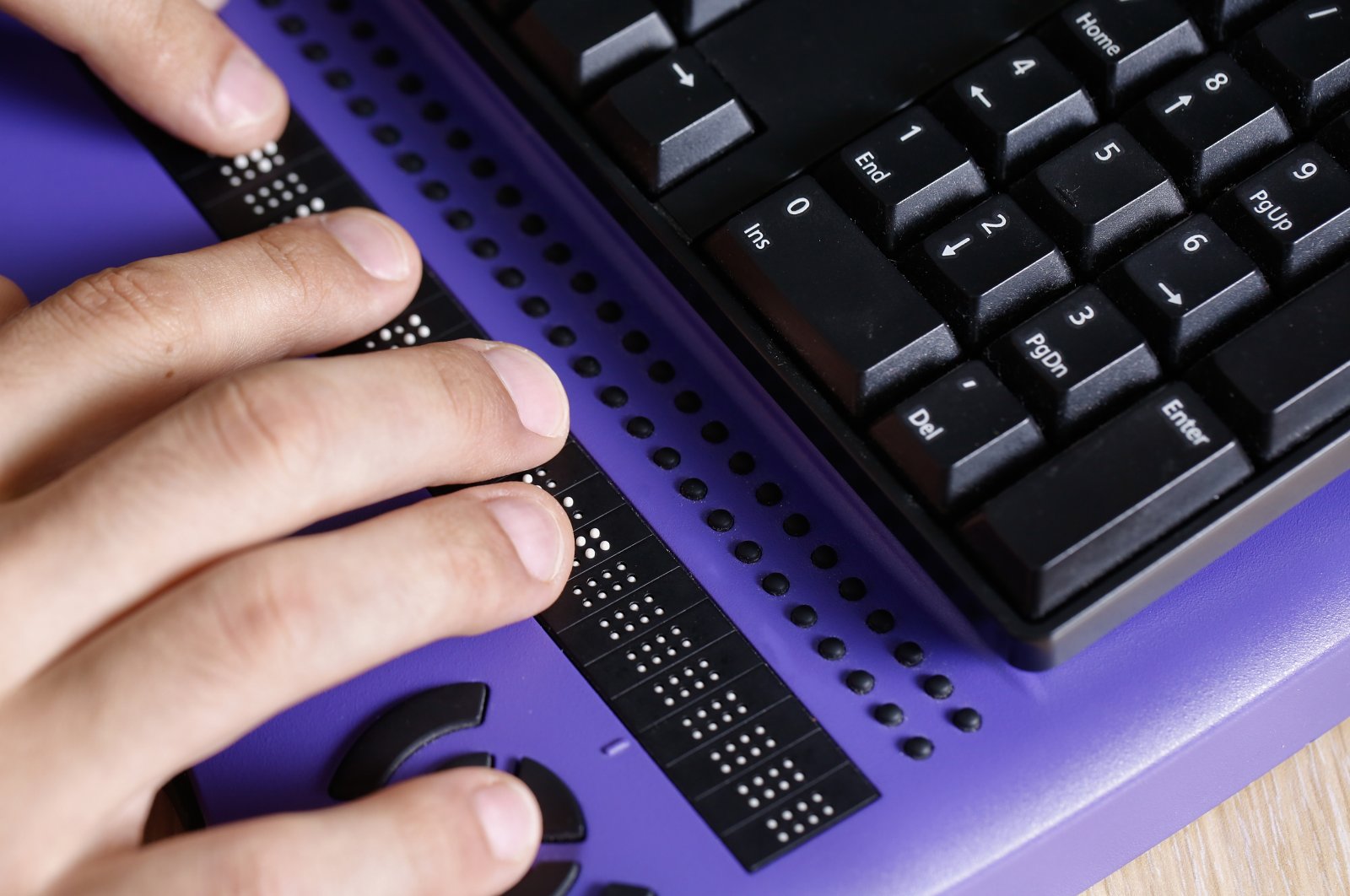 A visually impaired person using a computer with a braille keyboard is shown in this undated photo. (Shutterstock Photo)
by Timur Sırt May 12, 2021 1:48 pm
RECOMMENDED

Turkish telecommunications company, Türk Telekom's Phone Library facilitates the lives of visually impaired people with its drug barcode reading and money recognition projects. In addition, thanks to the Sunshine project, another initiative kicked off by the company, visually impaired children can continue their inclusive education together with their peers.

The company continues to work on enabling people with disabilities to access information and arts under equal conditions by mobilizing the opportunities provided by technology. Continuing its work with a human-oriented approach and producing technological solutions to social issues, Türk Telekom adds value to Turkey with its projects that remove obstacles.

"It is very important for us to benefit from the possibilities of technology in line with users' needs. While determining our corporate social responsibility projects, we produce concrete solutions in line with our mission to 'make everyone feel valued' by keeping pace with the world, Turkey's agenda and basic needs," Türk Telekom CEO Ümit Önal said, noting that they focus on Turkey's priority areas and develop projects in cooperation with nongovernmental organizations (NGO) to ensure the equal participation in life for disadvantaged groups.

"We are happy to be able to make the lives of our visually impaired people a little easier and touch their lives with the Phone Library and the Drug Barcode Reading feature in the application we have implemented in this direction," he continued, and said that with the Talking Paintings feature in the same application, “they are bringing together 35 world-famous paintings with visually impaired art lovers.”

The Money Recognition function, meanwhile, allows them to shop safely and independently.

“We are working to shine a light on the future of our children thanks to the Sunshine project that we have implemented for our visually impaired children,” he added.

The Phone Library project, which was implemented 10 years ago in cooperation with Türk Telekom and Boğaziçi University's GETEM, provides audio content on the phone helping to remove obstacles to access to information for visually impaired people.

With the application tailored specifically for the project, users can access nearly 2,000 audiobooks in 50 categories and 35 world-famous paintings with audio descriptions. In addition, features that facilitate daily life such as instant news flow, Money Recognition and Drug Barcode Reading developed in collaboration with RxMedia Pharma Interactive Pharmaceutical Information Source are offered for the use of visually impaired people completely free of charge.

The Phone Library, where a total of 13,075,200 minutes of audiobooks have been listened to, has approximately 10,000 active users. Aiming to allow the visually impaired access more audiobooks, Türk Telekom has included 30,000 volunteers in the process with the Voice to Books application and enabled 600,000 pages of books to be narrated.

One of Türk Telekom's projects aiming to support disabled people's active participation in life is the Sunshine project, which was implemented in cooperation with the local NGO EyDEr. The project aims to assist visually impaired children to continue their lives without assistance thanks to early intervention training and continued inclusive education with their peers instead of attending school for the visually impaired.

Visual impairment training has been given to 1,000 “Sunshine children” and their families from 81 cities nationwide so far. With the Sunshine at My School project, 5,000 educators were provided with training on visually impaired education, thus raising awareness.

Meanwhile, a software called TahtApp was also developed and implemented by the Türk Telekom research and development (R&D) team so Sunshine children could follow lessons and the board in the same classrooms as their peers.