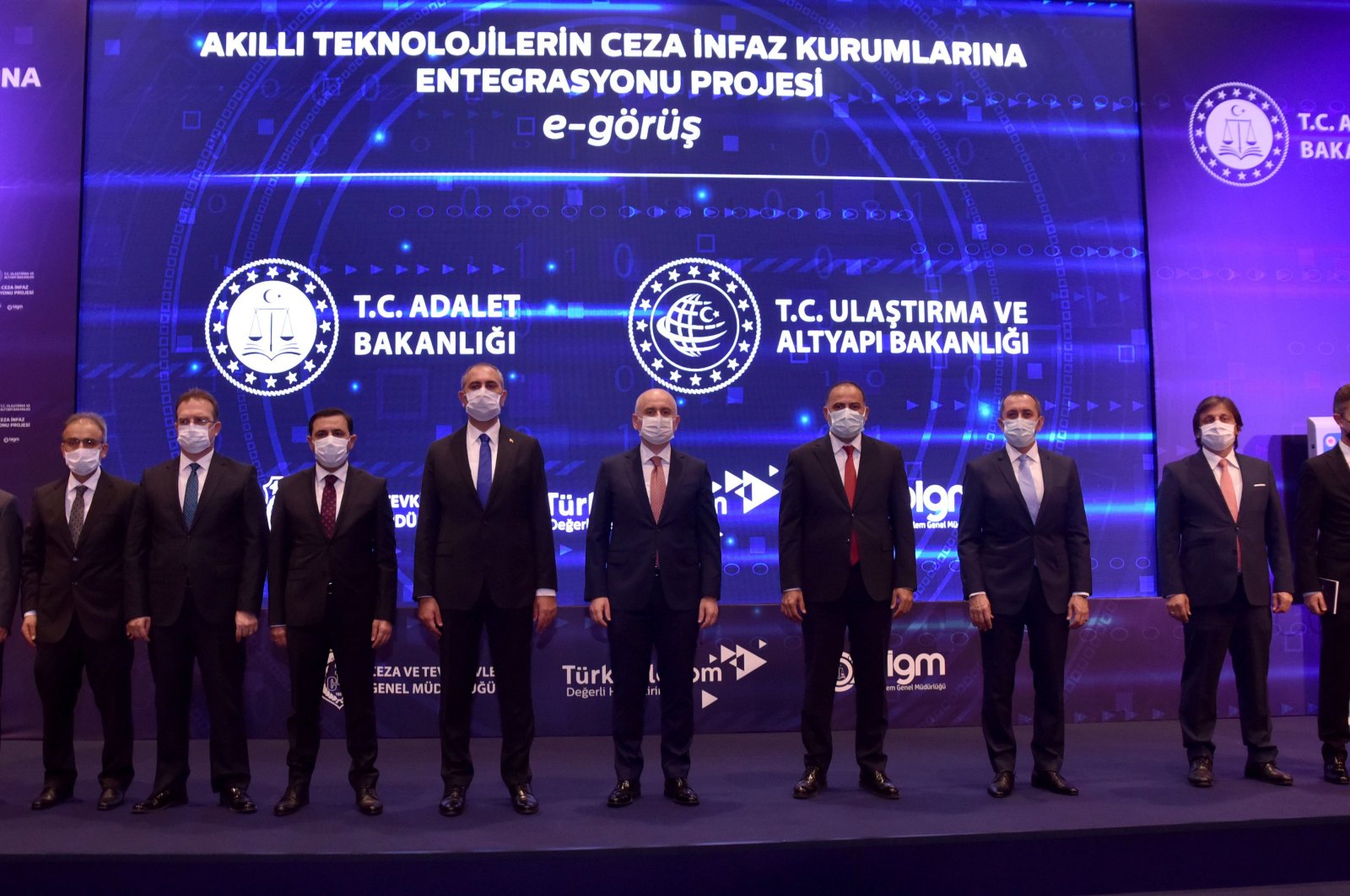 The “Project of Integrating Smart Technologies into Penal Institutions,” recently introduced in cooperation between Turkey’s Justice Ministry and Transport and Infrastructure Ministry, is about to kickstart a digital transformation in prisons and will allow detainees to have video calls with their spouses, children, family members and relatives, as well as provide access to health care services electronically and the right to petition electronically.

E-visitation, a project of integrating smart technologies into penal institutions, will be run through prisoners entering their biometric data into smart multimedia devices, which have been designed to meet all the security conditions that penal institutions require and which will be installed in each room where prisoners and detainees are held.

In this way, prisoners and detainees will be able to get the services they want by selecting them from a touch screen without the need for any staff. In this context, prisoners and detainees will be able to easily access many services such as video and voice calls, canteen order management and online payment, video health services, library book requests, and petition and application procedures.

The system will make things easier for prison management as well thanks to its security properties such as biometric data identification, census counting management, and information and announcement dissemination.

Gül started his speech by extending thanks to prison staff who have worked devotedly during the coronavirus outbreak, as well as to all others who have served in the process, including health care workers.

The pilot scheme of the project, which has been jointly carried out by the Ministry of Justice and Ministry of Transport and Infrastructure, will be rolled out at Sincan Women's Prison in the capital Ankara.

Digital transformation in the judiciary

Pointing out that the basic criterion in providing public services is public satisfaction, Gül noted that the ruling Justice and Development Party (AK Party) has carried out human-centric reforms since the day it came to power.

Gül underlined that applications implemented within the scope of e-transformation are intended for people to access services in the fastest way and at the lowest cost. He stated that the Judicial Reform Strategy Document is aimed at digital transformation in the judiciary. Their main goal is to enable people to access judicial services more easily and affordably, Gül noted.

The minister stated that they attach great importance to all human-centric approaches in penal institutions as well.

“Under this project, convicts will now be able to contact their spouses, children, family members and relatives, and keep their ties strong with them. We believe that this facility will also contribute to the rehabilitation of prisoners,” he said.

"We believe that the possibility of a video call will also be very serviceable for the relatives of convicts. They will meet convicts through video, and so, they will not have to travel and incur expenses or have to go to another province for visitation. And those who cannot go due to illness will still have the opportunity to meet. Making video calls in such a way as to prevent children from entering the prison environment and being shaken there should also be considered as a very important step in the best interests of children. The (COVID-19) outbreak time has also revealed how significant the project is," Gül said.

According to the minister, the project includes services such as electronic census counting, access to health care services, the use of the right to petition and access to books, canteen orders and payments, in addition to video calls.

Gül noted that canteen orders in prisons will now be made electronically, so the deposit money offices in prisons will be eliminated. Convicts will enter the system with their fingerprints and deliver all their requests to whom it may concern, Gül said, adding that the project will also make a significant contribution to the staff who can now devote more time to activities in other areas.

Census count to be faster

Prisons and Detention Houses General Manager Yılmaz Çiftçi stated that the project will enable video calls with devices that will be installed in the rooms of prisoners and convicts.

According to Çiftçi, the project also includes the implementation of applications such as e-doctor, e-library, online canteen shopping and fast census counting with fingerprints. Moreover, canteen orders and payments will be made through the system, and petitions and emails will be sent via the ministry’s communication application.

Most comprehensive application in the world

Önal stated that the project implemented in cooperation with the Ministry of Justice and the Ministry of Transport and Infrastructure is one of the most comprehensive smart communication technologies studies on prisons in the world.

Stressing that their goal is to increase efficiency in prisons, Önal added: “As Türk Telekom, we continue to work with the principle of ‘accessible communication for all’ by contributing to the vision of digitalization of our country. Based on this principle, we are implementing e-visitation, the Project of Integrating Smart Technologies into Penal Institutions, with the smart multimedia systems developed by Innova, our leading subsidiary in system integration.”

He said, thanks to the project enabled through their new product, which they call "Turna," the relatives of prisoners who cannot go to visitation for various reasons and children who cannot see their mother or father will also have the opportunity to make video calls with their relatives.

“Smart multimedia systems have been first put into service at Sincan Women's Prison in Ankara. As part of the plan envisaged by the Ministry of Justice, we intend to expand it to include other institutions in the coming period,” Önal said.