Turkey made strides toward becoming global tech giant in 2021 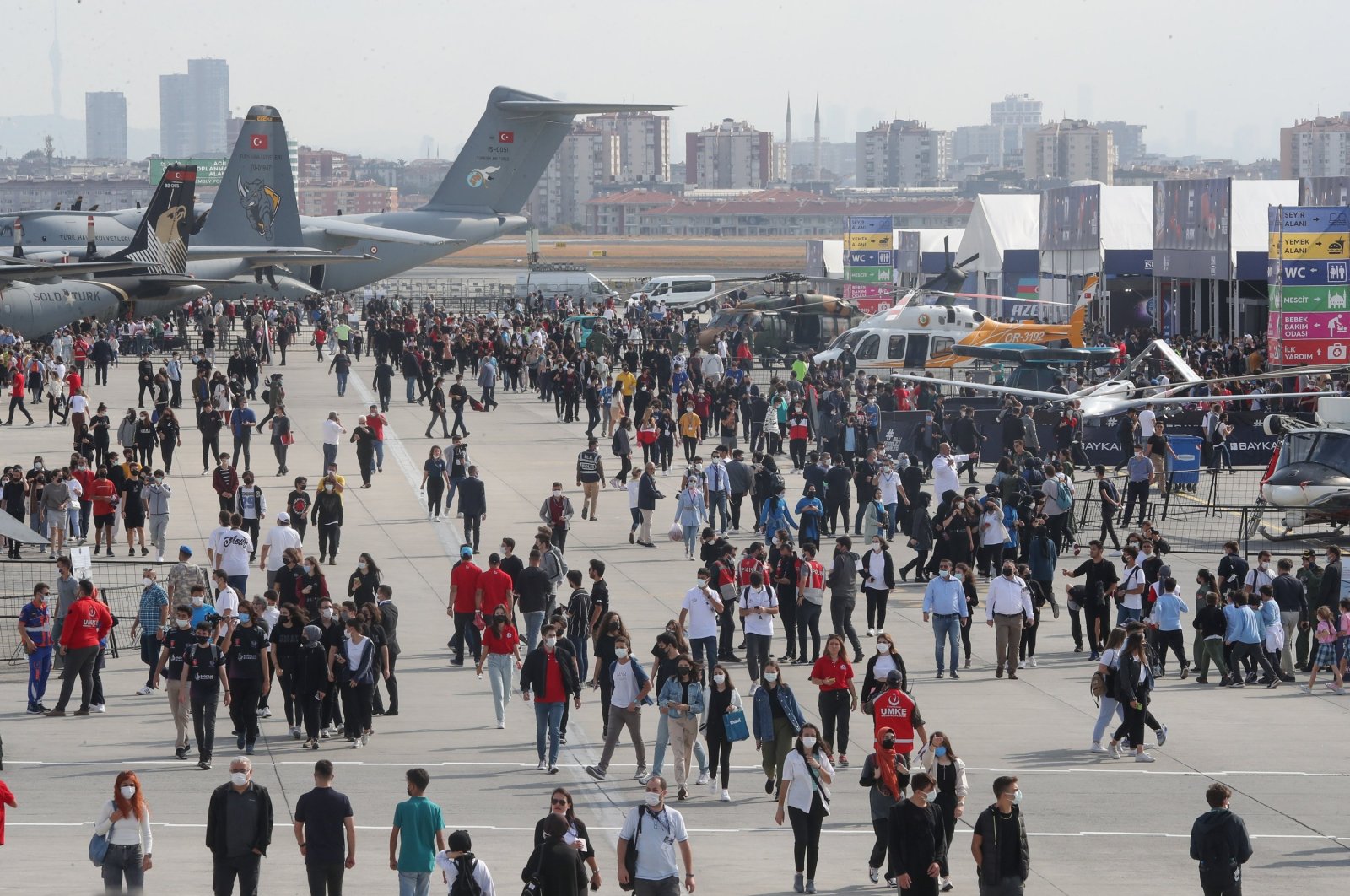 After a tough year due to the coronavirus pandemic measures, such as lockdowns and travel bans in 2020, when events were postponed or organized virtually, 2021 saw Turkey staging important events that attracted a huge amount of participation.

After successful military operations where Turkish defense products proved their quality, such as in the northern Syrian and Nagorno-Karabakh regions, Turkish products became increasingly popular.

The TEI-TJ300 engine, developed by Turkish Aerospace Industries’ engine producing subsidiary TUSAŞ Engine Industries (TEI), with the support of the Scientific and Technological Research Council of Turkey (TÜBITAK), will be able to be used in air, naval and land defense systems.

The country successfully tested in May its first 1,500-hp locally made tank engine, Batu, developed by Turkish firm BMC Power. The engine can be used in various tanks.

Defense giant Aselsan in May successfully tested a micro unmanned aerial vehicle (UAV), Saka, which has a 3-axis gimbal, is developed for exploration and surveillance purposes and weighs around 600 grams (1.3 pounds).

Turkey's Bayraktar Akıncı combat drone, developed by UAV magnet Baykar, broke a record in the country in July by flying at an altitude of 38,039 feet and staying in the air for 25 hours and 46 minutes.

In July, Turkey's HISAR A+ air defense missile system was delivered with all elements and the HISAR O+ system reached the stage of mass production.

The country's ongoing aviation projects also made progress in 2021.

The maiden flight of TAI’s Hürjet project, an advanced jet trainer and light attack aircraft, is scheduled for the end of 2022.

In 2023, Hürjet and helicopter gunship Atak-2 are scheduled to fly, and the country's domestically produced fighter jet TF-X will be rolled out.

Baykar unveiled its newly designed vertical take-off and landing (VTOL) UAV in September. The new UAV does not need a landing track as it can take off from several different locations, including naval and mobile platforms.

Turkey successfully test-fired its long-range Siper air defense missile in November. The system is expected to rival the S-400.

In February, Turkey unveiled its national space program, a roadmap based on realistic and competitive goals.

"The national space program will carry our country to an upper league in the global space race," said President Recep Tayyip Erdoğan.

As part of the program, Turkey aims to make its first contact with the moon in the republic's centennial year of 2023.

Turkey is planning to establish a spaceport while ensuring access to space.

It established a space agency, the Turkish Space Agency (TUA), in 2018. The agency was registered by the International Astronautical Federation in October.

Meanwhile, in August, Turkey prepared the National Artificial Intelligence Strategy, defining priorities that it will be focused on during the period from 2021-2025.

The strategy includes targets to increase the share of artificial intelligence in gross domestic product (GDP) to 5%, as well as add 50,000 jobs in the sector, according to the circular.

Turkey became one of a few countries that could launch two satellites in one year.

It launched two communication satellites in 2021, Türksat 5A and Türksat 5B, using SpaceX Falcon 9 rockets that took off from Cape Canaveral Air Force Station in Florida in the United States, in January and December, respectively.

Türksat 5A and Türksat 5B, which were produced by Airbus, have a 30-year and 35-year lifespan, respectively, while the Turkish domestic industry contributed to the production of the 5B.

Türksat 5B is the most powerful Turkish satellite and will increase the Ka-Band capacity by more than 15 times. It will be capable of transmitting data at more than 55 gigabits in total.

With Türksat 5B, Turkey currently has eight active satellites.

The country also aims to complete the domestically produced Türksat 6A project in 2022, which will make Turkey one of 10 countries that can manufacture its own communications satellites.

The satellite is also expected to be launched by SpaceX in the first quarter of 2023.

The construction of Turkey's new high-resolution observation satellite, IMECE, is also expected to commence in 2022.

IMECE is a remote sensing satellite produced with local resources of up to 60%.

In November, a test drive was made in Istanbul. The car is expected to enter the mass production phase in 2022.

TOGG aims to establish the country's first car battery manufacturing plant, which will be able to manufacture 15 gigawatt hours of battery cells and modules.

The Atak Electric has a range of 300 kilometers (186.4 miles) without interruption thanks to BMW 220-kWh Li-Ion batteries.

In the second phase of a four-phase development process, the company conducted software integration and autonomous verification tests.

While users responded to the move, Turkey's Competition Authority opened an investigation into Facebook and WhatsApp and suspended the new data sharing rules.

The most controversial issue in the update is that the rules will not be implemented for users in the European Union.

Following the suspension, Facebook postponed the update then waived its implementation in Turkey.

During this process, users began to use other applications such as Telegram and Signal, as well as domestic solutions such as Bip and Yaay.

At the same time, as part of Turkey's social media law, which took effect in October 2020, social media platforms adhered to the rules and appointed local representatives.

According to the law, Turkey requires social media platforms that are accessed more than 1 million times daily in the country to appoint local representatives.

Social media firms must respond to requests by the government in the Turkish language and must answer requests concerning personal and privacy rights within 48 hours.

The platforms should publish semi-annual reports on their response rates to such requests.

Social networks that do not comply with court orders to remove illegal content are subject to penalties, according to the law.

One of the largest global defense events, the International Defense Industry Fair, exhibited Turkey's and the world's latest military and technology products in Istanbul in August.

In 2021, Turkey attracted significant technology investments from around the world, while local companies took new steps.

Chinese technology giant Xiaomi opened a production facility in Istanbul in March. Turkey is the fourth country where the brand has production plants.

OPPO, another Chinese mobile phone giant, opened a factory in Istanbul in March while Chinese company TECNO started manufacturing in Turkey with an investment of $35 million and generated 1,000 jobs.

China's TCL, by uniting forces with Turkish major appliances producer Arçelik, began manufacturing mobile phones in Turkey with an annual capacity of 450,000 units, which is projected to reach 1 million in 2022.

China's Vivo rented a facility in the industrial province of Kocaeli for manufacturing mobile phones.

Turkey's Mechanical and Chemical Industry Company (MKEK) opened the Barutsan Rocket and Explosive Factory in the capital of Ankara to reduce the country's dependence on imported aerial bombs, ammunition, missiles and warheads.

Some countries decided to implement sanctions against the Turkish defense industry, especially in aviation.

Canada canceled export permits to Turkey for arms sales on allegations that its technology was being used in Turkish support for Azerbaijan's effort to liberate the Nagorno Karabakh region from Armenian occupation, which was liberated in November 2020.

In 2021, the U.S. began to implement sanctions on the Turkish defense industry and officials related to the implementation of the Russian S-400 air defense system.

U.S. officials claimed the S-400 would be incompatible with NATO systems and would expose next-generation F-35 fighter jets to possible Russian subterfuge.

As a NATO member, Turkey's move triggered discussions and the U.S. decided to implement Countering America's Adversaries Through Sanctions Act (CAATSA) against the country.

According to CAATSA sanctions, which took effect in April, Turkey's Defense Industries Presidency cannot obtain an export license from the U.S. and nor could they benefit from credit packages from the U.S. and related financial institutions.

During the first 11 months of the year, Turkey's defense exports increased nearly 40% to $2.9 billion, while the high technology and technology sector accounted for around 35% of Turkey's exports in the manufacturing sector.

As part of the agreement, the ARSAT-SG1 satellite will meet Argentina's state-owned GSM operator Arsat's requirements and is planned to be produced and delivered by 2024.