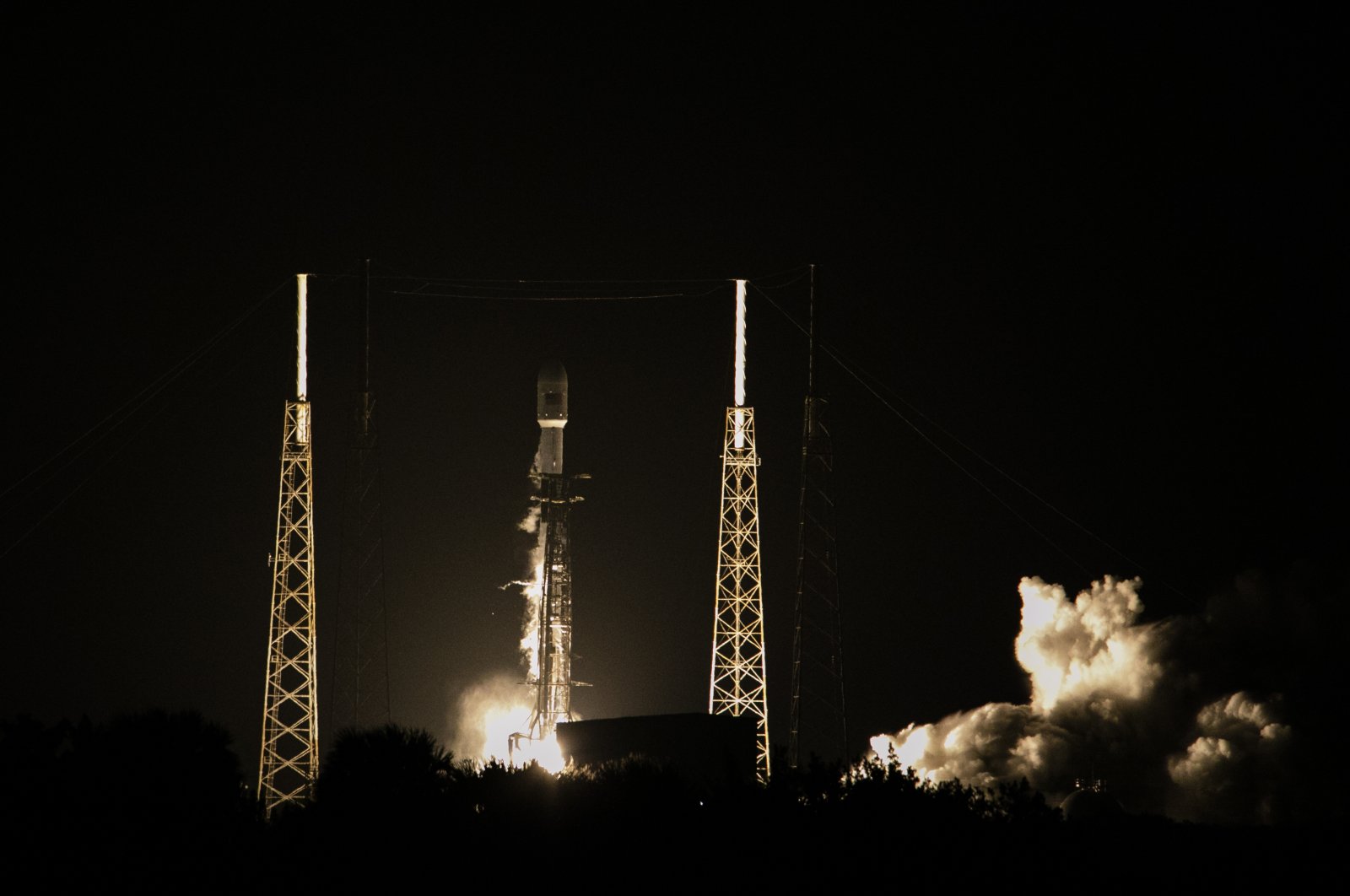 A SpaceX Falcon 9 rocket blasted off from a launchpad in the U.S. state of Florida to deploy a new-generation Turkish communication satellite into orbit late Thursday.

“With the Türksat 5A satellite, Turkey is securing its orbital rights for the next 30 years,” President Recep Tayyip Erdoğan said Friday.

Equipped with the latest technology and higher capacity, Türksat 5A will provide television services and improve broadband data networks. It will be located in an unused Turkish orbital slot at 31 degrees east.

Once the newly launched satellite settles into orbit, Turkey’s active satellites in space will rise to seven, Erdoğan told the special session of Satellite Technologies Week via videoconference at Vahdettin Mansion.

Three of the satellites currently in space are operating for communication, namely Türksat 3A, Türksat 4A and Türksat 4B, while the other three, Göktürk-1, Göktürk-2 and Rasat, are for observation.

The Türksat 5A will settle into orbit in four months and start service in the second half of 2021, according to Turkey’s Transport and Infrastructure Ministry, which also said the nation’s frequency and orbital rights are guaranteed for the next 30 years.

Erdoğan said the satellite will cover Europe, the Middle East and large regions of Africa as well as the Mediterranean, the Aegean and the Black Sea region.

“With this satellite, which has a wide range of services, we are also backing up our existing communication satellites. Turkey is one of 30 countries with the right to orbit in space,” he noted.

The mission also marked the first launch in 2021 for SpaceX and its workhorse Falcon 9 rocket. It also kicked off what should a very busy year for Elon Musk’s company.

“Launch underway,” tweeted Musk as shared the live broadcast of the launch of the Turkish satellite.

Türksat 5A emitted its first signal 35 minutes after the launch, Turkey’s Transport and Infrastructure Minister Adil Karaismailoğlu said Friday, as the satellite was on the way to settling into its orbit.

“This journey will take four months. We will then conduct our tests, and the satellite will be activated,” he said.

Satellite to start service in second half of 2021

Türksat 5A was built through the collaboration of Türksat, Turkish Aerospace Industries (TAI) and Airbus Defense and Space. It was delivered to Türksat officials on Oct. 2, 2020.

Liftoff was previously planned, but the launch was postponed several times.

The satellite will provide Ku-band television broadcast services. It will carry 42 transponders and will be located in an unused Turkish orbital slot at 31 degrees east after all of the orbit and subsystem controls are carried out throughout the stations.

The governance of the satellite will be transferred to the Gölbaşı Satellite Ground Station in the Turkish capital Ankara, and the new satellite will be subjected to performance tests for about a month with commands sent from there.

The satellite is expected to start service in the second half of 2021.

Addressing the Satellite Technologies Week, Karaismailoğlu said the launch is the harbinger of bigger and more proud stages.

He vowed that the country will continue to increase its satellite technology, focusing on the fact that the future is in space, beyond observation or communication satellites.

“The excitement and enthusiasm we are experiencing are too big to fit into words. However, this step is the harbinger of bigger and more proud stages,” he said about Türksat 5A’s launch.

Indigenous satellite to be launched in 2022

Erdoğan went on to say that Turkey is planning to launch its indigenous high-resolution observation satellite IMECE to space next year.

“Our goal is to settle Türksat 6A, the first communication satellite produced by Turkey, in orbit in 2022,” Erdoğan noted.

The production of Türksat 6A is ongoing and is using completely domestic sourcing in the capital Ankara.

It is a product of the collaboration between the Transportation and Infrastructure Ministry as well as organizations and companies such as leading defense firm ASELSAN, TAI and CTech, along with Türksat and the country’s top scientific body, the Scientific and Technological Research Council of Turkey (TÜBITAK).

It will place Turkey among the 10 countries capable of producing their own satellites. The contract for Türksat 6A was signed on Dec. 15, 2014.

2030 space program to be unveiled soon

The country’s 2021-2030 National Space Program will also be unveiled by the Turkey Space Agency soon, the president added.

The agency was established in December 2018 to pave the way for the establishment of a competitive indigenous industry and determine the strategies and policies regarding space technologies.

Erdoğan also said microsatellites are increasingly becoming prominent in the satellite field, stressing that intense preparation is underway for developing such satellites and sending them into space from Turkey.

“For this purpose, we are establishing a microsatellite launch facility in our country. We support the satellite development activities of our public institutions, universities and private sector,” the president noted.

Türksat 5B to be sent into orbit in June

Türksat 5A is set to open a new era in Turkey’s broadcasting services, along with empowering the country in terms of services exports, Karaismailoğlu said.

Stating that the maneuver and service life of Türksat 5A, which will serve in space for 30 years – much longer than other satellites – the minister said that the weight of the satellite, which requires 12 kilowatts (kW) of power, is 3,500 kilograms (about 7,716 pounds).

He said that the country will maintain its work on space and space technologies, saying that testing is ongoing on Türksat 5B, which is planned to launch into orbit in June this year.

Türksat 5B will be sent to orbit at 42 degrees East and is expected to increase the Ka-band capacity of the country.

Karaismailoğlu also said that, with the commissioning of Türksat 5A and Türksat 5B, Turkey's frequency rights will be preserved while gaining new frequency rights for communications satellites for the future generations.

Karaismailoğlu noted that the integration activities of the country’s domestic Türksat 6A's production, engineering and flight model continue simultaneously and that there will be good news regarding the project soon.

Speaking ahead of the launch, Turkish Deputy Minister of Transport and Infrastructure Ömer Fatih Sayan called Türksat 5A “one of the newest generation satellites that give us the opportunity to improve our capability in space.”

“With Türksat 5A, we would be firstly protecting our orbital rights and we would be providing commercial services by means of broadcasting and communications, especially internet services with the Ku-band to the rural areas,” he told reporters in front of SpaceX's mission control center in Cape Canaveral.

Sayan said it will take about 140 days for Türksat 5A to enter into its orbit. Then the satellite will be tested for a month. It will be controlled at the Türksat facility in the capital Ankara.

Turkey’s first communication satellite Türksat 1A was launched into orbit on Jan. 24, 1994, but it fell into the ocean 12 minutes after the liftoff due to a malfunction in the launcher, and the mission failed.

Maintaining investments in satellite technology, Turkey took its place in space in August 1994 with satellite Türksat 1B.

Although the original design life of the Rasat satellite was three years, it successfully completed its ninth year in orbit as of Aug. 17, 2020.

The Rasat satellite, in circular orbit synchronized with the Sun and at an altitude of 700 kilometers (435 miles), operates with 7.5 meters of monochrome and 15 meters of multiband spatial resolution push-broom camera.

Turkey’s other Earth observation satellite Göktürk-1, aimed at meeting the high-resolution image need of the Turkish Armed Forces (TSK) for target intelligence, was launched in 2016.

The life of the 0.5-meter resolution satellite, designed to make exploration at any location in the world without geographical restrictions, is predicted to be seven years.

The satellite has a high-speed data communication that can download an image of a nearly 640-kilometer (397-mile) lane in a single pass.