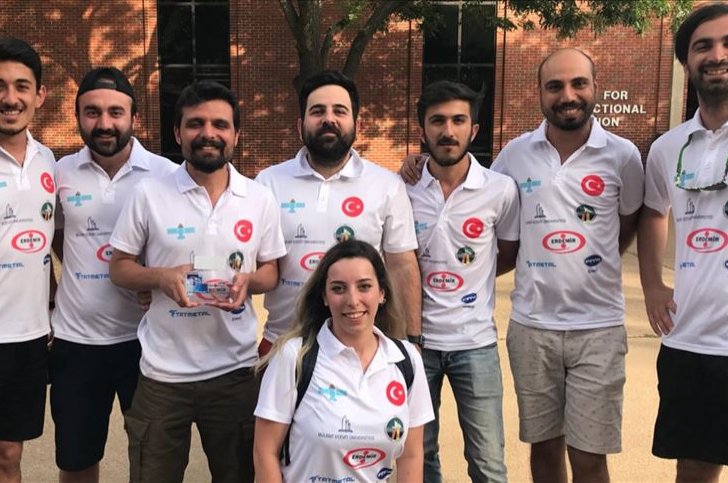 A team of Turkish engineering students will send a miniaturized satellite into space by the end of the year.

"We started working on the PocketQube in 2016, then a newly developed standard in space technology, and developed Turkey's first PocketQube satellite, Grizu-263A," Aytaç Dursun, head of the Grizu-263 Space Team, said.

"The satellite will be sent into orbit in December using SpaceX's Falcon 9 rocket, launched from the Cape Canaveral Space Launch Complex in the U.S.," he told Anadolu Agency (AA).

Established in 2016 by students at Bülent Ecevit University in Turkey's northern province of Zonguldak, Grizu-263 aims to work on space and satellite technologies and participate in international competitions.

"These are very exciting developments for us. A journey from Zonguldak to space," said Dursun.

Grizu, or firedamp in Turkish, refers to a firedamp explosion that occurred in a mine in the area's Kozlu district in 1992, leading to the deaths of 263 miners.

The team head said PocketQubes have minimized the production time and launch costs of satellites, as well as any damage the satellite could receive, offering the producer some great advantages.

"Plus, since we have produced the satellite completely by ourselves, it was a great experience in innovation for us. We have been able to shrink the technology to fit inside a 5x5x5cm [2x2x2inch] satellite," he said.

Grizu-263 came 25th among 96 teams in the competition, which is considered the most prestigious student competition in its field globally.

"We gained a lot of experience and valuable knowledge in that competition," Dursun said.

In light of the experiences gained in the U.S., the team was organized with an institutional structure.

"We started recruiting members through an online application form and accepted candidates into the team after a project and interview. This way, we were able to guarantee members who are eager to work in space and satellites. Currently, we have a 15-person team," he said.

In their second try at CanSat, Grizu-263 finished second.

"On the day of the award ceremony, there were high expectations for the team," he said. "We were sure that we would be in the top five and we completed the competition in the second place," Dursun said. "We were so proud to have achieved such great success as students from a Turkish university. We saw this success as a milestone and have always continued to work hard for our biggest project."

Last year, Grizu-263 participated in the same contest with a different task.

"Our main goal was to have sustainable success. Getting a second place for the second time showed that our initial success was more than luck," said Dursun.

The team competed in the 2020 CanSat Competition but placed fourth.

In addition to CanSat, the team created a unit for Turkey's Teknofest Türksat Model Satellite Competition.

"We completed seven stages of the competition as part of the mission set forth by Türksat engineers and came first in Turkey. We received an award from President Recep Tayyip Erdoğan at Teknofest," said Dursun.

"With these four ranks in three years, we have achieved our goal of sustainable success," he added.

Dursun recommended all space technology enthusiasts who are willing to work in this field "to be process-oriented, not result-oriented."

"Regardless of the outcome, the work they do will shape their future. Therefore, to realize their dreams, they have to continue working without giving up," he added.

"We always felt like we had the backing of the state, especially from our university, both financially and morally. In return for this support, we will continue to proudly represent our country in the international arena of space technologies and gain new successes," he said.