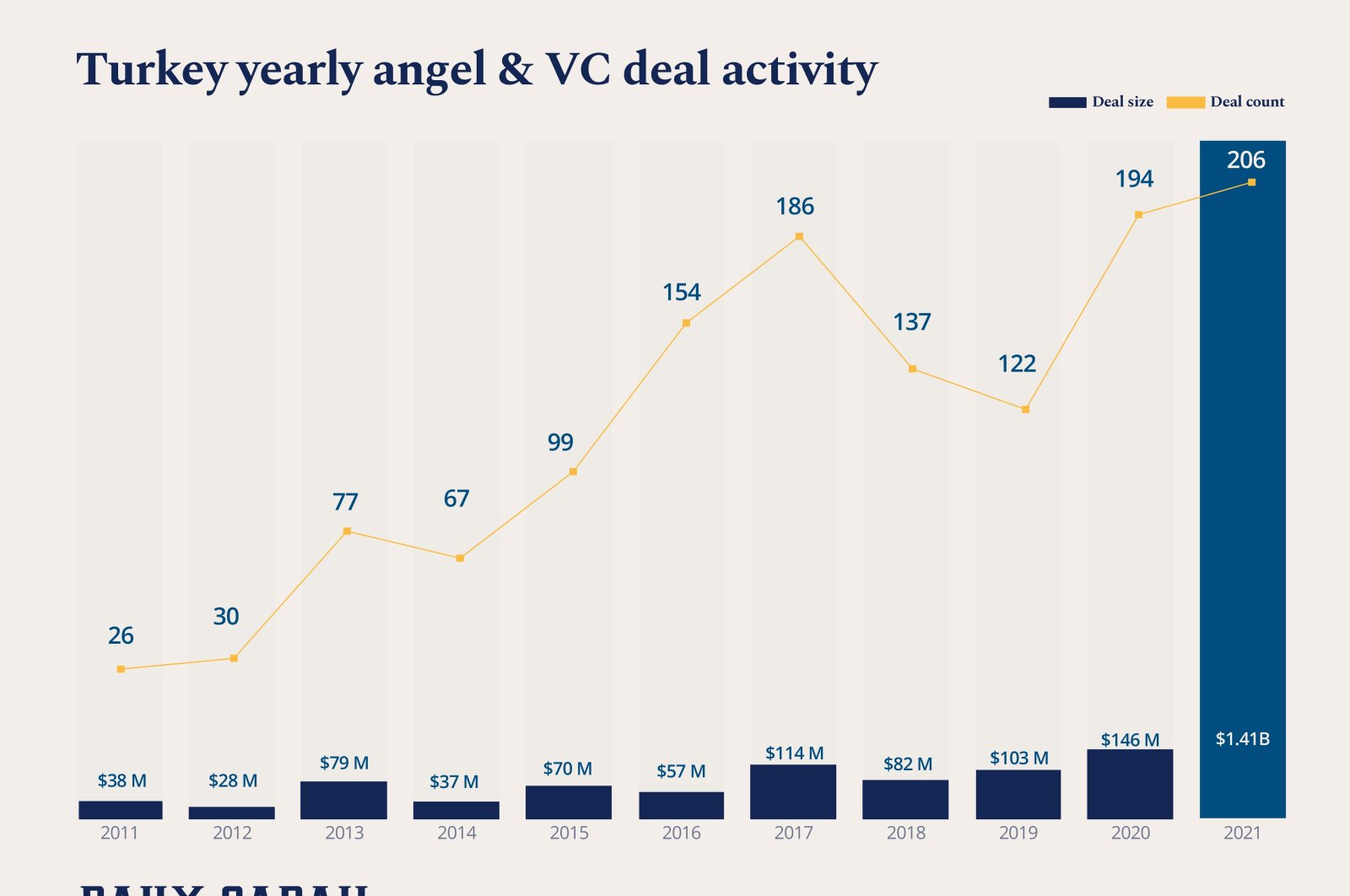 This infographic shows the number and volume of investments made in the Turkish startup ecosystem. (By Büşra Öztürk / Daily Sabah)
by Timur Sırt Oct 15, 2021 2:15 pm

The ventures in Turkey raised more than $1.4 billion through 206 deals from January through September of this year, with the deal volume rising more than tenfold and the number of deals increasing 49%

Capital continues to pour into the Turkish startup ecosystem, as investors further warm up to the nation’s venture scene.

Turkish startups have raised a total of $150 million (TL 1.38 billion) through 69 investment deals in the third quarter of the year, according to data announced during the Turkish Startup Ecosystem Q3 2021 event held this week.

This brought the total investment amount in the first nine months to $1.4 billion, raised through a total of 206 deals. Total deal volume skyrocketed by 1,770% year-on-year, while the number of deals was up 49%.

The event this week was attended by many prominent names, including private lender Işbank General Manager Hakan Aran, Sina Afra, the founder of Tiko, which achieved the largest Series A funding to date in the last quarter, and other active fund managers and entrepreneurs.

The course that started with the coronavirus pandemic has held ground in the first nine months of the year, as the number of investment deals marked an all-time high, with three months still left before the year-end.

The amount of investment per capita dropped to $1.80 in the July-August quarter, down 80% quarter-on-quarter.

One of each five investments poured into game startups from January through September. A total of 40 gaming deals were sealed in the first nine months.

All in all, the ecosystem has achieved its largest figures in both the number of deals and deal volume.

For the first time, a startup received investment from the northwestern Bilecik province via equity-based crowdfunding.

Corporations and corporate venture capital (CVC) funds joined one out of every three investment deals in the first nine months.

The fact that there are fewer female founders in gaming ventures slashed the proportion of female entrepreneurs receiving investments down to 13% to the lowest level in the last five years.

In terms of angel and VC investments, Turkey ranked 13th among the countries in Europe in the third quarter, while it came in fifth in the Middle East and North Africa.

Addressing the event, Işbank’s Aran noted banking will be wherever there is trade and communication, elaborating on the vision and areas they would focus on in the coming period.

Aran said the trade, communication and money circulate in digital networks, noting that banks have opened their doors wherever commercial mobility revolves.

“Banks have to open up to platforms where trade is spinning off. If you ask customers to come and use your application, you will not have necessarily done the banking. Banks should not expect every trader to use their own app. That is why wherever there is trade and data communication, there have to be banks. It has to be on every platform. We open all our doors (application program interface – API) on digital platforms to be active on every platform. We are also making efforts to build our own platform on the e-commerce side with Pazarama,” Aran noted.

“We will support agricultural technology initiatives at Workup. We are starting the Workup Agri program. Secondly, we support social ventures. During the pandemic period, the income distribution of people in some professional groups all over the world deteriorated. That is why we are cooperating with the Koç Foundation on the social enterprise side. For this purpose, we are cooperating with KWORKS, the Entrepreneurship Research Center of Koç University. We will also continue to invest in emerging social enterprises with the Maxis investment fund. In terms of a female venture fund, we also decided to create a new investment fund with a 50% partnership with Arya,” Aran explained.

For his part, prominent Turkish entrepreneur Sina Afra spoke of the journey of his home-buying startup Tiko that started in Turkey and shifted to Spain.

Afra said Tiko’s Series A round lasted longer than he expected. “We closed the investment round in six months. I thought we would have finished it in less time. During the pandemic period, we met with about 40 investors via Zoom. Sometimes, maybe we did not explain in a proper way the work we do. And sometimes they wanted to invest after they got to know us. Yet, we completed it in as long as six months,” he explained.

Afra went on to express the pride when they learned that they had sealed the largest Series A investment to date. He also touched upon the periodic effect of their failure to succeed in Turkey.

“Investors were not looking warmly at investing in Turkey back in 2018. A stable environment is required in real estate. Interest rates were not supposed to be changeable all the time. That is why we did not succeed in Turkey,” he noted.

The company now runs services in seven cities in Spain and Portugal, with France coming up next.

“The emergence of unicorn startups during the pandemic has bolstered morale. Peak, Getir and Dream Games have given us all a boost of morale. Now interest in the Turkish venture ecosystem has increased. Now investors are following the initiatives in Turkey more closely,” Afra said.