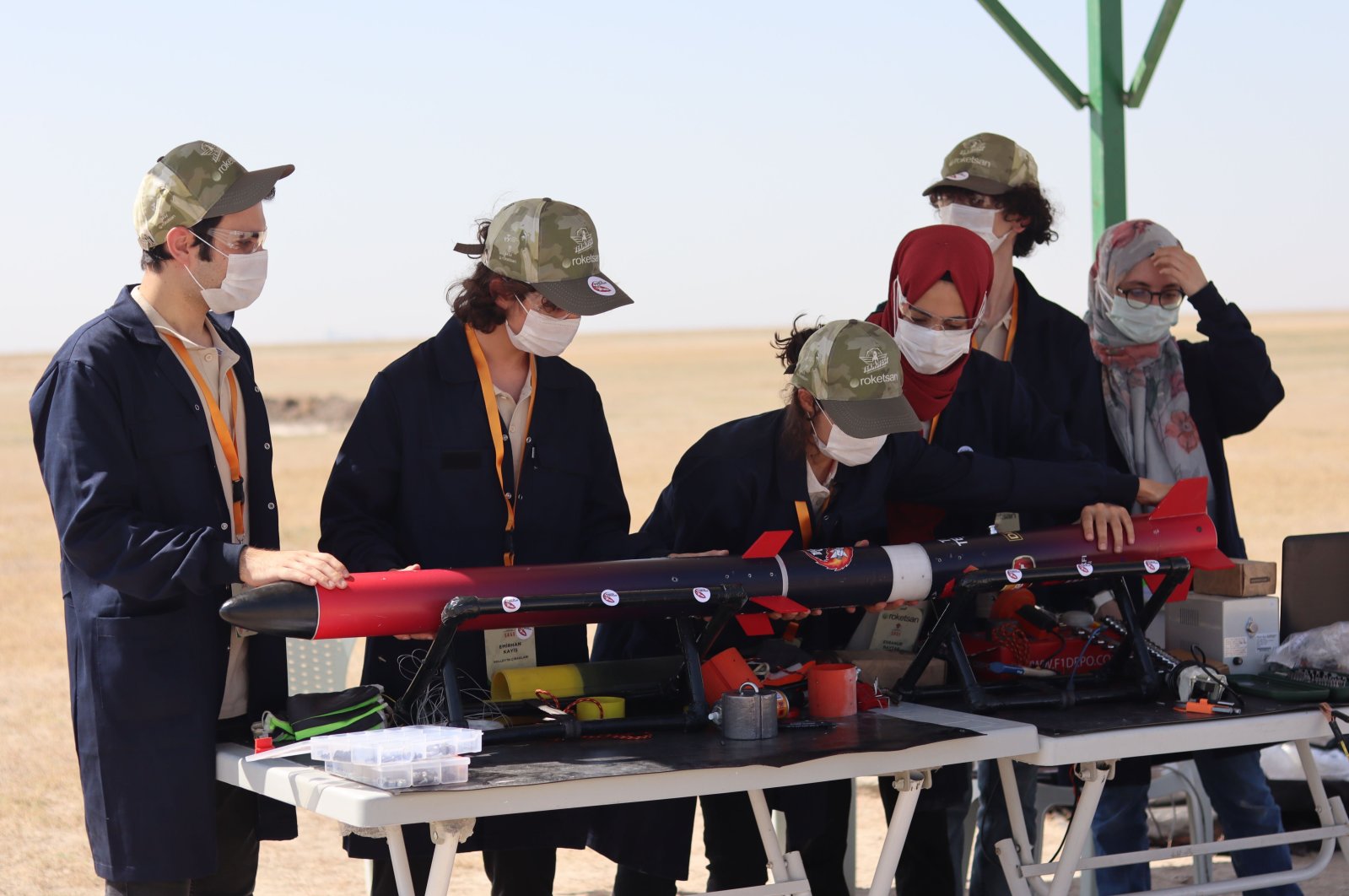 Turkish students from universities and high schools from across Turkey voiced their enthusiasm toward furthering the country's defense industry during a rocket competition organized by leading defense contractor Roketsan as part of the country’s largest aerospace and technology festival Teknofest.

Organized for the third time, the rocket race proved more difficult for students than previous years since their struggle was compounded by the coronavirus pandemic.

“These kinds of activities are highly encouraging,” a student who joined the race in the central province of Aksaray on behalf of Marmara University said. “Our aim is to develop, produce and create the infrastructure of all kinds of technologies in aviation and space in Turkey.”

Co-organized by the Turkish Technology Team Foundation (T3) and the Industry and Technology Ministry, the four-day Teknofest is set to kick off in the southeastern province of Gaziantep on Sept. 24. It was previously scheduled for April but was postponed due to the pandemic.

“Our systems are completely autonomous. We cannot intervene from the ground. Writing software is one of the most key points because it is made by us without importing from abroad,” another member of the five-person team set to participate in the medium-altitude race said, adding that the process of preparing for this day took eight months.

The student added that their Çargah Rocket Team came in first last year in the low-altitude category, which encouraged them to try the next category.

The competition will continue until Sept. 13, after which the results will be announced. While the competing teams complete their montage in one day, they will launch their rockets on the second. Teams will for the first time launch their rockets to an altitude of 20,000 feet in the high-altitude category, which is being organized for the first time this year. The winning teams in the three separate categories will win a prize of TL 50,000 (around $6,700), those ranking second TL 40,000 and those third TL 30,000.

A member of the Çargah rocket team said that the current generation is lucky that it is possible to enhance one’s interest in technology through “code-writing classes that are even found in primary schools as well as informatics classes opened by the Education Ministry.” The student added that rocket competitions are organized in two countries: Turkey, which has been holding races for three years, and the U.S., which has held them for 15 years.

Another student coming from Yıldırım Beyazıt University stated that his goal was “to better shape the future and to contribute to the development of technology. I thank the Industry and Technology Ministry and all contributing institutions as well as the teachers of our university and our rector.”

“It is a program that will have positive effects on the development of our defense industry,” he added.

The youngest team was “Halley’s Apprentices,” with an average age of 16. Emirhan Kayiş, a member of the young team, said the group hopes to participate in the future of Turkey’s defense industry and be fully qualified engineers.”

When asked why the team chose the name Halley’s Apprentices, named after British astronomer Edmond Halley, Kayiş said the group wanted to use someone as an idol who was successful in the field.

Industry and Technology Minister Mustafa Varank as well as Baykar's Chief Technology Officer Selçuk Bayraktar visited the stands of all the competing teams and later watched how the rockets were launched in Aksaray province.

Pointing out that the number of applicants for the rocket race increases every year, Bayraktar said that this showed how the youth’s interest in the technology of the future had grown in Turkey.

Varank said that the aim of this program was to direct enthusiastic youth toward the fields of defense, air and space technologies while igniting an interest in these areas. “The most valuable investments are investments made in people,” the minister said.