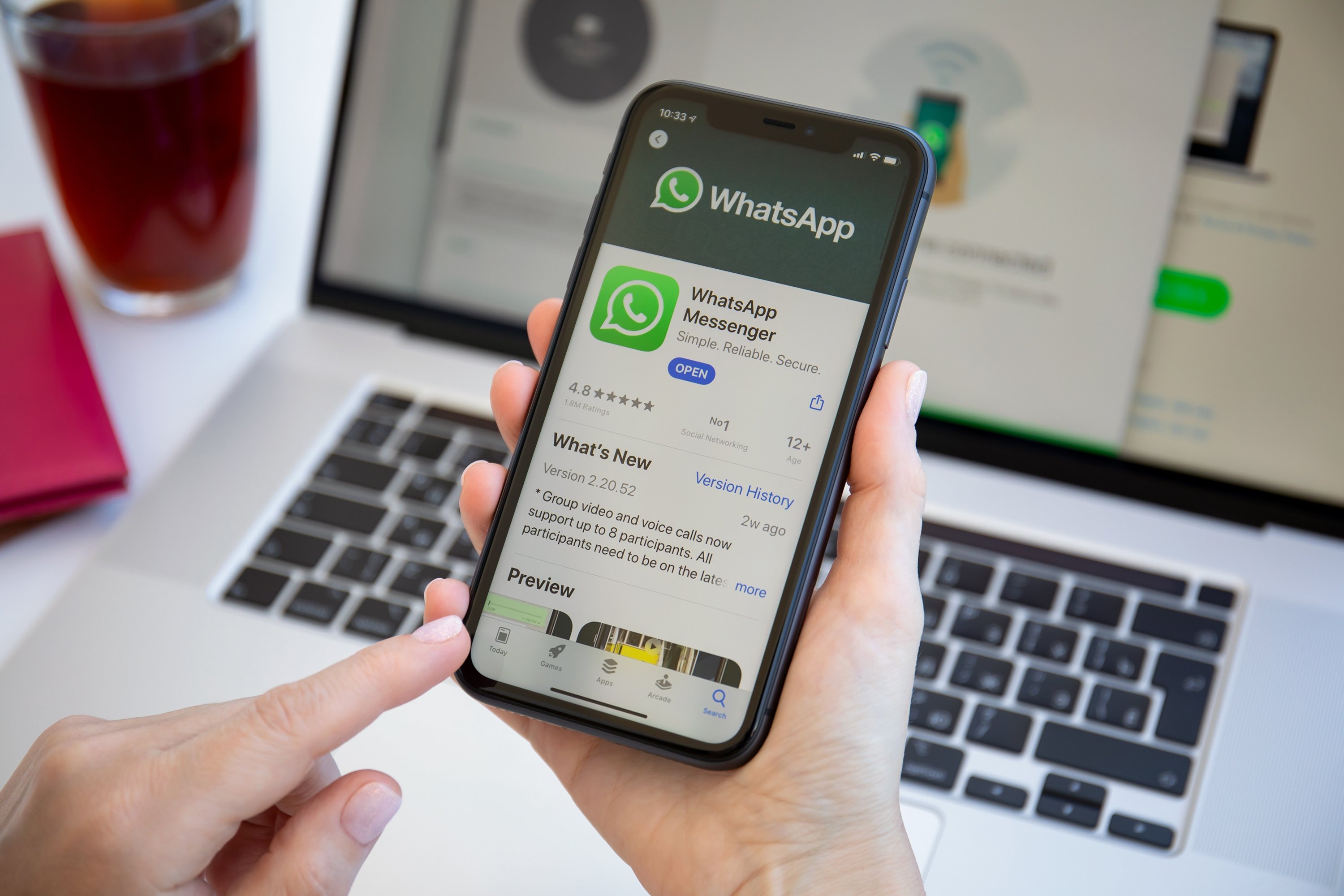 A user holds a phone with messaging app WhatsApp on the screen in the southern resort town of Alanya, in Antalya province, Turkey, June 6, 2020. (Shutterstock Photo)
by DAILY SABAH WITH AGENCIES Jan 08, 2021 2:18 pm
RECOMMENDED

Many in Turkey switched to a local messaging and video chat app after WhatsApp, an encrypted messaging app used worldwide, started forcing users to share personal data with Facebook, its parent company.

In an announcement sent out Wednesday, the platform said users would have to agree to let Facebook and its subsidiaries collect WhatsApp data that includes users’ phone numbers, contacts’ phone numbers, locations and more.

The company is warning users in a pop-up notice that they “need to accept these updates to continue using WhatsApp” – or delete their accounts.

The users must accept the changes or see their access to the service cut off from Feb. 8.

Facebook, which owns WhatsApp, said European and U.K. users would not see the same data-sharing changes, although they will need to accept new terms.

The exception has been welcomed by some as a victory for European Union privacy regulators, according to the BBC.

A section of the international privacy policy has been removed, which previously let people opt-out of sharing personal information with Facebook for the first 30 days after the changes went live.

Instead, the latest alert points users to its online help center “if you would prefer to delete your account.”

The move prompted widespread criticism in Turkey as users took to Twitter to voice their concerns.

There were calls for users to delete their WhatsApp accounts and switch to other encrypted messaging apps such as BiP, developed by one of Turkey’s leading GSM operators, Turkcell.

In a statement Friday, the operator said the app was downloaded by 100,000 people on Jan. 7 alone. The app is being used by millions across 192 countries.

Murat Erkan, the general manager of Turkcell, said the data in BiP is protected by high-security encryption.

“Today, we safely store all data coming through BiP in our data centers in Turkey,” Erkan said in a statement.

The security of personal data tops the issues that users care about most today, he said. “As Turkcell, we have used all our technological infrastructure and knowledge to ensure the safety of our customers,” he added.

According to data provided by Turkcell, around 140 billion messages were sent over BiP in 2020. Calls made over the app reached 2 billion minutes. Some 150 million minutes of video calls were made throughout the year. The app has more than 10 million active users per month. The app has been downloaded by over 52 million people so far.

Elon Musk urges people to switch to other apps

Elsewhere, the move prompted some tech savants, including Tesla and SpaceX founder Elon Musk, to call for users to switch to other encrypted messaging apps such as Signal and Telegram.

Mike Butcher, a TechCrunch editor, said on his Twitter account: "No opt-out. The only way to object is to leave the service & move to a service like Signal or Telegram."

"Signal and Telegram are now better alternatives if you are concerned about your privacy," Butcher said.

He shared comparisons of the data WhatsApp collects versus what Signal and Telegram collect and listed other apps users could consider instead of WhatsApp and Facebook Messenger.

“WhatsApp is likely to lose blood against the rival apps with the update,” Çatak told Ihlas News Agency (IHA).

Facebook aims to monetize WhatsApp by allowing businesses to contact their clients via the platform and even sell them products directly using the service as they already do in India.

“Privacy policy and terms updates are common in the industry and we’re providing users with ample notice to review the changes, which go into effect on February 8th,” a Facebook spokesperson was cited as saying by the Agence France-Presse (AFP) on Thursday.

“All users need to accept the new terms of service if they want to continue using WhatsApp,” added the spokesperson.

The firm said the updated terms will allow additional sharing of information between WhatsApp with Facebook and its other applications such as Instagram and Messenger, such as contacts and profile data, but not the content of messages, which remain encrypted.

In the EU and Britain, the new terms only allow for the development of functionalities for professional users of WhatsApp Business, a company spokesman told AFP.

User advocates warned the update was not legal.

“If the only way to refuse (the modification) is to stop using WhatsApp, the consent is forced as the use of personal data is illegal,” said Arthur Messaud, a lawyer for La Quadrature du Net, an association that defends internet users.

Facebook has come under increasing pressure from regulators as it tries to integrate its services.

The EU fined the U.S. social media giant 110 million euros (then $120 million) for providing incorrect and misleading information about its 2014 takeover of WhatsApp concerning the ability to link accounts between the services.

Federal and state regulators in the U.S. have accused Facebook of using its acquisitions of WhatsApp and Instagram to squelch competition and filed antitrust lawsuits last month that aim to force the company to divest them.